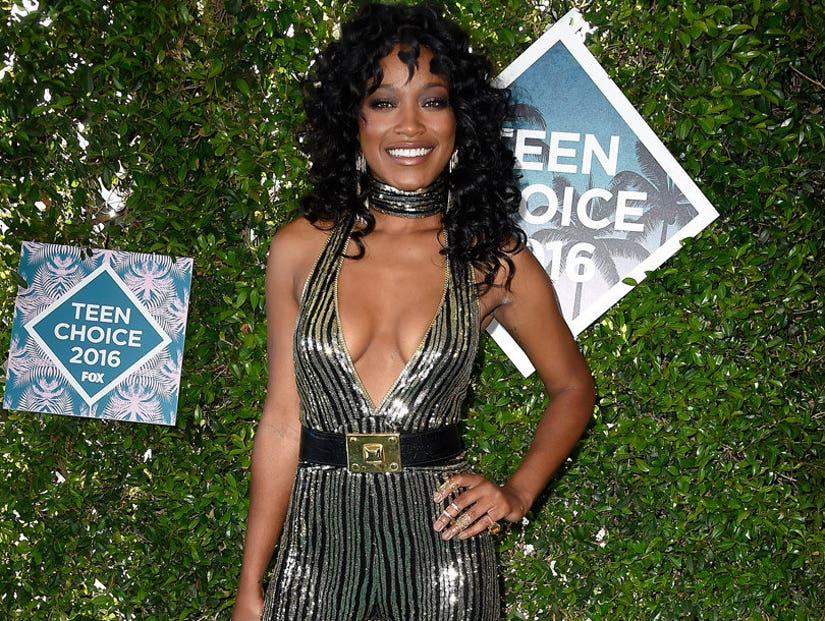 Keke Palmer has no time for the haters.

The "Scream Queens" star recently made headlines for supporting Fifth Harmony star Normani Kordei, after the singer quit Twitter over racist comments. Palmer is no stranger to online criticism herself, recently blasting commenters who accused her of some unsavory activity.

So, how does the outspoken star decide which things are worth fighting for ... and when it's just better to stay silent?

"Anytime I speak up on criticism, I usually pick and chose if it gives me the opportunity to make the situation an example," she tells toofab while promoting her new partnership with Pop Tarts. "If it's some silly stuff, I usually won't reply."

"But if it's something where I can bring something to the forefront, like the idea that celebrities are in some way in a different class or different human than someone who's not a celebrity, if it's an opportunity to bring that perception to the forefront," she explains, "Like, hey, you're saying this, but would you do to somebody wasn't a celebrity? Would you do think this if someone wasn't a celebrity and if gives me the opportunity to break that line, then I'll do it."

If there's one thing her followers love, it's her fierce sense of style. And she's all over the place when it comes to her favorite current trends.

"I'm into bell bottoms, I have jean ones, leather ones. I also love chokers. I'll stack 'em all up, I know that's pretty trendy," she says. "I also love staple pieces, I love crop tops, baby tees, I always tell the kids that my style is #SluttyBaby aesthetic. I like to keep it innocently cute, but at the same time, a little flirty and a little sassy!"

It's that same sensibility she brings to the character of Zayday on "Scream Queens," which is currently filming its second season.

"We're on the 3rd episode. We're happy to be back in L.A., on the Paramount lot, which brings back a lot of good memories for me from 'True Jackson, VP,'" she shares. "This season is totally different, we're not in the school anymore, it's been a couple of years later, we're now in a hospital and it's a totally different type of vibe."

This time around, Zayday is training to become a doctor, teaming up with Season One foe Dean Munsch (Jamie Lee Curtis) to make the world a better place.

"She's trying to save lives, as opposed to the feeling she got when she saw all those people die last season," Palmer tells toofab. "I think that's such a cool aspect of the show, even though it's a hyperreality type of joint, it follows how they're affected by the deaths of last season. She's teamed up with Dean Munsch to help her create this hospital that is all about curing diseases that the world has deemed incurable."

The new season also finds Taylor Lautner and John Stamos joining the cast. "John, I grew up with him as Uncle Jesse," she says of the new addition, "so being on a show with him is just ridiculous, it's like a dream come true!"

Her only complaint: the craft services table needs to update their Pop Tart selection. Palmer has joined forces with country singer Easton Corbin to promote the brand's new soda pop flavors, which are apparently MIA on the "Scream Queens" set.

"I had fun singing Easton's song," Keke says of their collaboration on "Baby Be My Love Song." "It's not that I'm not familiar with that type of music, because I am, but it was cool to sing it and bring my own style to it in honor of the Pop Tarts mashup."

The two also tackled her own single, "Enemiez," from her upcoming EP.

"I'm getting ready to drop my EP, I'm finishing it up this week and I'm very, very, very excited," she teases of the new tracks. "I love to surprise the kids, just because I think it's fun when they don't know when it's coming. It's coming soon, legitimately soon, but I'm not giving the actual dates because I do want it to be a bit of a surprise."