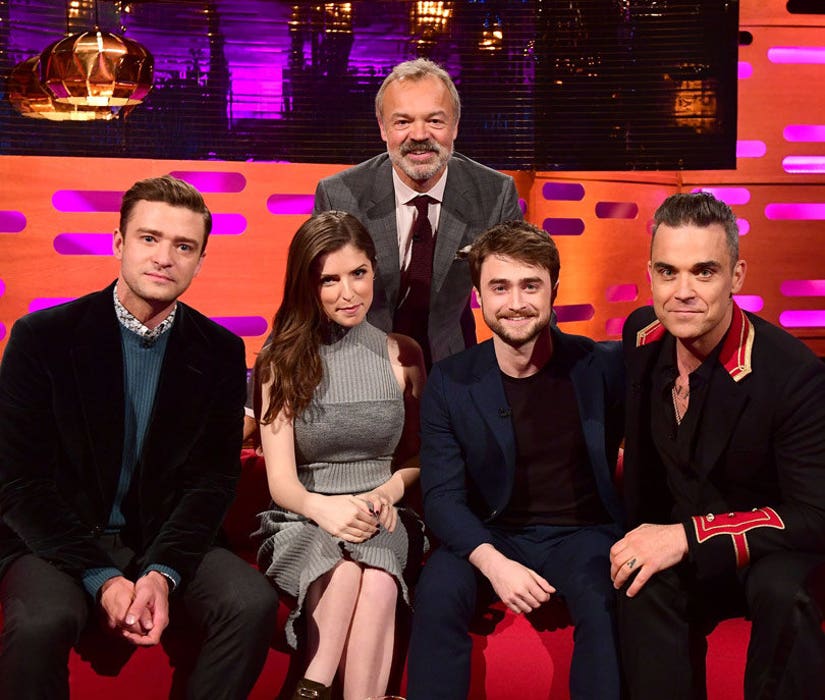 Robbie Williams knows how to tell a good story!

The singer had the entire panel of guests on "The Graham Norton Show" on the edge of their seats -- and in total shock -- as he relayed one of the craziest sex tales they've ever heard.

The question was simple: "What's the maddest thing a fan has given you?" The answer; a four-minute tale that left Anna Kendrick, Justin Timberlake and Daniel Radcliffe totally horrified.

After quipping "Herpes" was the craziest thing he's gotten from a fan, the "Millennium" singer dove into another yarn. Warning: NSFW language below!

"I can't believe I'm telling this but I will. Back in the day, I was renting a castle, that's my life. We were renting to rehearse in for a tour. I was in this big room, I had gone to sleep, I woke up and I was lying in my bed and I was cognizant and I was awake but I hadn't opened my eyes yet," he explained. "I was getting more and more confused because I could swear there was somebody in my room and I could swear that they were sort of tidying up or cleaning or something. I open my eyes and there was a lady at the end of my bed. She could have been anywhere from 28 to 58."

"I was like, wow, this situation is really odd. But you just woke up, so you don't really know what's going on. She looks at me, I look at her and I went 'Alright,' she went 'Alright.'"

"She went, 'Have you got morning glory?'" Williams explained, a British colloquialism for ... well, you can probably figure it out. "This was back in the day when I used to have morning glory. I was like, 'Yeah.' She says, 'I'll wank you off.'"

"She does the dirty deed and it's confusing and I felt defiled and off she went on her merry way," he continued. "That night, I was with the lady who ran the castle and said, 'Your cleaner's weird.' She said, 'We don't have cleaners on Wednesday' It was just somebody who had walked in off the street with a feather duster, come up and gave me a hand job and then left!"

"That's the best thing, we can all go home now, that's the best story of the day," Radcliffe joked after he was done, as everyone on the couch broke out into laughter.

Hear him tell the whole story above -- and see how he found out who the mystery woman actually was at the very end!