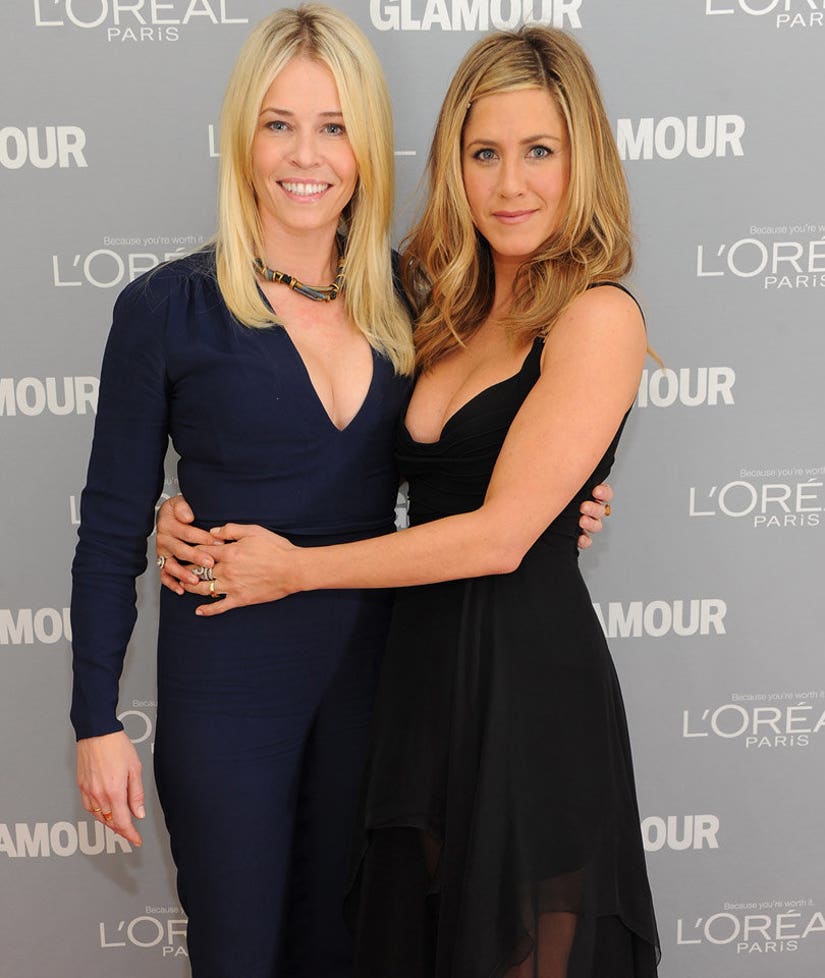 Chelsea Handler has no problem telling it like it is!

The comedienne got extremely candid about her BFF Jennifer Aniston during a new interview with Grazia Daily, where she revealed the whole hype around Jen after Brad Pitt and Angelina Jolie's divorce news was straight up ridiculous.

When news first broke that Brad and Angie were filing for divorce, social media was flooded with gifs of Aniston, celebrating their breakup. Handler herself went on her show to call Jolie a "f--king lunatic," something she stands by now.

"No," she says when asked if she "unfairly criticized" Angelina. "I'm just saying what everyone else is thinking."

"It's so stupid and pathetic," Handler adds of the public and media's reaction to the split. "As if Jen cares – she doesn't care."

"It's ridiculous that people still drag her into this," she declares. "Hello, as if she is sitting around even caring about this."

In the same interview, Handler -- who has long been against the idea of marriage -- says she's finally coming around to the idea.

"I'm totally open to the possibility," she tells the site. "Even though I have absolutely zero prospects. I don't think I've had sex since... I haven't even been on a date in a long time."

Handler has dated some pretty prominent men though -- her exes include rapper 50 cent, Ted Harbert, and Andre Balaz (who's the chairman of NBC broadcasting).

"I think I'm a difficult person to please," she confesses. "I don't think [my being single] has anything to do with anybody other than me."

While the "Chelsea Lately" star sounds open about marriage, she still in no way, shape or form wants to have children.

"I am never having a baby, I've never wanted to have a baby, and I knew that from a very young age," she says. "If someone left a baby on my doorstep, I wouldn't throw it in the garbage, but I'm not going to bring a child into this world – there are enough children in this world."

Handler was also very proud of her pal Jen -- who's routinely the victim of tabloid pregnancy fodder -- for taking a stance about her personal life in an op-ed for Huffington Post earlier this year.

"It was just so nice for her to finally respond to it," Chelsea reveals. "It doesn't matter how famous or rich or wealthy or, you are, you're still able to get your feelings hurt. That is a person, that's a human being that is constantly being scrutinized. I hope it helped people see the pain that it is causing with the presumption and the obsessions and the nonsense."

What do you think about Handler's candid comments? Sound off below and check out the gallery above to see more leading ladies then and now!