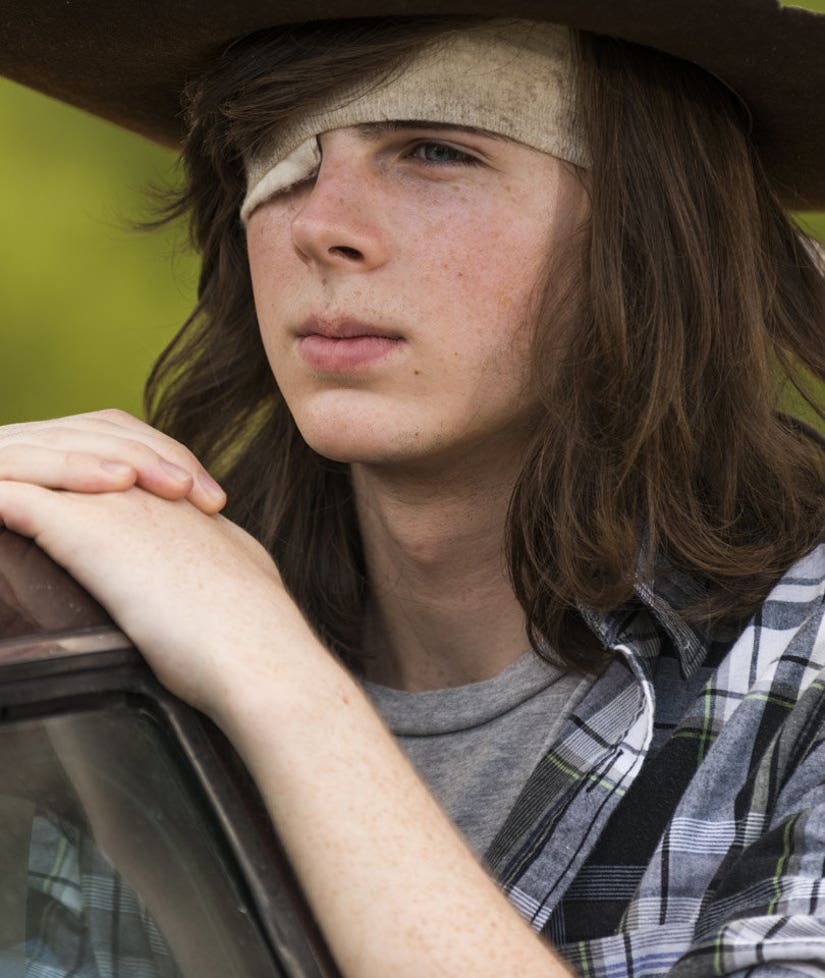 Before tonight's episode, we'd already seen Negan be absolutely terrible, as he killed Glenn and Abraham, burned Dwight's face with an iron and made life a living hell for Daryl and everyone else who lives in the Sanctuary ... including his many "wives."

But if that wasn't enough, "Sing Me a Song" really drives Negan's awfulness home, as he gives young Carl an up close and personal tour of his community and how it works.

Since the majority of Sunday's episode focused on the new dynamic between these two characters, we're going to start with their storyline, before delving into side plots involving Rick and Aaron, Michonne, and Rosita, Spencer and Eugene.

Carl's Horrific Adventure to the Sanctuary

Carl continues his one-man mission to take out Negan, after giving Jesus the slip in the back of a truck heading for the Sanctuary. When the vehicle returns home, Carl whips out a rifle and starts blowing away any Saviors in sight. It's a pretty badass moment from Rick Grimes' son, though he only manages to take out two of Negan's men.

As this is happening, Negan proves how disposable he considers his followers, using one of his men as a human shield. "Damn boy, you are adorable," he tells Carl before the young boy is disarmed by Dwight.

Instead of killing the kid on the spot, this season's Big Bad decides to show the eye-patched wonder around. He first shows the boy how his people all kneel down to him whenever he enters a room, before taking Carl to meet his harem of wives.

In one of the grossest exchanges of the episode, Negan tells Carl it's "cool" if he check out the "titties" on his women. "I don't mind, they won't mind, knock yourself out," he tells the boy, as one of the ladies cries in the corner.

After a conversation with Dwight's ex, Sherry, Negan learns that the bawling wife, Amber, secretly hooked up with her own ex, Mark. When Sherry pleads with Negan to "go easy on her" when it comes to punishment, he tells her he's never hit any of them before. "I know you, there's worse," she replies.

Negan then has a one-on-one with Amber, as Carl watches in the background. He reminds her that she's not allowed to cheat on him and she can go back to Mark and her family whenever she chooses -- but that choice comes with more work and a point system for food. She promises to remain faithful. "It's all gonna work out aces for you," Negan tells her.

Mark, however, not so much.

It's important to note that throughout the episode, Negan continues to taunt Dwight with his relationship with Sherry. He not only makes lewd comments about making love with her in Dwight's direction, he also makes out with her in front of him. It's only a matter of time until the burnt-faced lackey turns, right?

Carl and Negan then have a heart-to-heart in Negan's room, where the leather-clad bad boy demands the teenager remove his eye patch. He eventually relents and it's a nasty sight. "Christ, that is disgusting," Negan tells him, not mincing words. "No wonder you cover that up, have you seen it?! That's gross as hell. I can see you socket!"

After he's done laughing, Negan then tells him it actually looks "rad as hell" and he shouldn't be ashamed. "It may not be a hit with the ladies, but no one is going to screw with you looking like that," he proclaims.

As part of his punishment for killing two of his men, Negan then makes Carl sing for him, hence the title of this week's episode. Rick's son eventually croaks out "You Are My Sunshine," as Negan swings Lucille around like a mad man, sometimes threateningly close to Carl's head.

"That's pretty good, Lucille loves being sung to. It's about the only thing she loves more than bashing in brains," he says, reminding the boy, once again, what he did to the kid's friends. Negan then asks if his mother sang that to him, as Carl reveals he's the one who shot Lori in the head to prevent her from reanimating.

"No wonder you're a little serial killer in the making," Negan tells him. "That was an example of breaking balls by the way." 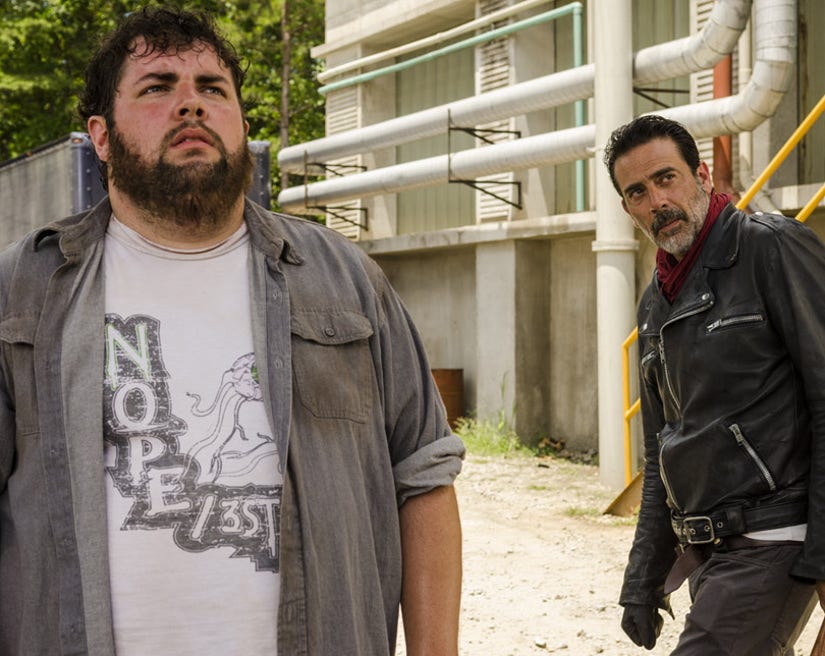 From there, it's time to punish Mark for his indiscretions. Poor, poor Mark.

Not only did he have sex with one of Negan's wives, but he did it while putting off some of his own work in the compound, making it doubly bad for him. "What's about to happen is going to be hard to watch," Negan tells the community, as Mark is tied up in front of everyone. "I don't want to do it. I wish I could just ignore the rules and let it slide, but I can't. Why?"

It's the iron for Mark, as Negan presses the heated appliance to the man's cheek, horrifically burning it in the process. "That wasn't so bad now, was it," Negan asks after. Yes, yes it was.

Carl and Negan then have another chat, where the boss says he's not sure what else to do to the boy to punish him for his actions.

"It's more productive to break you, more fun too," he tells the teen. "You're a smart kid, what do you think I should do? You know I can't let you go, so, do I kill you, iron your face, chop off your arm, tell me?"

"I think you should jump out the window to save me the trouble of killing you," he replies, before Negan tells him they're going to "take a trip."

Everything up until this point plays out exactly how it happens in Issues 105 and 106 of the original "Walking Dead" comics, right down to Negan's awkward and off-putting comments about his barb wired-covered bat, Lucille, having lady parts. So far, the show is taking things almost word-for-word from the source material when it comes to Negan, only deviating tonight to include Daryl in the narrative and in the episode's final moments.

In another comic moment, Negan returns to Alexandria to find Rick MIA. He then makes a pass at Olivia after once again fat-shaming her. Her response: a slap to the face! Anyone else glad to see that moment make it to the TV show?

The episode ends with a new scene showing the foul-mouthed antagonist and Rick's two children sitting on the porch together, as the bad guy muses about moving in. "I like it here. I might just have to stay here. I was thinking about what you said earlier Carl, maybe it is stupid keeping you and your dad alive," he says. "Why am I trying to hard? Maybe I should just bury you both in those flower beds. I could just settle into the suburbs."

Thankfully, developments in the side storylines tonight might prevent that from happening. 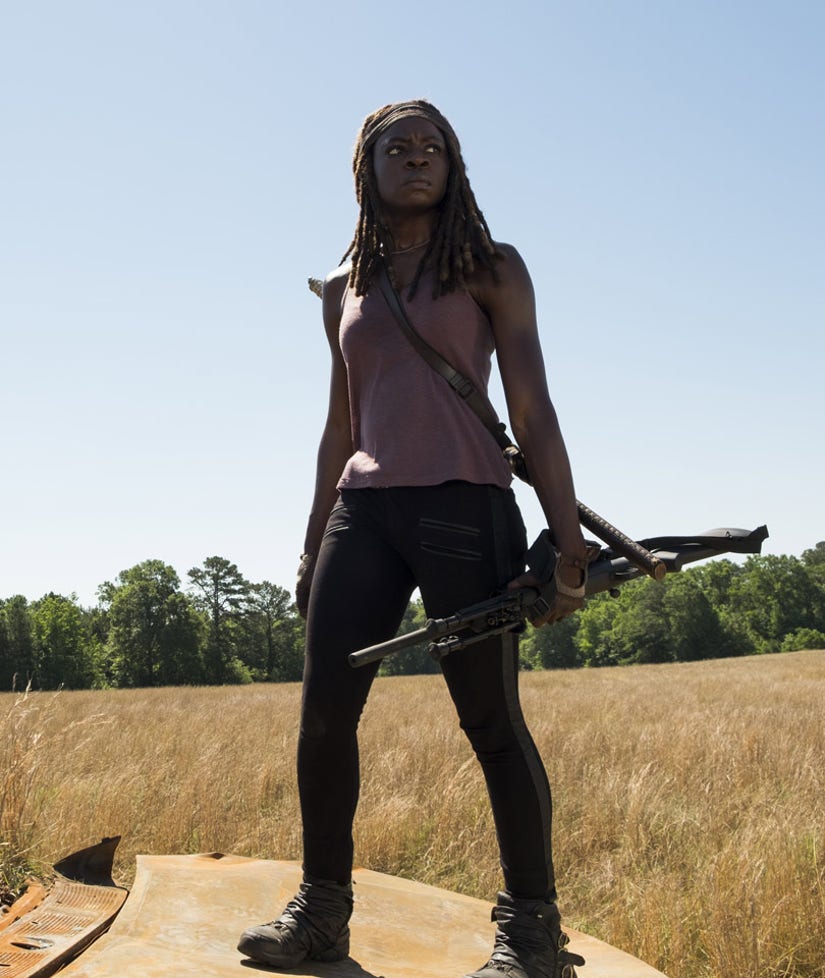 Next week is the mid-season finale, so we're expecting at least one casualty before the final credits roll. Who do you think will bite the bullet? 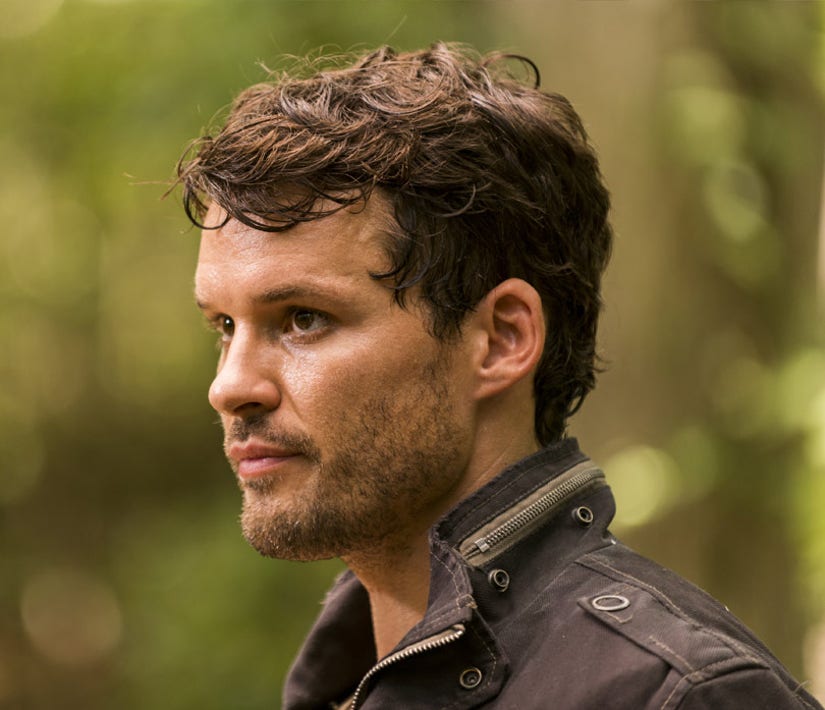 While the show likes to remix things from the source material, they've been sticking pretty close this season. In the comics, Spencer attempts to talk Negan into killing Rick when they get some one-on-one time in Alexandria. That doesn't go well for him though, as the villain eviscerates him for not having "any guts" by sneaking around behind Rick's back. Given this week's developments, we could easily see this happening during the finale.

We're also slightly worried about Shelly. If she's the one who helped set Daryl free, she could be offed by Negan -- and that would be the precise thing that finally makes Dwight turn on his master.

What do you think will go down? Sound off in the comments!