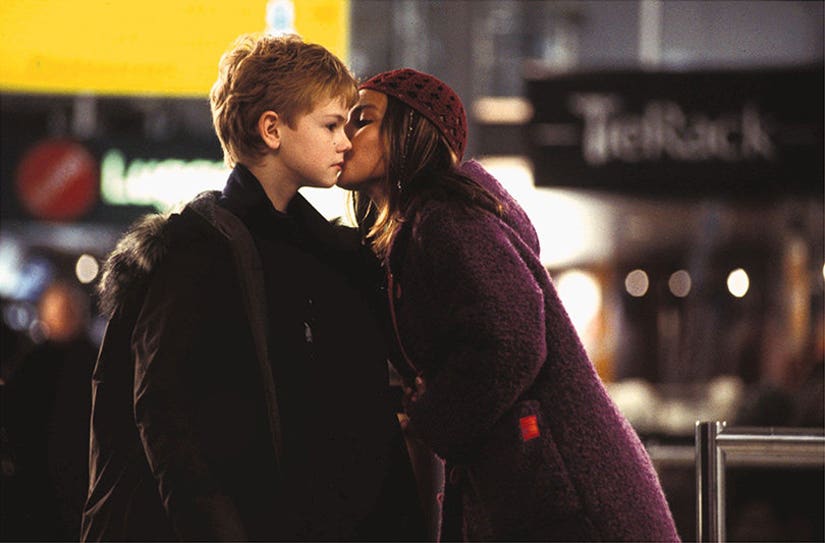 The film starred a who's who of British cinema, with Hugh Grant, Liam Neeson, Colin Firth, Emma Thompson, the late Alan Rickman, Keira Knightley, Bill Nighy, Mr. Bean and even "The Walking Dead's" Andrew Lincoln long before the zombie apocalypse.

But it was writer/director Richard Curtis' storyline involving Neeson's character overcoming the loss of his wife by helping his son (Thomas Sangster) connect with his school crush that really stood out.

TooFab caught up with Olivia Olson, who played the young and talented "All I Want for Christmas" singer Joanna, where she spilled some secrets from the set.

Plus, see Olivia and Thomas now in the gallery above!

Is there a story from the set you haven't shared before you'd be willing to share with TooFab?

The films director Richard Curtis kept pulling me aside to remind me to smile. He told me I looked "absolutely dreadful" when I don't smile. I guess I had R.B.F. [Resting Bitch Face] back then too.

What was it like to film that kiss? We've read it was your first ever — do you know if it was Thomas' too?

The movie premiere in New York, actually. As you can imagine there was a lot going on!

With him living in England, we don't exactly run into each other. Somehow our paths crossed playing love interests again on Disney's animated series "Phineas & Ferb," which I think is a pretty twisted coincidence.

Did you ever think the movie would become such a classic? How often do you watch?

I had no clue the movie would be so huge!

It was the first feature film I had ever auditioned for. As a kid & an actor, really you can't even imagine that type of thing. You hope for it but no one know's what is going to blow up. I definitely catch parts of the movie every year because it's everywhere!

Your All I Want for Christmas performance is also a memorable moment. Were there nerves for that scene?

Oh yeah, there were nerves. Mostly about my teeth? I lost 4 teeth on the set of this movie. It was a bit of an ordeal. I couldn't open my mouth very wide when singing, because scenes filmed weeks before but on the same day in the movie would have looked odd.

Where should fans look out for you next?

You can catch me singing & voicing Marceline The Vampire Queen for "Adventure Time" on Cartoon Network & Hulu. And I will be releasing a record on iTunes in the New Year. Keep a look out!