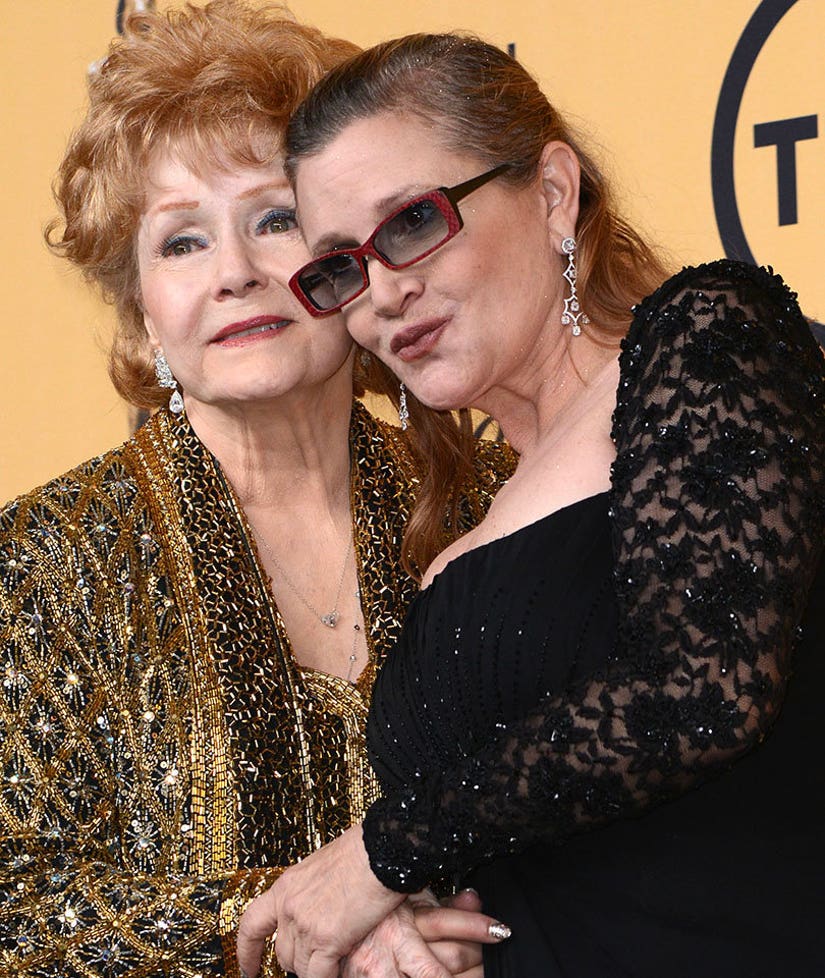 Hollywood is in mourning after the death of iconic Hollywood actress Debbie Reynolds -- and stars are sharing their reactions on social media.

Reynolds died Wednesday night after suffering a stroke at her son, Todd Fisher's, Los Angeles home. The two were discussing funeral plans for Carrie Fisher, who died on Tuesday.

Reynolds leaves behind son Todd, as well as granddaughter Billie Lourd, who is the daughter of Carrie Fisher.

Debbie Reynolds, a legend and my movie mom. I can't believe this happened one day after Carrie. My heart goes out to Billie.

So heartsick. Debbie went to be with Carrie. It's such a devastating 1,2 punch. She was my "mom" for years & I loved her dearly.A legend.

The combination of the loss of @carrieffisher & then her mom @DebbieReynolds1 is too much. I'm really at a loss here... #toomuch16

Some of the magic people have left the tribe...for the moment I am inconsolable...💔💔💔

Rest In Peace, Debbie Reynolds. What a terrifically sad few days. Be with your daughter again. pic.twitter.com/vziWesPeDi

The most incredible love is when one can't live without the other...#RIP #DebbieReynolds

Is this for real?!!!! My GOD. As a young girl, my mother would take me to Debbie Reynolds dance… https://t.co/47dFsSJBcb

Thoughts and prayers go out to the families of @DebbieReynolds1 and @carrieffisher Unbelievable loss in such a short time. pic.twitter.com/m3m771qNvb

When I first walked up to @carrieffisher's door she answered it with @DebbieReynolds1 on her arm (and George Lucas the other!) I am so sad

To lose your child,is a grief maybe too much to bear #RIP Debbie Reynolds.

I can't imagine what Carrie Fisher and Debbie Reynolds' family are going through this week. I send all of my love.

Debbie Reynolds was one of the last of Hollywood Royalty. It breaks my heart that she is gone. I'd hoped that my grieving was done for 2016.

The loss of #DebbieReynolds 1 day after #CarrieFisher is epic. 2016 has taken a piece of all of us.

So sad to learn of @DebbieReynolds1 passing ...an American icon and Hollywood legend. pic.twitter.com/OHh7VtsAAW

I think this photo of #DebbieReynolds sums it for us all. pic.twitter.com/2ph39wjQ1V

RIP Debbie Reynolds... bless her... She was a Treasure...

My thoughts go out to #BillieLourd and hope she is okay. #DebbieReynolds and #CarrieFisher is too much for anyone to take.

HOLLYWOOD JUST GOT A LOT SMALLER: SADLY YET ANOTHER LEGEND HAS PASSED, DEAR CARRIES MOM NOW GONE AS WELL! TRAGIC DAY IN HOLLYWOOD!

My thoughts and prayers are with the family during this time of unimaginable loss. Two generations in two days. https://t.co/TI4D4hWkbc

Dear Debbie Reynolds, I totally get it. Hug her so tight for all of us.

It is beyond astonishing that both @carrieffisher & @DebbieReynolds1 have left this earth. I overwhelmingly adored & admired them both. 😢🌹🌹 pic.twitter.com/emLn1ZvwUd

I can't imagine what kind of pain the family of Carrie Fisher and Debbie Reynolds are feeling right now. My prayers are with them.

There is nothing harder than having to bury a child. Debbie died of a broken heart, but she's with her daughter now. https://t.co/G3pcQCoViK

Today is officially a sad day. As a mother my heart goes out to Debbie Reynolds and her daughter Carrie Fisher. RIP DB and CF

Debbie Reynolds helped light my passion for performing with Singin' in The Rain. She will always be an icon. Rest with Carrie, Debbie.

Debbie Reynolds, God is holding you and Carrie in his hands.
We will always speak your name🌈
Love you, Debbie Allen

There are no words left. RIP #DebbieReynolds

#HEARTBROKEN @DebbieReynolds1 has passed away. The losses of 2016 are too much to bear. Thinking of everyone at @DRdancestudio #RIP

Such sad news to report, but word has just come in that Debbie Reynolds died. Her son's statement said "She's with Carrie."

How shocked we were to learn that Debbie Reynolds passed away just a day after her daughter Carrie. I loved & worked both of these icons.

Heart is hurting... so sad

My favorite Debbie Reynolds recording. She was one of the last of the true H'wood talents: actress, singer, dancer: https://t.co/67zWUUHDhv

Ms.Reynolds has gone to be w/her daughter in Heaven. May the family find peace & feel the love the world has for them pic.twitter.com/c0VOIKbMel

My heart is breaking over Debbie Reynolds and I am sending all my light and strength to Billie Lourd.

Wow wow wow. Peace and love to everyone tonight. https://t.co/Ofth8UVJzi

Wow wow wow. Peace and love to everyone tonight. https://t.co/Ofth8UVJzi

My heart goes out to the Fisher/Reynolds family right now. Awful loss. Debbie Reynolds was a legend & I can only hope she's with Carrie now

This. Just this devastatingly moving photograph. Just this. pic.twitter.com/PKTT7gPbBI

For Carrie and Debbie
✨🕯🌟🕯✨
My thoughts and love are with their family. pic.twitter.com/2fLWu3a9Sg

Carrie would've LOVED this Tweet and, maybe through you, she sent it? https://t.co/lJijTeghL2

Lord, Debbie and Carrie. RIP 2016 has seen a lot of sadness. Prayers for their families & so many others affected by loss.

That is the saddest thing. So sorry for the whole family. Rip #CarrieFisher and #DebbieReynolds. 💔

Too sad for words our deepest profoundest condolences 2 the family of @DebbieReynolds1 The world lost two treasures pic.twitter.com/epbEVoo8IU

i love you billie. so so much. rest in peace, debbie reynolds.

Ah what now, her poor mother? Did a movie with Debbie Reynolds once. Full of energy and fun. No surprise she stole the show. She was 80. RIP

Oh no we just saw the news about Debbie Reynolds. Absolutely heartbreaking...there are just no adequate words for how sad it all is...

#DebbieReynolds has just died. This is too hard to comprehend. Beautiful, talented, devoted to her craft, she follows Carrie, dead days ago.

There are no words. Just that we all want 2 surround Billie with loving strength & support. Please give her space media. Please. Please.

Truly heartbroken to hear @DebbieReynolds1 has died. She was a wonderfully warm friend and colleague. Praying for Todd & Billie. #RIPDebbie pic.twitter.com/P85OVsMBUt

One of THE GREATEST BITS OF CINEMA EVER. https://t.co/3unXfhcHf8

Damn. RIP Debbie Reynolds. Legendary entertainer. I'm sure broken hearted by the loss of her daughter.

debbie reynolds died the day after her daughter did.... dying of a broken heart is legit😢 #rip

Deepest condolences to the family of Debbie Reynolds. I was just notified of her passing. Such a talented charming lady & a good mother -B pic.twitter.com/83hIROaXSc

So blown away and saddened by this Debbie Reynolds news a day after her daughter, Carrie passes away. So much luv & strength to their family