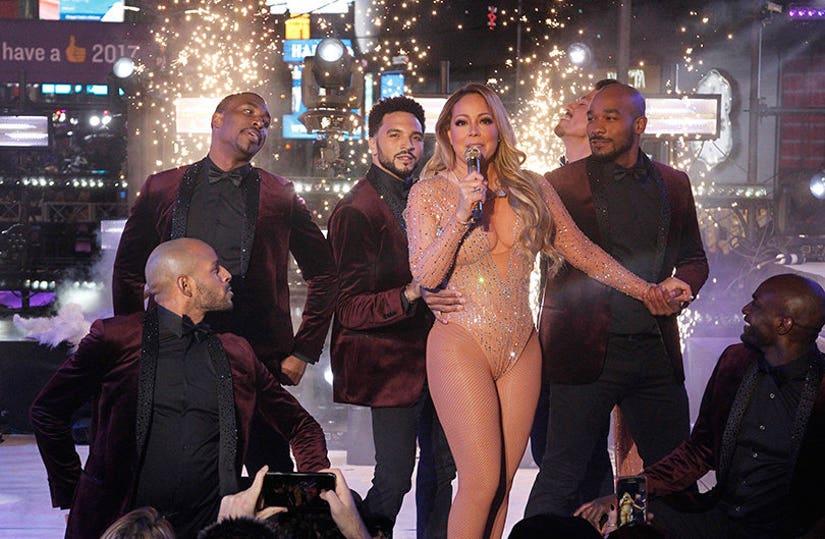 UPDATE: Dick Clark Productions released the following statement about Mariah's performance to TooFab -- after sources in Carey's camp told TMZ they believe she was intentionally "sabotaged." Carey's rep also told Billboard she believes "production set her up to fail."

As the premier producer of live television events for nearly 50 years, we pride ourselves on our reputation and long-standing relationships with artists. To suggest that dcp, as producer of music shows including the American Music Awards, Billboard Music Awards, New Year's Rockin' Eve and Academy of Country Music Awards, would ever intentionally compromise the success of any artist is defamatory, outrageous and frankly absurd. In very rare instances there are of course technical errors that can occur with live television, however, an initial investigation has indicated that dcp had no involvement in the challenges associated with Ms. Carey's New Year's Eve performance. We want to be clear that we have the utmost respect for Ms. Carey as an artist and acknowledge her tremendous accomplishments in the industry.

Mariah Carey is saying "Shake It Off" over her failed New Year's Eve performance.

The singer had one disastrous night in Times Square on Saturday in NYC, when she failed to complete any of her planned performances for Ryan Seacrest's "New Year's Rockin' Eve" -- but in Mimi's eyes, it's no big deal.

Shit happens 😩 Have a happy and healthy new year everybody!🎉 Here's to making more headlines in 2017 😂 pic.twitter.com/0Td8se57jr

Her post came after she had severe audio issues during the performance, where she was supposed to sing "Emotion," "We Belong Together" and "Auld Lang Syne."

Throughout the live gig, Carey told the audience she couldn't hear through her earpiece, telling them she was still "trying to be a good sport." "We didn't have a [sound]check for this song, so we'll just say it went to number one," she added.

She added that the track was missing "some of the vocals," but "it is what it is."

Carey ended the train wreck by saying, "That was ... amazing" and "It just don't get any better."

A rep for ABC had no comment. A publicist for Dick Clark Productions was not immediately available.

Singer Josh Groban sounded off on the performance while watching it unfold last night. "Any time one of the greatest voices of my generation lip syncs an angel loses its wings," he tweeted, seemingly referring to the incident.

After getting some less-than favorable responses, he deleted the tweet and apologized. "Deleted my tweets about a certain performance because it was made in humor but taken way more meanly than intended. Not out to diss artist," he wrote.

Jennifer Lopez also addressed the performance on social media, by liking a comment on Power 106 KMEL Big Von's Instagram page. After Von shared a video of the performance, one follower commented, "Ever seen an accident you couldn't take your eyes away from? That was her tonight!" When you take a look at the likes for that comment, one of them is from Lopez's official Instagram account.

Mariah and J.Lo have had beef in the public eye for years, after Carey's infamous "I don't know her" diss.