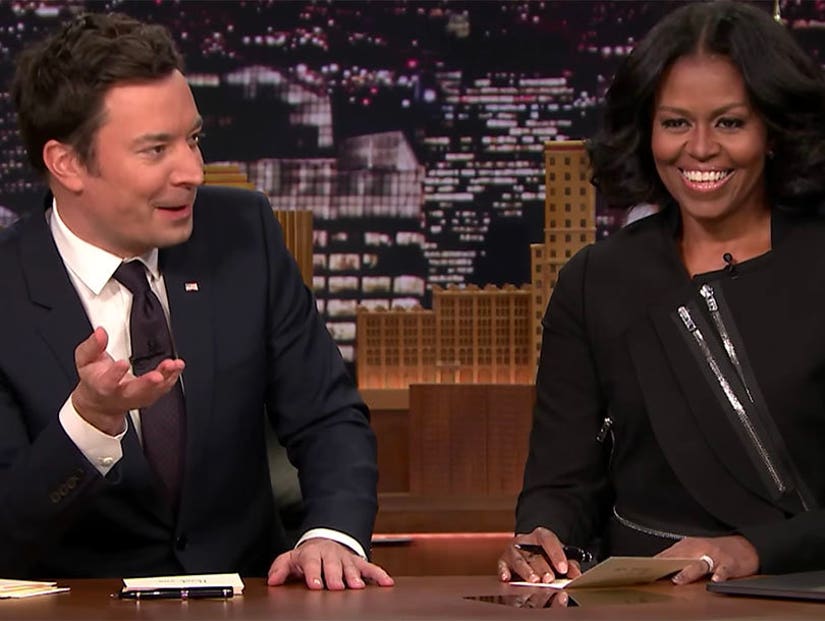 Michelle Obama marked her final "Tonight Show" appearance as first lady on Wednesday, in which she reflected on the past and future, played Catchphrase with celebrity pals and wrote Thank You Notes with Jimmy Fallon.

During Wednesday's episode, Obama revealed what her biggest concern will be once she and Barack depart the White House.

"When I think about the fact that some of them are afraid about what's to come ... I don't want them to be afraid," she said. "I want them to embrace the future and know that the world is getting better. We have bumps in the road, we have ups and downs. But I want our kids to move forward, I don't care where they come from, with strength and with hope."

She confessed to Fallon these last weeks have been far more emotional than she anticipated.

"I didn't think it was going to be that emotional. It's been surprisingly emotional for all of us in ways that we didn't expect."

FLOTUS also expressed support for president-elect Donald Trump as well as his family during their time of transition.

"This democracy is not about party," Obama said. "We're all trying to get things done. We're going to be supportive to the Trump administration for as much as we can be."(Read more story below and see video below)

Obama and Fallon also wrote 'thank you' notes to commemorate her eight years as the Commander-in-Chief's right-hand woman. Sitting alongside Fallon to write the notes on Wednesday night, the band struck up a somber, mournful song on the piano while Obama wrote her first note -- to her husband, President Barack Obama.

"Thank you, Barack, for proving you're not a lame duck," the First Lady wrote, "but my very own silver fox." The audience sighed in satisfaction while Obama smiled politely and handed her letter over to Fallon.

The tone turned serious as Fallon's turn was filled with gushing over the First Lady, but concluded with a remark that made the audience roar with laughter.

"Thank you Mrs. Obama for being a smart, strong, independent woman, an activist, a style icon, and a great dancer. And showing us all what it would look like if Beyoncé had married a much nerdier Jay Z," Fallon joked. Obama, standing by her man, laughed said, "That's my boo! Mom jeans and all."

Fallon wrote a final zinger: "Thank you Mrs. Obama for always promoting physical fitness. And since you like exercise so much, how about running for President?"

In another segment, Obama supporters were recorded in-studio thanking the FLOTUS under the guise that messages would be compiled into a montage as gift for the First Lady. Little did the guests know, she was just behind the curtain and would come out to personally respond to her supporter's commendations.

One of the guests burst into tears and said, "I did not expect this. Yesterday I was eating pizza bites and sitting in my bed." Another guest turned out to be a former college chum of Obama's.

Watch the tearful video (below).

See Stevie Wonder and The Roots serenade Obama with a medley of "Isn't She Lovely" and a specialized version of "My Cherie Amour."