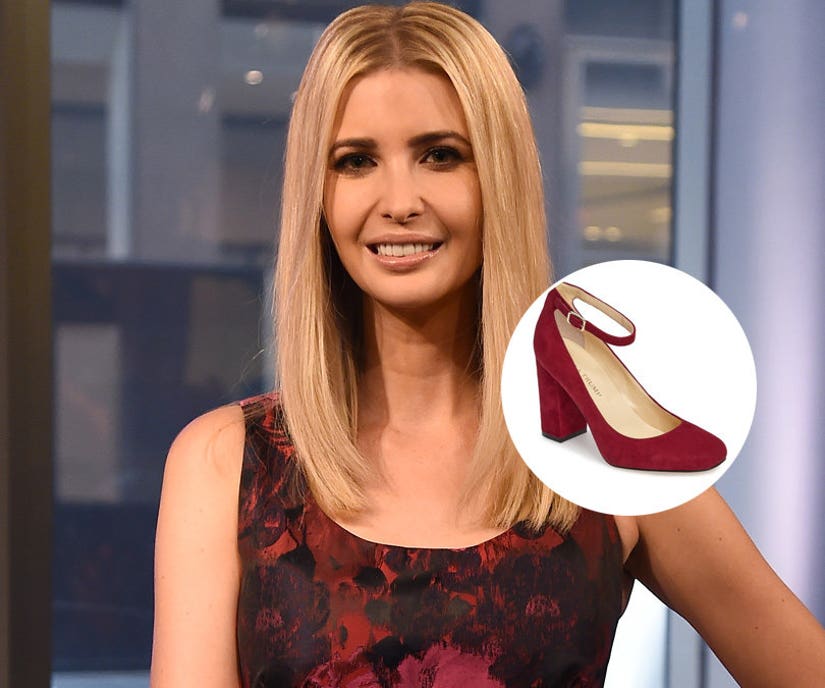 The Ivanka Trump brand continues to expand across categories and distribution with increased customer support, leading us to experience significant year-over-year revenue growth in 2016. We believe that the strength of a brand is measured not only by the profits it generates, but the integrity it maintains. The women behind the brand represent a diverse group of professionals and we are proud to say that the Ivanka Trump brand continues to embody the principles upon which it was founded. It is a company built to inspire women with solution-oriented offerings, created to celebrate and service the many aspects of their lives.

A spokesperson added Nordstrom ordered shoes and apparel for spring, but only moved forward with apparel, which can be found in stores. Nordstrom didn't immediately reply to our request for comment.

Nordstrom has decided to drop Ivanka Trump from their inventory of brands.

Shoppers first noticed that the Ivanka Trump brand had seemingly disappeared from the Nordstrom website. By mid-day Thursday, inventory was remarkably sparse on the online store, and by the end of the day, there was nothing.

"We've got thousands of brands – more than 2,000 offered on the site alone. Reviewing their merit and making edits is part of the regular rhythm of our business. Each year we cut about 10% and refresh our assortment with about the same amount. In this case, based on the brand's performance we've decided not to buy it for this season," a spokesperson told TooFab in a statement.

"Over the past year, the brand's performance has declined and have reached a point where our buying teams have decided not to move forward with buying additional product for now."

"We've offered the brand in multiple categories and divisions (Shoes, Apparel, Accessories, Nordstrom, Nordstrom Rack and online). Because of variations in things like when orders were placed, when they're delivered and when they sell through, we'll continue to have it available for a while."

Their customer service Twitter page also replied to customers this morning, saying the decision was solely based on weak sale numbers, and not politics. 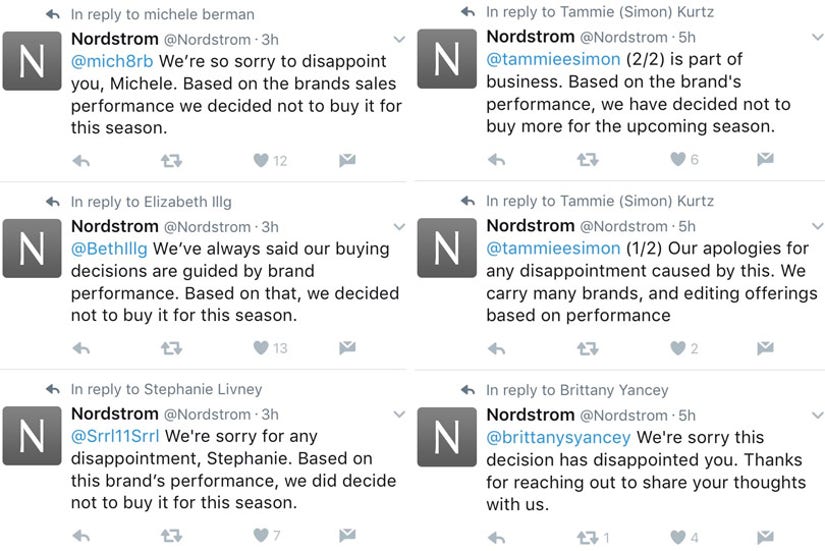 This comes just a few months after the #grabyourwallet movement encouraged anti-Trump supporters to boycott any products and services associated with the family name.

While Nordstrom chalked it all up to numbers, Twitter users are still questioning the reasoning behind their decision. While many are praising the store for dropping Ivanka, others are criticizing them for what they see as a political move.

@Nordstrom Terrible biz decision not to carry Ivanka's line. In the D.C. market this line is one of the best choices.

@Nordstrom If you remove Ivanka products I'll never again purchase from Nordstrom! Don't give in to the haters! INTOLERANCE IS SICK!

@Nordstrom Ivanka has a great line at affordable price. I am boycotting buying anything from Nordstrom- you are a bunch of 🤥

Might just order an @IvankaTrump handbag tonight and it WONT be from @Nordstrom !!! Love your stores but shame on you! Ivanka is amazing! 👜

PSA: @Nordstrom, as a business, got rid of a BRAND that was NOT selling! We, the people, made that happen with our wallets! #GrabYourWallet

.@Nordstrom Very bad idea dropping @IvankaTrump shoe line 👠 I loved shopping with you over the years but I will no longer. #BoycottNordstom

Hello @Nordstrom -I won't be shopping at your store anymore. #BoycottNordstrom until Ivanka Trump's Clothing line is back on the racks.

@Varneyco @Nordstrom @IvankaTrump
Yrs it is, we should boycott the store. Must support Ivanka and her family.

Nordstrom dropping Ivanka brand. Shameful conduct! So un-American. They are liberals so what can one say.

@IvankaTrump Ivanka you are a sweet and classy lady do not concern about nordstrom and other non-trump fans, we will support you always

@IvankaTrump Ivanka you are a sweet and classy lady do not concern about nordstrom and other non-trump fans, we will support you always

@4ReallyandTruly @Nordstrom @IvankaTrump Ivanka did nothing but support her father and support America. And they've just boycotted her.

I won't be shopping at Nordstrom's again. I hope they lose a lot of Trump supporters' business. Love Ivanka's clothing and shoe line. https://t.co/f0LtE6En4x

@Rockprincess818 @Nordstrom Why is Nordstrom bowing to bullying? Ivanka's line is beautiful & affordable! Shame on them😡

Not selling ivanka trump's clothing line because you don't like her father? 😂 okayyyy . No longer shopping at Nordstrom or Macy's.

Looks like Ivanka Trump brand disappeared from @Nordstrom @shannoncoulter yes girl! We did it!

Big news everyone. You did this. I am in awe. https://t.co/q9vwmyfpbn

It also seems that fellow luxury retailer Neiman Marcus joined in on releasing the Ivanka Trump label from their inventory. Shoppers noticed the label's jewelry line was missing form the store's website early Friday, after a quick search reveled the store does not have it listed under their main list of designers.