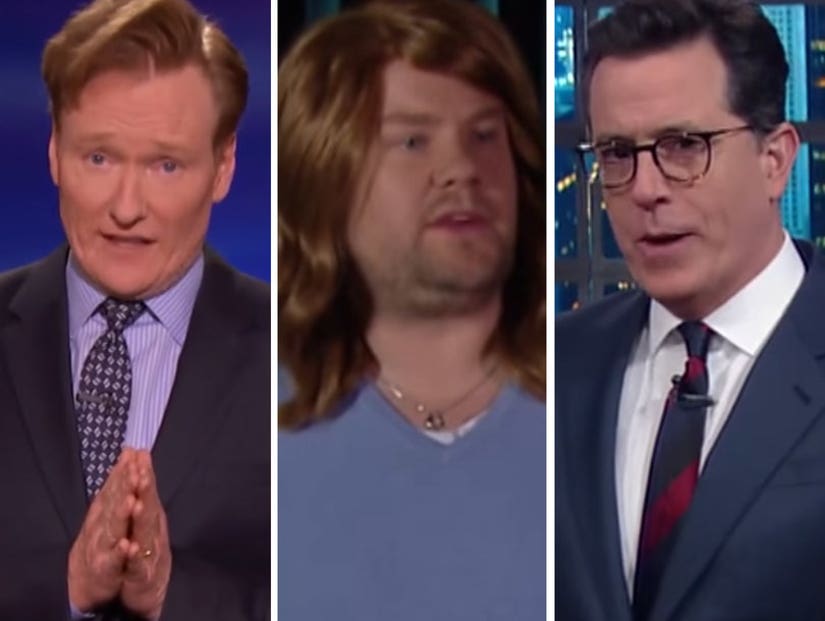 The biggest Oscar fail of all time is the gift that keeps on giving.

"La La Land" mistakenly being announced the winner of Best Picture was the talk of late night on Monday, as every host had something to say about what was one of the most cringeworthy TV moments ever.

James Corden spoofed Oscar winner Emma Stone's performance in "La La Land" on "The Late Late Show," dressing in drag as he recreated her audition from the film with some tweaked lyrics.

"My film used to be Best Picture, I remember it was Oscar night, Faye Dunaway said 'La La Land' won. I remember our whole team jumped on the stage, leapt without looking, gave speeches until the PricewaterhouseCooper guys came up and said ... 'Moonlight's the winner and we all lost our damn minds,'" he sang. "Was this a mix-up, a conspiracy, a fix-up or was Warren Beatty just blind? Here's to the ones who lose, god I need so much booze. Here's to the ones who hope, who switched that envelope? This result doesn't seem right, Oscars used to be white."

During his monologue he also joked that after "Moonlight" was named the actual winner, "I bet Hillary Clinton was like, 'yeah, welcome to my world.'"

During his monologue, he replayed the moment in question for the audience. "That is so uncomfortable to watch," he said. "It's like watching Titanic, except Titanic actually won Best Picture."

"It should have been a great moment for African American people, but there's always a catch," he continued. "Here's your Oscar, but some white folks get to touch it first. To make matters worse, while they were up on stage Ryan Gosling had to explain jazz to them."

Conan O'Brien tried to defend Warren Beatty over the snafu, saying the card he was given to read was "pretty confusing."

"Moonlight is not the film that didn't win best picture," read an edited version of the card in question.

Fallon was quick with his remarks on the incident. After praising Jimmy Kimmel's hosting abilities, he joked, "['La La Land'] joined a support group with the Atlanta Falcons and Hillary Clinton."

"Several producers from La La Land had given their acceptance speeches before the mistake was realized," he continued. "That's pretty rough, now you gotta apologize for everyone you forgot to thank in your speech that didn't count."

Seth was shortest with his take on the subject, calling the mistake "yet another defeat for perennial loser Ryan Gosling."

He added, "'Moonlight' won Best Picture last night, while the award for most pictures went to Gary from Chicago."

Watch Kimmel's take on what happened below: