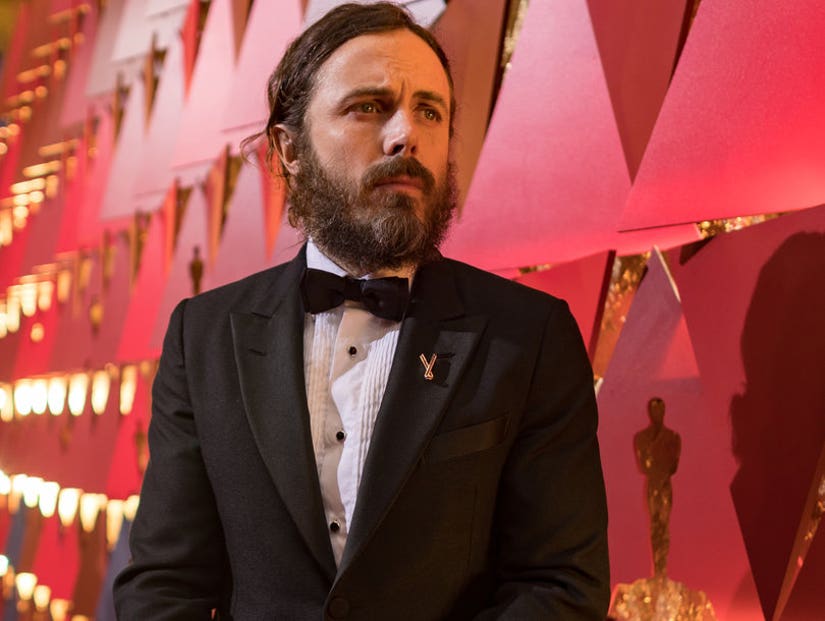 Casey Affleck's first Oscar win was immediately haunted by his past on Sunday, and the "Manchester by the Sea" star reportedly "sighed heavily" when asked about the backlash over sexual harassment allegations in his first interview since taking home the trophy.

"Asked about those sentiments Tuesday, Affleck paused and sighed heavily," Boston Globe reporter Mark Shanahan wrote. "He said both sides in the case are prohibited from commenting on the matter, and none of the people who are condemning him online know what happened."

But here's what the Best Actor in a Leading Role winner could say: "I believe that any kind of mistreatment of anyone for any reason is unacceptable and abhorrent, and everyone deserves to be treated with respect in the workplace and anywhere else."

He added, "There's really nothing I can do about it. Other than live my life the way I know I live it and to speak to what my own values are and how I try to live by them all the time."

Affleck beat out fellow nominees Andrew Garfield ("Hacksaw Ridge"), Denzel Washington ("Fences"), Ryan Gosling ("La La Land") and Viggo Mortensen ("Captain Fantastic"). While Affleck's victory wasn't a surprise, since he won a number of Hollywood awards season accolades leading up to the Academy Awards, but not everyone was celebrating.

In fact, Brie Larson - last year's Best Actress Oscar winner for playing a rape victim in "Room" - did not clap for the actor.

"Office" writer and star B.J. Novak contributed to the widespread backlash from viewers on Twitter. "Can we check Best Actor again?" he tweeted. Before that, "Fresh Off the Boat" star Constance Wu slammed Affleck when he the Oscar nominations were announced in January.

Here's a thing I wrote during an convo w/ @PeterShinkoda about how Casey Affleck's win will be a nod to Trump's. pic.twitter.com/FjrRsniS9d

Affleck's win is bogged down by sexual harassment allegations from two different women, a producer and a cinematographer, who filed lawsuits against him in 2010 for his behavior while making "I'm Still Here," the faux documentary he directed. According to one of the plaintiffs, Affleck offered his bed while the crew was lodged in his New York City apartment, and the woman woke up in the middle of the night to discover Affleck had joined her at some point.

"Plaintiff was shocked and repulsed because she did not know where he had touched her while she was sleeping. ... [Górka] immediately jumped up and told Affleck to get out of her bed," the complaint reads, according to Mashable. "Affleck responded by asking 'Why?' Plaintiff said 'Because you are married and because you are my boss.' Affleck, undeterred, asked if Plaintiff 'was sure.' Plaintiff said she was sure and insisted that he leave the room. Affleck left and slammed the door in anger."

Both lawsuits against Affleck were settled out of court.