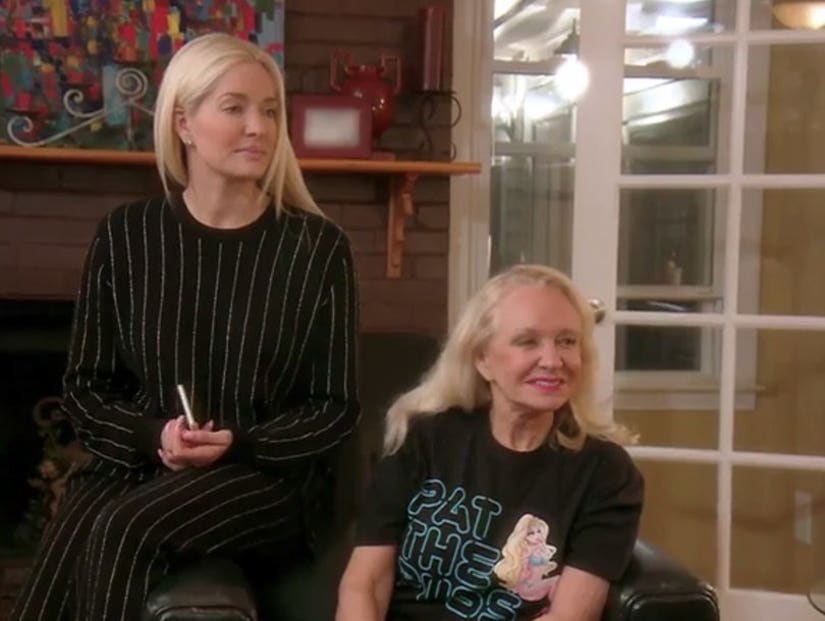 Last week, Lisa Rinna had her “come to Jesus” moment over cheesecakes with Carnie Wilson and the gals.

She finally copped to saying those vile comments about Kim Richards i.e. she's "close to death" and her sister Kyle Richards was an "enabler." The two mortal frenemies then finally did the whole proverbial kiss, make-up and let bygones be bygones thing with the help of Kim's sponsor, who attended the ladies' night for moral support.

All the ladies sniped at one another as they recounted the last two weeks of the Eden-Rinna "she said-she said or didn't say or couldn't remember saying?" drama... Lisa Vanderpump was asked to "pick a lane" by Kyle as she piled on Rinna and basked in the utter joy of comeuppance. ("Own it... Own it... Own it"). Minutes later -- Mama Carnie who soothed the souls with some sharp words of wisdom conjured up a big kumbaya moment around the dessert tray.

This week, the calm followed the storm, but not for long.

“Kim has been through a lot,” Kyle said, “but I do feel like Kim and Lisa Rinna were able to work things out for now, and if Kim's ok with Rinna, I'm ok with Rinna.”

“I had gone to the doctor, and then…there were these shoes at Saks.” Rinna said laughing hysterically. “The doctor's right next to Saks, I mean…”

…except it wasn't the first compliment she's ever given her. cue footage

She then invited the “whole bloody gang” on Vanderpump's Hong Kong trip to rescue dogs bound for the Yulin Dog Meat Festival.

“My mother grew up playing the piano and became a piano teacher,” she said. “My favorite childhood memory is waking up on a Saturday morning to this glorious music. My mother's really good. I was a terrible student, which is why I don't play, 'cause we would fight at the keyboard, so I became a singer-dancer.”

“My relationship with my mother at this point of my life is probably the best it's ever been. My mother was 18 when I was born, and she was raising me in the best way that she knew possible. She always told me she loved me, always gave me hugs, but she never bullshitted me.”

“I thought you were a real bitch last year,” Vanderpump said to Rinna.

“And I thought you were, too,” Rinna responded.

Looks like a little honesty can go a long way.“The Real Housewives of Beverly Hills” airs Tuesday nights on Bravo.