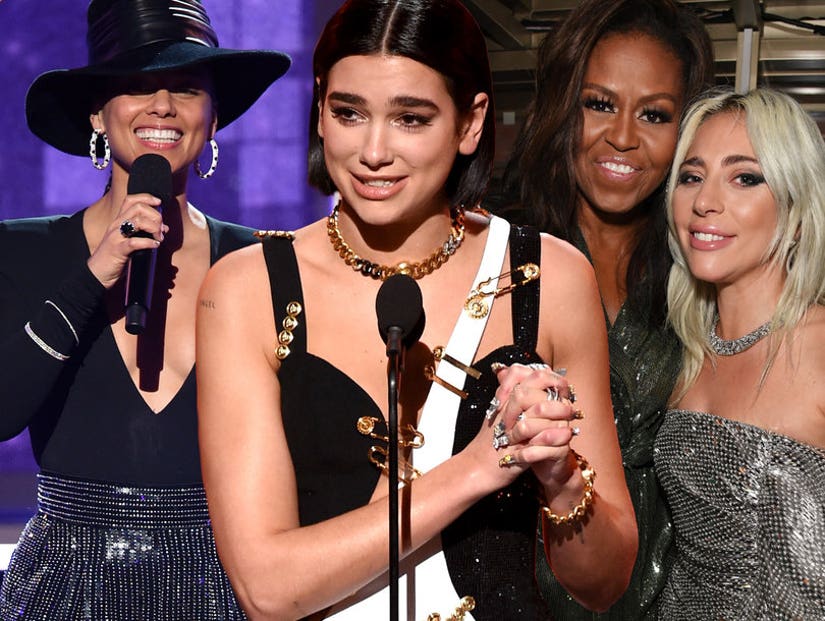 A year ago Recording Academy president Neil Portnow dared women to step up at the Grammys. They did.

They were told to step up — and they summarily crushed it.

Every Grammys ceremony has its highs and lows; but nothing will ever stoop below Recording Academy president Neil Portnow telling women it was essentially their fault last year's awards were dominated by men.

This year the ladies answered in force, almost sweeping the trophies and outnumbering the men two to one among the night's performers.

Of the 35 people who took to the stage to perform (including Miley Cyrus and Kacey Musgraves twice) 23 were women while only 12 were men — and that's counting the three who fell in line behind Camila Cabello, and the Red Hot Chili Peppers as four. 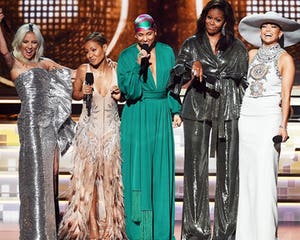 On top of that, the ceremony boasted an excellent host in Alicia Keys, who stamped girl power on the top of the evening when she led out the A-team of powerful girls in Michelle Obama, Lady Gaga, Jada Pinkett-Smith and Jennifer Lopez.

It was a resonating answer to Recording Academy president Neil Portnow's now infamous comments about the male dominated 2018 line-up in which just one female — Alessia Cara — took home a solo Grammy, for Best New Artist.

"It has to begin with… women who have the creativity in their hearts and souls, who want to be musicians, who want to be engineers, producers, and want to be part of the industry on the executive level… [They need] to step up because I think they would be welcome," Portnow told Variety at the time.

"I don't have personal experience of those kinds of brick walls that you face but I think it's upon us — us as an industry — to make the welcome mat very obvious, breeding opportunities for all people who want to be creative and paying it forward and creating that next generation of artists." 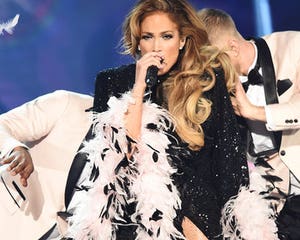 Dua Lipa — who ironically took home Best New Artist this year — threw a little shade at the president when being interviewed on the red carpet by Ryan Seacrest, who asked her what she thought of the female dominated line-up ahead of the show.

"Well it says that we're really stepping up," she said with a wry smile, "and I hope you'll get to see a little more of that."

She had another go while accepting her award — and was summarily cut off.

"I want to begin by saying how honored I am to be nominated alongside so many incredible female artists this year," she said, adding "I guess this year we really stepped up."

She got exactly 55 seconds before the music played her off, in a show that lasted more than four hours. (Cardi B, in comparison, got 2 minutes and 15 seconds for her speech). 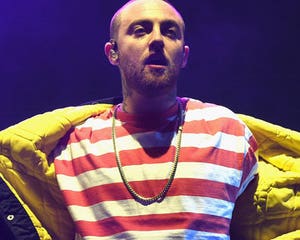 Drake was another who felt the wrath of the Grammys editing team when he dared proclaim the award he'd just won for Best Rap Song as superfluous.

"You've already won if you have people who are singing your songs word for word, if you are a hero in your hometown," he said, after surprising everyone by appearing in person to pick up his gramophone. "If there's people who have regular jobs who are coming out in the rain, in the snow, spending their hard-earned money to buy tickets to come to your shows, you don't need this right here, I promise you, you already won.

"But..." is as far as he got into his next sentence when the broadcast quickly cut to commercials.

However a Grammy rep later claimed they thought he was finished, claiming the rapper even told them so afterwards.

"During Drake's speech, there was a natural pause and at that moment the producers did assume that he was done and then cut to commercial," a rep told Variety.

"However the producers did speak with Drake following his speech and did offer him to come back on stage to finish whatever his thoughts were. But Drake said he was happy with what he said and didn't have anything to add."