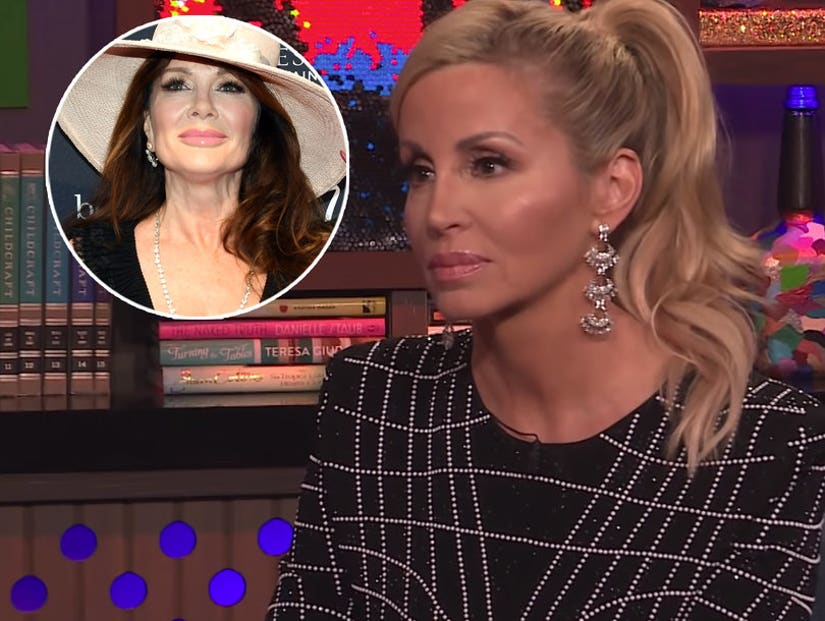 The relationship between Camille Grammer and Lisa Vanderpump gets more complicated every time the former opens her mouth.

Appearing on "Watch What Happens Live" on Tuesday night, the "Real Housewives of Beverly Hills" star straddled the line when it comes to supporting LVP, giving her props for some things and throwing a few barbs her way at the same time. 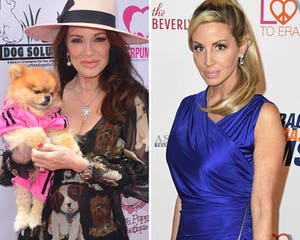 Of the lie detector test Vanderpump took on Tuesday night's episode -- a stunt she pulled in an attempt to prove she had nothing to do with Puppygate -- Grammer said she believed the results.

"I believe she didn't give the story to Radar," said Camille. When asked by Andy Cohen if she thought someone on her team may have leaked the negative story about Dorit Kemsley, she added, "I don't know, but I don't believe it was her."

That being said, the timing of the test left much to be desired for Grammer, as it went down the same weekend as her wedding. LVP previously told her she didn't want to attend the nuptials in Hawaii because of her ongoing feud with the other women in the cast, wanting to avoid making a scene during what should be a day all about Camille.

"She did say that 'I'm afraid that if I go, the focus is going to be off your wedding' and I did understand that," Grammer said last night. "But, after time, when I found out she was taking a lie detector test instead of coming to my wedding, I got upset. I was like why? You chose a lie detector test over me, your friend."

A reoccurring theme this season on "RHOBH" has been Vanderpump's alleged history of encouraging her costars off camera into bringing up dirt about each other during filming. This year, Teddi Mellencamp alleged LVP wanted her to bring up the Dorit dog situation, which Lisa has continued to deny. In the past, Brandi Glanville also accused Vanderpump of the same thing, while Camille said it was Lisa who talked her into exposing Taylor Armstrong's abusive marriage.

This season, previously-unseen footage from years ago showed Camille confronting Lisa about setting her up, which Cohen asked about last night.

"She was concerned for Taylor's well being and I think she wanted to bring it up and talk about it. She wanted me to bring it up," Grammer claimed. "She clammed up and backed out of it, so you feel like you're putting yourself out there and you're on the island by yourself. It was out of concern for Taylor, that is true, she was very concerned for Taylor. But I wanted her to join in on the conversation, not just leave me out there by myself."

All that said, during her late-night appearance, Grammer did express regret over one thing involving Lisa: accusing her of having fake teeth.

"I think it's funny. I regret what I said about Lisa's teeth, but I was under the influence and it came across really mean and harsh and I felt like shit after I said it and I apologized and I keep apologizing," she said. Then, referring to a TooFab article where we characterized their relationship had been "touch and go," Grammer added, "I think I read something recently, she's like it's been 'touch and go' and I'm like, oh lord, I've only apologized like 20 times, I guess there's a few more apologies on the way."

One last thing: she also talked about her TMI reveal a couple episodes back that she's massaged an ex's prostate during sex. While viewers went wild over the revelation, not everyone was thrilled.

"By the way, my dad was like, why did you have to say that?" she said with a laugh. "My poor father was beside himself. 'Camille really, prostate massages?' We cleaned every part of our bodies."