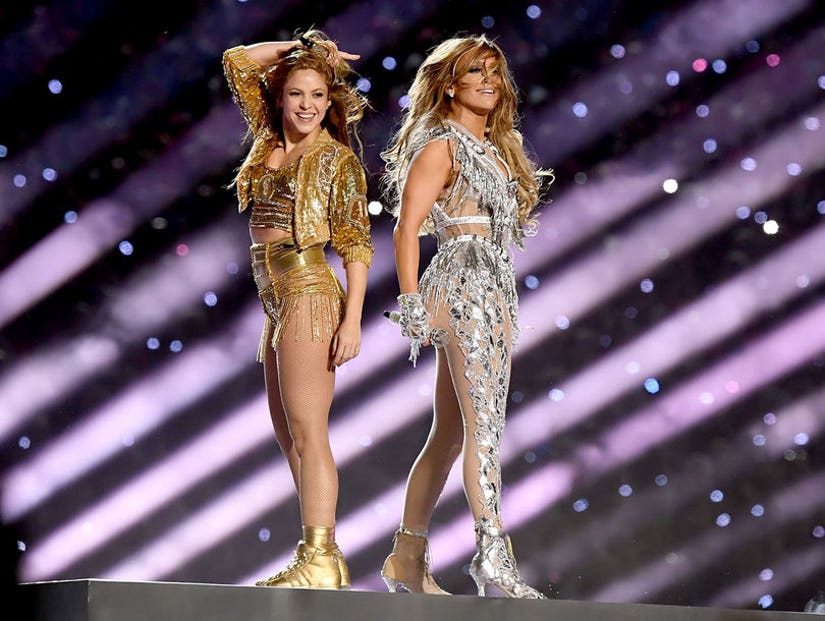 "Such powerful sexy women!!!! On camera and off!!!!!" exclaimed Lady Gaga.

While millions of viewers tuned into the Super Bowl to watch the San Francisco 49ers face off against the Kansas City Chiefs, one thing that's sure to have people talking all week is Jennifer Lopez and Shakira's halftime performance.

The pair hit the stage on Sunday at the Hard Rock Stadium in Miami Gardens, Florida, with a dual performance celebrating women and the Latino community, as this is the first time two Latina women -- J.Lo is Puerto Rican, Shakira is Colombian -- have headlined the 12-minute show. It was also the first halftime show produced by Jay-Z and Roc Nation. 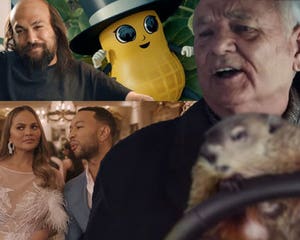 Rocking a short sparkly red mini from Dundas, Shakira kicked off the performance with "She Wolf," flanked by an army of dancers, before she picked up a guitar and rocked out to "Empire." The singer then tied herself up with a giant rope before launching into "Whenever, Wherever", before Bad Bunny joined her on stage to do a little "I Like It" and "Chantaje."

It was then time for her to really shake her body to "Hips Don't Lie," as fireworks went off to the beat.

J.Lo -- rocking Versace -- then entered on a pole, ripped off her dress and roared into "Jenny from the Block," before she was surrounded by male backup dancers with canes and leather skirts who joined her for "Get Right." She then got back up on the pole and pulled off some very impressive "Hustlers" moves as the green lasers turned on to launch her into "Waiting for Tonight." J Balvin also popped out briefly for "Mi Gente."

That was followed by dance breaks to "Booty" and "Love Don't Cost a Thing," before she got back on the mic for "On the Floor." Her daughter Emme then began singing "Let's Get Loud" as a troupe of young female dancers -- who began in cages, a nod to the border crisis -- joined them on stage, with Shakira on the drums. The two women then danced together, "Waka Waka" played, J.Lo donned a cape with both the Puerto Rican and American flags to "Born In the U.S.A." and hugged after bringing it home.

"Thank you to my incredible team for the most epic halftime I could have ever imagined," Lopez tweeted after the show, along with photos of her favorite moments. "I love you guys so much #SBLIV #SuperBowlLIV #PepsiHalftime"

Thank you to my incredible team for the most epic halftime I could have ever imagined. I love you guys so much #SBLIV #SuperBowlLIV #PepsiHalftime pic.twitter.com/sRCDxaWhRp

"Thank you @jlo for a night that shows how much Latinos have to offer," added Shakira, who also thanked her fans. "The best birthday gift has been the support of all my fans and the most amazing and hardworking team an artist could wish for. We Latinos climbed Kilimanjaro and made history tonight and we couldn't have done it without all of you!"

Dee Snider of Twisted Sister was one of the few who openly criticized the performance, after previously expressing frustration that rock acts aren't asked to do the halftime show.

"I'll let the reviews of this halftime show speak for themselves. @NFL," he tweeted. Retweeting a response reading "It wasn't the worst half time show!" he added, "High praise indeed! 'It wasn't the worst meal I ever ate!'" He later added, Beginning to pole humping, ass slapping, ass shaking end. If that's the requirements for a half-time show, none of the rock bands I know can or will do that. #justsayin"

Beginning to pole humping, ass slapping, ass shaking end.
If that's the requirements for a half-time show, none of the rock bands I know can or will do that. #justsayin https://t.co/Cyv2zl1Dua

Almost everybody else, however, praised their show, including Lopez's other half, Alex Rodriguez, and her ex-husband/Emme's father, Marc Anthony:

AMAZING!! She ABSOLUTELY CRUSHED IT! Wow, that was so fun!

I'm so proud of you, Jen! ❤️ @JLo pic.twitter.com/bD07MLcKYx

Emme Daddy is so proud of you. You are my ❤ and I am forever yours. pic.twitter.com/GLhmZOneBv

Here's how Hollywood celebrated the two women after their performance:

. @JLo and @shakira and all the special guests were so incredible!!! What a fun halftime show I danced and smiled the whole time. Such powerful sexy women!!!! On camera and off!!!!! Love you beautiful sexy talented women 💕💋 #SuperBowlHalftimeShow #SuperBowl

My friend @JLo, along with @shakira put on one heck of a halftime show. Love you JLo! #SuperBowl #JLoSuperBowl

Damn!!! That halftime show.. incredible to see such powerful women coming together for such an incredible performance. @shakira u were so fierce!!! @JLo I have no words. We r not worthy! Incredible! #HalftimeShow #SuperBowl2020

All my girls DOMINATED at the #SuperBowl!!!!!! 🙌🙌👏👏👏 That's what happens when a powerful female force comes together!!!!!! @ddlovato @shakira @JLo 💕

ALRIGHT!!!!!! now THAT was a GLOBAL Super Bowl halftime performance!!!!!! STUNNING- WE LOOOOOOOOVED IT! CONGRATS @JLo, @shakira and the whole ensemble AND CREW !!!!!! -KU #SuperBowlLIV

How special to have this moment with your daughter? #SuperBowl

Shakira and J Lo both did incredible in their performances in my opinion! But can we talk about how both of these women do not age whatsoever! I am captivated by there dancing and their stage performances. Wow!! Congratulations #SuperBowl

I'm still tired from that halftime show. How they dance that much and still look that goddamn fine?! Also, I'm in love with bad bunny?

This bad ass woman is holding it down for all of us ladies!!! @JLo is Killin it! #SuperBowl2020

Lmaooo I accidentally recorded this in slow mo and this is me screaming in slow motion lol pic.twitter.com/nfozh1Hi8K

#Shakira and #JLoSuperBowl just fantastic! What a show of talent, strength, athleticism, and beauty!! Astonishing! I'm so happy for both of them and their fans, who have waited a long time to see them conquer the world.

Omg i danced with them all the way through. Omg fuck yaaaaaaa

If after watching this half-time show, you're against immigration and think Latinos are invaders......go to boring, rhythm-less hell. Really.

Hispanics are Americans and Make America Great.
Deal with it! 🔥 🇺🇸

JLO singing on stage with her daughter just made me start crying? SPECIAL MOM AND DAUGHTER MOMENTS AND MEMORIES ❤️❤️❤️

Omg as if @JLo wasn't enough her baby girl is singing 😍😍😍

Everyone say “thank you Shakira, thank you Jlo”

Haters be 30 yr olds WISHING they looked as good as @JLo at 50. I love it. It's her time. She works her ass off to get results like this. And it shows. Love these women. Don't be jealous. Get yo ass to a gym!!! Plus she freaks the old men out who think women have a shelf life. 😂 https://t.co/4SqhiPy5Ll

Always good vibes!! How much do we all love @jlo. She's such a talent and celebrates her children! I have no words! Love her https://t.co/5dbcBkVTKp

When Shakira came back out playin drums...I WAS THRU! 🏆 She was hittin that high hat like...Yeah, bitches I play drums too! 🥁 #SuperBowlLIV pic.twitter.com/wjRYMA6U4i 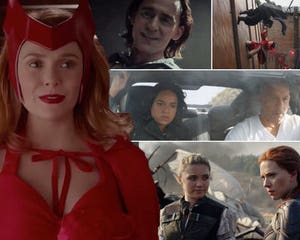