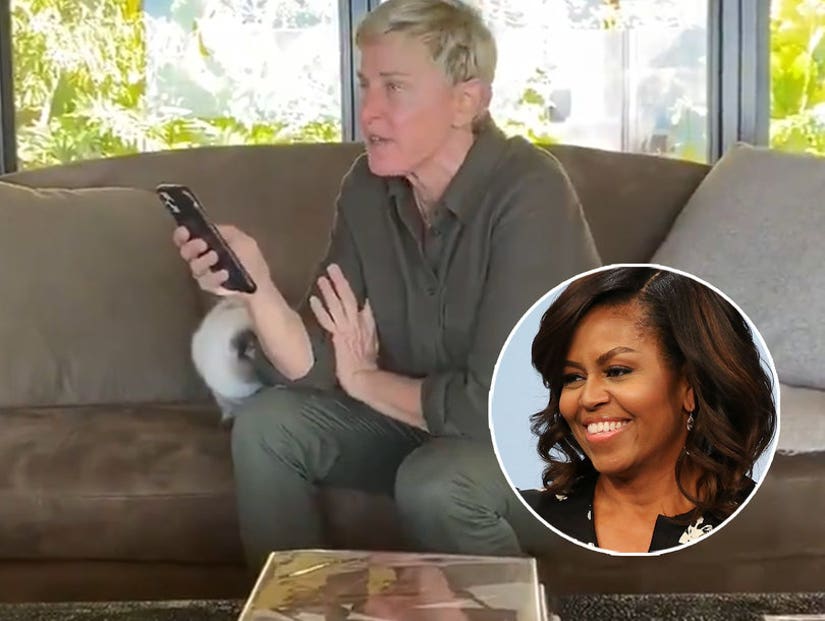 With Portia de Rossi working the camera, DeGeneres gets an update on the former first family.

Ellen DeGeneres continued to practice social distancing by calling her famous friends and recording their conversations for the world to see.

On Monday, she rung up Michelle Obama, who opened up about how her family is staying safe amid the growing coronavirus pandemic while also trying to find the positive in the situation.

My friend @MichelleObama makes the world a better place. pic.twitter.com/0Bq82SRqUH

Speaking with the talk show host, Obama said everybody in the family has been in lockdown together, with both Sasha and Malia home from college and doing all their schooling online.

"Barack, I don't know where he is," she added, saying both of them have been doing conference calls from home. "We're just trying to keep a routine going. We also got a little Netflix and chillin' happening."

"My condolences that the kids are home because you were saying how happy you are that they're gone," joked Ellen. "I shouldn't have boasted about that, the gods are getting me back," Obama replied.

As Michelle then asked what Ellen's wife, Portia de Rossi, was up to, Portia replied from behind the camera -- "I'm filming, this is my third career as a videographer." DeGeneres also explained that they were trying to get their entire family up to self-isolate with them in Santa Barbara, saying Portia's family and Ellen's mother were already staying with them. 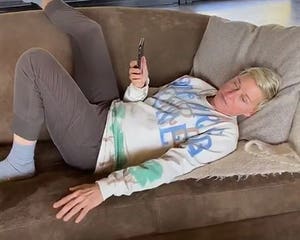 "It's a time for us to reflect on what's important, try to be creative," she added, with Obama agreeing emphatically.

"This is like no other time in history, particularly for our kids who are so used to being occupied and stimulated all the time," said the former first lady. "There's some good and bad that goes with it. I feel for all the folks who are going to suffer because of what's going to happen to the economy and we have to be mindful about what we're going to do to support those folks when this quarantine is over and people are looking at what's left of their businesses and lives and that is a negative."

"But on the positive side, I know for us, it's forced us to continue to sit down with each other, have real conversations, really ask questions and figure out how to keep ourselves occupied without just TV or computers," she continued. "It's a good exercise in reminding us that we just don't need a lot of the stuff that we have. When times are bad, having each other, having our health, we can do with a lot less and I think that's an important lesson I want my kids to understand. Be grateful for what you have and be ready to share it when the time comes, that's really what it's all about. Now we're just happy that we're together, that everybody is healthy and safe, who cares about the other stuff."

Revealing she has been passing the time by working out, Ellen then issued a challenge to the notoriously fit Obama. "I'm ready to challenge you to a plank pretty soon," she said, "I'm getting there."

"I'm gonna let you sit on that. You always seem pretty overly confident in your ability to best me in these physical matches," joked Obama in response, before giving Ellen some more time to prepare.

DeGeneres has been sharing phone calls on social media for the past week. See more of her conversations with celebrity friends below!

I talked to @MarioLopezViva and the whole Lopez crew. pic.twitter.com/w25s7KKXhK

.@CourteneyCox and Coco tried to put on a concert for me on FaceTime. pic.twitter.com/ROkK6e8pkG

I spoke to my friend @KevinHart4real, or as I now call him, Morgan Freeman's nephew. pic.twitter.com/6dh2eaUXM4

Good talk with @TiffanyHaddish and my new friend Jamie. I think that's what he said his name was. pic.twitter.com/VbiRUCrb6l

Sounds like things are good over at @JohnLegend and @ChrissyTeigen's house. pic.twitter.com/RRk0upv6BW

I called my friend @adamlevine for his birthday. pic.twitter.com/sIgEmAzBPy