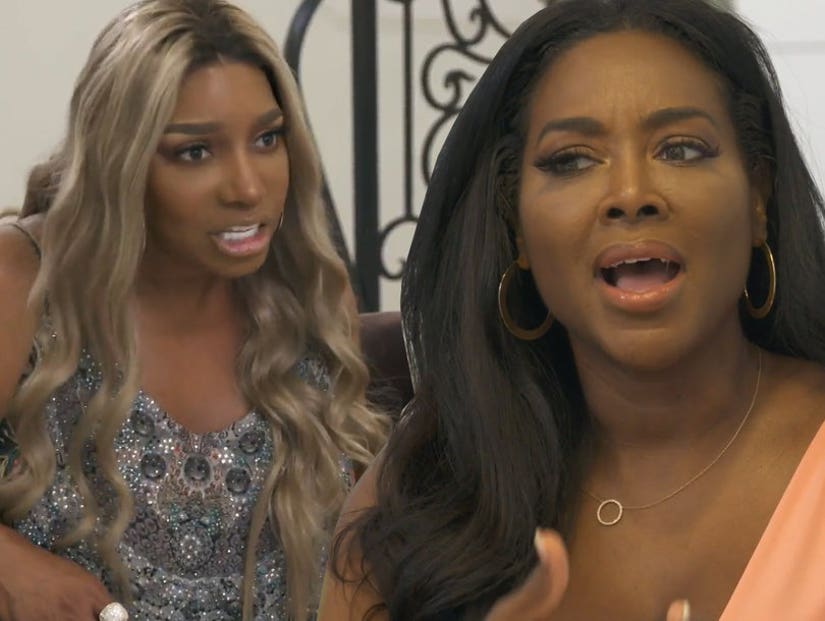 "Listen, I was just reading on my way over and Kenya and her estranged husband, he's had multiple affairs."

NeNe Leakes seemed more than happy to bring up cheating rumors about Kenya Moore's estranged husband Marc Daly on Sunday's "Real Housewives of Atlanta," after Moore had done the same for a number of women in the cast.

The new hour took place following the somewhat disastrous group trip to Greece, which Leakes recapped for her husband Gregg when she got home.

"Overall it was a great trip. Me and Porsha moved on. But one of our hosts, Ken, everybody heard she is possibly getting a divorce and we were gonna embrace her," NeNe explained. "She just completely ignores me and I don't dislike her like that, I keep being petty with the bitch because she's petty with me."

"I will say this, I had a couple drinks. But that doesn't have anything to do with what was going on," she continued, now referencing their big fight and her walk-off. "She tried to say, 'Well, you called my child a buffalo.' She knows I am not referring to her child. She knows I was referring to her because that very night that she's speaking of I said hi to her, she didn't speak, and I was like, 'F--k it. She must be having a f--king buffalo.' You know what I'm saying?"

Leakes also found it hypocritical that Moore has "talked about everyone's marriage ... talked about people's children" in the past, but says those topics are "off limits" for herself. "I don't f--k with her, that's that."

Later in the episode, Leakes showed up to a charity event ready to air some gossip about Kenya she had just read on an online blog. Speaking with Porsha Williams and Tanya Sam, she said, "Listen, I was just reading on my way over and Kenya and her estranged husband, he's had multiple affairs."

Porsha noticed Moore was wearing her wedding ring at the event, something that made her feel "hopeful," before Sam poked fun at the situation. Kenya previously confronted Tanya with the co-called "Cookie Lady" Sam's fiancé was accused of flirting with.

"Maybe it was the cookie lady and she was confused about where the origin of that story really came from," said Tanya.

"It's very ironic Kenya would bring the cookie lady to face off with Tanya and you got your own cheating mess to deal with," added NeNe in a confessional. "Tanya, go find the lady and sit her right in front of Kenya."

Porsha didn't believe the headlines, as NeNe added, "You never know." Outside of the show, Moore has denied Marc ever cheated on her -- though she did open up about confronting him over text messages to another woman earlier this season.

Kenya, meanwhile, was trying to stay positive following the split by focusing on her business and daughter Brooklyn. As she struggled to figure out how visitation would work, Moore said she didn't want Marc staying with her when he wanted to see their daughter.

"I could have been happy in my marriage if I felt like Marc was in it to be happy as well," she told one of her friends. "One of my issues with him is like, not being able to just have a conversation without yelling or anger or crossing lines. I'm like, I know it's not me and I know how hard I've fought for this marriage."

"I stopped caring about my feelings and all I was doing was trying to be everything he wanted me to be and work through everything as best I could to keep my family together," she continued. "It's always been this block up with him not letting me complete into his life. There's a lot of things I felt like I was in the dark about."

In a confessional, she claimed that "there's a large part of him or the relationship that I was just never privy to." She added, "For example, I'm not allowed to speak to his mother or father and if you don't know about that person's life, you're not being let in."