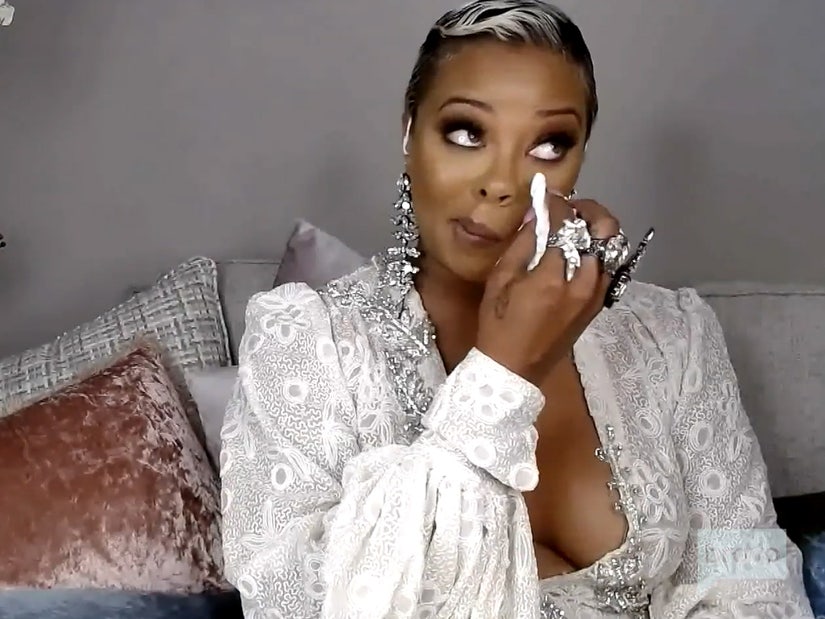 After resurfacing domestic abuse claims, an emotional Eva removes her mic and steps away from the camera.

Eva Marcille was overcome with emotion on Sunday's "Real Housewives of Atlanta" reunion, after the subject of her ex Kevin McCall took center stage.

The topic came up after Andy Cohen asked whether Eva's husband Michael Sterling had adopted daughter Marley, who Eva shares with McCall.

"I was sued by the donor asking for a reversal on the name change for child support and for custody and he came to Georgia and acted a fool in the court room, got arrested," Marcille answered.

McCall was seeking full custody of Marley, but got in a fight with a cop while in court and fell down an escalator with a sergeant during the scuffle. His bid was thrown out and she refers to him as her "donor."

"To keep it completely real, it was one of those situations where I was on that 'I'm doing me' thing and I met this guy, we hung out, we started having sex," she said of their time together. "But we weren't in a real serious relationship. Then I ended up finding out I was pregnant."

"I know a few of the ladies on this screen are victims of abuse, if its verbal or physical or mental but it was one of those things I definitely saw signs before," she continued. "I don't know why I was naive enough to think that it wouldn't be me. I told no one until he beat me so bad that I couldn't help it and the police officer, when they came to the house, said you have to press charges. I finally did after a year and a half and I can say five years later, my life is completely different, thank god."

Eva previously got a restraining order against McCall, and made claims on RHOA that she got the FBI involved and constantly moved houses to keep him from finding her. He has reportedly denied abuse allegations.

"It's not easy to talk about but even though you know it's not your fault, for some reason in there you still feel guilt," she said on the reunion, before trying to focus on the positive to come out of the situation.

"If I took it back, I wouldn't have [Marley]," she said, as she teared up, took off her mic pack and walked out of the frame.

Kenya Moore hopped off the virtual call to check in on Eva, who eventually returned with a fresh cocktail and continued with the reunion.