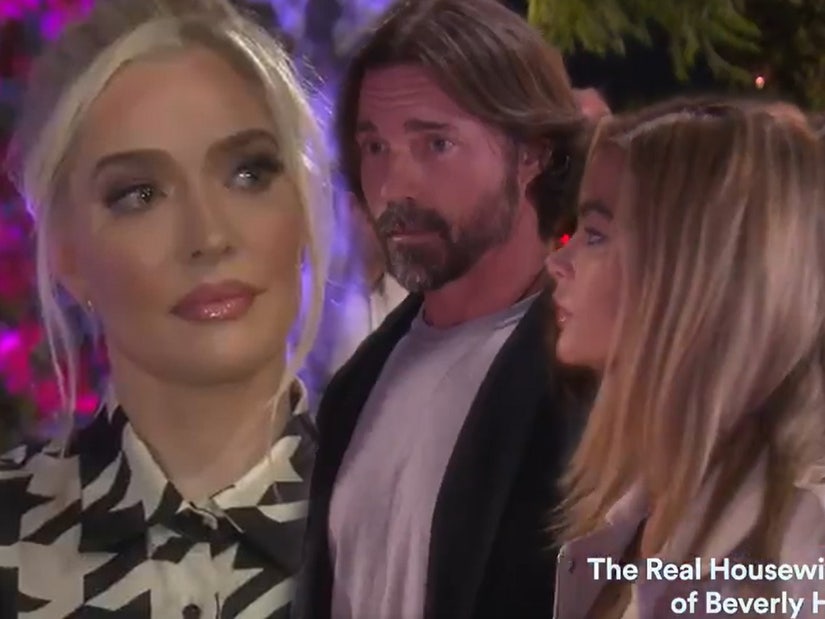 Denise and Aaron were back in the crossfires this week, as Erika took on Richards' husband head-on.

"Real Housewives of Beverly Hills" returned after a month-long break on Wednesday night -- where the drama between Denise Richards, her husband Aaron Phypers and the rest of the women raged on.

The episode kicked off immediately after the previous one ended, with the couple storming out of a party at Kyle Richards' house after the ladies called Denise a hypocrite for having an issue with them talking about threesomes within earshot of her children, but starring in NSFW movies like "Wild Things" herself.

As she fled the scene with Aaron, Lisa Rinna chased behind. Denise, however, was in no mood to talk to her on camera and said they could speak "privately" later. She also said her feelings were hurt Rinna didn't come to her defense, before Denise and Aaron took off to get steak and hit up a strip club.

Back inside, the rest of the women said Aaron -- who inserted himself into the drama the previous episode -- should have stayed out of the fight. Kyle assumed Denise had filled him in on the conversation in Santa Barbara -- where the hypocrite claims were first made -- and he came to this party ready to defend her. "He can f--k off," added Kyle.

The women also said they felt judged by Denise, as Kyle once again said she thought they were being "mom shamed." Dorit Kemsley didn't agree on that front, while Garcelle Beauvais seemed to be the only one who was fully on Denise's side.

The group -- minus Garcelle, who was moving, and Rinna, who was traveling -- all reunited later at a trunk party Sutton Stracke hosted at her store. Kyle, Teddi Mellencamp-Arroyave, Erika Jayne and Dorit were apprehensive to see Denise and Aaron, with Erika saying she didn't appreciate how he spoke to them at Kyle's.

Once the two showed up, it was awkward almost immediately. After saying hello, Denise made a run to the bathroom -- leaving Aaron alone with her costars. Yeah, that was a bad idea.

Kyle said she wanted to wait until Denise returned so they could clear the air, but Erika went for it. "Aaron, you let us have it, you told us we were bad people and that we should look in the mirror and are we happy with ourselves," she said to him.

As Aaron tried defending himself, Denise returned, walking straight into the hornet's nest. "I'm done with this conversation," he then said, "You wanna focus on negative, go ahead. You keep poking the bear."

Teddi then directly asked Richards why she called her "a shit f--king stirrer" at Kyle's, after Mellencamp pointed out at the gathering how Denise was swearing near Dorit's daughter.

"I didn't know Phoenix was there," said Denise, "This is the dumbest thing ever. Find something else to fight about."

She then grabbed her husband and they walked out, as he told her not to squish his hand -- a reverse of what happened when they stormed out of Kyle's. Dorit followed. Calling it a "toxic" situation, Denise said she didn't want to cause a scene at Sutton's event.

"It won't be dropped if you continue to leave," Dorit told them. "I understand your intention," she said to Aaron, "I understand my husband is so protective of me and it's not helpful."

Back at their table, Kyle said she didn't think Aaron was "a fan" of Erika's anymore. "I don't give a flying f--k," she replied, "Come see about me!"

"At this point, we can't be honest and talk to her so we have to pretend and not be honest," said Kyle. Added Erika: "Maybe we shouldn't have any conversations with her anymore."