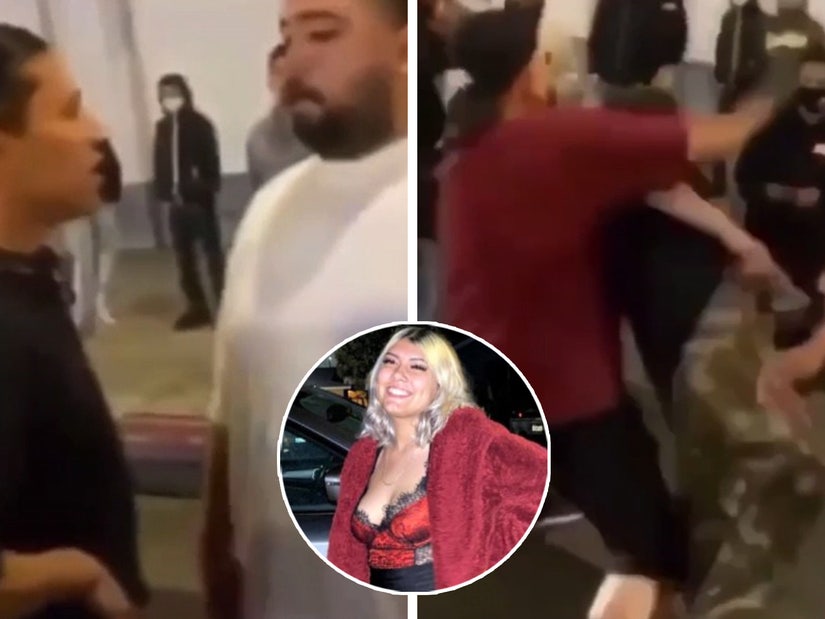 Estrada's lifeless body is seen face-down on the sidewalk, her friend desperately tugging at her and calling her name.

The horrific moment an innocent 17-year-old bystander was shot dead in Hollywood on Saturday night was captured on cellphone video.

Alejandra Estrada was standing on the corner of Hollywood Boulevard and Highland Avenue when a fight broke out in the middle of the road in front of her.

One of the men involved began firing into the crowd — fatally hitting the teenager.

According to CBS LA, around 200 people had gathered in the area to watch after it was taken over by a group of illegal street racers.

As the sickening video shows, the shooter is seen having an argument with another man in the middle of the crosswalk, as bystanders can be spotted watching the altercation in the background.

"You down to do some shit like that?" the suspect can be heard saying, as he pulls a gun from his waistband, but holds it down by his side.

Over some dumb sh*t from r/PublicFreakout

That's when a third man steps in out of nowhere and punches the man wielding the gun square in the face.

As he falls to the ground, the two men jump on him and a third can even be seen kicking him — but he is not unconscious.

The suspect jumps back to his feet appearing to fire three shots as the crowd around him scatters, hitting one man who can be seen limping away in the distance.

But when the witness pans the camera to the right, he discovers in horror that a second person has been hit, as Estrada's lifeless body is seen face-down on the sidewalk, her friend desperately tugging at her and calling her name.

They found him in Carson, 25 miles from the scene of the shooting, in possession of a firearm, where he was arrested for the Hollywood murder.

His bail was set at $3million. He is due in court on Wednesday.

The other man who was shot, 30, checked into hospital later that night with serious injuries, but is expected to survive.

A GoFundMe set up by a family member to raise money for Estrada's burial has already raised $24k.

"Ale was only 17 and was barley getting her life started. She was one of a kind and the life of the party," it reads. "She was at the wrong place at the wrong time and unfortunately it cost her her life."