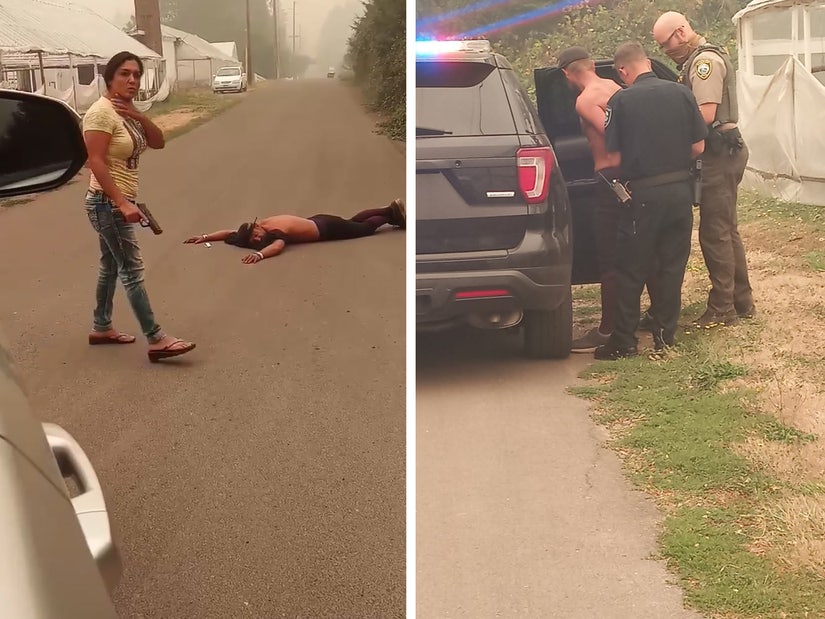 At least ten people have already been killed in wildfires across the state.

An Oregon woman believed she caught an arsonist on her property — and she wasn't letting him go.

Kat Cast posted a video on Facebook on Monday showing the moment she confronted the trespasser who was carrying a box of matches, before she held him at gunpoint.

"Get on the floor! Get on the floor and lie down, face down," she roars at the man after pulling up behind him in her car. "What are you doing on my property?"

"Passing through, I didn't know," the man replies, quickly obliging when he sees the handgun Cast is brandishing.

"Did you light anything on fire? What are you doing with those matches in your hand?"

But when she asks where his cigarettes are, he doesn't seem to have any. She tells him to stay where he is as the police are on their way. She also posted a picture of officers taking him into custody.

In the background the air is thick with smoke, likely from one of the many wildfires that have already devoured more than 4.7million acres of the West Coast. In terms of fatalities, Oregon is the hardest hit state, with at least ten killed and many more still missing.

"Had my husband been here he would have been dead," Cast wrote on Facebook, claiming the man had multiple warrants, one of them being assaulting a police officer.

In a follow-up post, Cast denied she had faked the whole thing, after being accused of doing so by some on social media.

"I will tell you something though if I need to do this again to protect my family and my neighbors, I will in a heartbeat do it again, except this time I will not be as nice as I was," she added.

Elsewhere in the state, Portland police arrested a 45-year-old man, Domingo Lopez Jr., on Sunday for allegedly starting a fire along the I-205 freeway with a Molotov cocktail; they said after he was released they had to re-arrest him 12 hours later for setting six more fires.