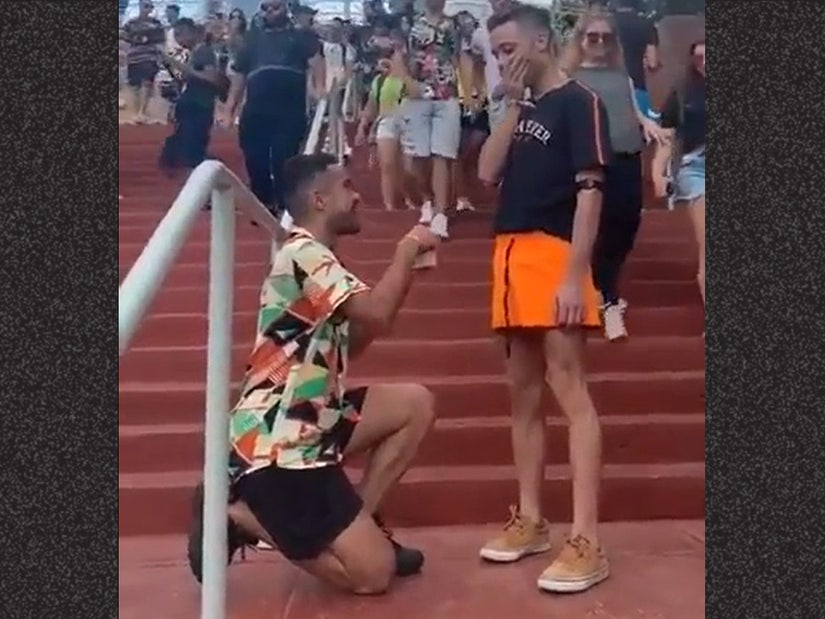 That is the sound of the internet's heart collectively melting.

A Brazilian man proposing to his boyfriend did not get the answer he was hoping for — he got something much better instead.

A heartwarming video shared on Reddit on Thursday showed the couple descending the stairs beneath the Ferris wheel at São Paulo's Hopi Hari park, and stopping at the famous photo spot for a kiss while a friend filmed.

But one of them has an ulterior motive for the photo op: suddenly dropping to one knee he pulls a ring from his pocket and pops the question, as the crowd around cheer in delight.

His partner looks stunned — but it's not just at the proposal of marriage.

Instead of delivering an answer he wordlessly walks away, prompting a concerned look from his partner, before reaching into his backpack... and pulling out an engagement ring of his own.

The crowd squeal in delight as the presumably now-engaged couple embrace on the steps.

The 45-second clip was met with an outpouring of joy and delight, as viewers tried to guess the significance of the time and place to their relationship.

"This is the embodiment of two people who are in the exact same place in their life and have their goals for the future aligned," one commenter wrote. "Kudos."

As many pointed out, the beautiful phenomenon known as the double-proposal more frequently occurs among same sex couples.

"The best thing about gay marriage is double proposals," another commenter chimed in. "Remember when everyone was panicking that gay marriage would ruin marriage? Yeah, turns out we just buy more rings."

While the phenomenon is undoubtedly rare, it is not unique: there is even a whole subreddit devoted to the double-proposal, including this one that happened at Memphis Zoo last year:

...and this one at Disneyland the year before:

TELL ME WHY WE JUST PROPOSED TO EACH OTHER AT THE SAME TIME AT OUR FAVORITE PLACE I’M SPEECHLESS pic.twitter.com/UaKcQlRTnP