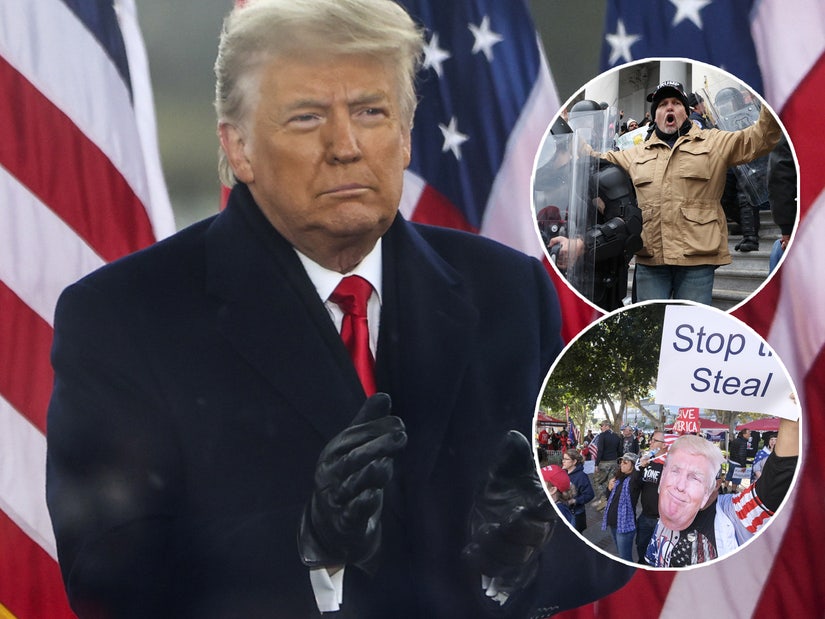 As Capitol Hill descends further into chaos while President Donald Trump's faithful show their support with civil unrest, Hollywood is making one thing very clear: They want him out, and fast.

While there's only 14 days until President-elect Joe Biden is sworn into office, many big names believe that's two weeks too many to have Trump in the White House. So far, there's been a lot of social media chatter about Vice President Mike Pence invoking the 25th amendment to get him out, or an impeachment and immediate removal from office.

On Wednesday afternoon, Congresswoman Ilhan Omar tweeted out that she was already drawing up Articles of Impeachment for Trump. She wrote, "Donald J. Trump should be impeached by the House of Representatives & removed from office by the United States Senate" and added, "We can't allow him to remain in office, it's a matter of preserving our Republic and we need to fulfill our oath."

Congresswoman Ayanna Pressley agreed, tweeting that Trump "should immediately be impeached by the House of Representatives & removed from office by the United States Senate as soon as Congress reconvenes. This is dangerous & unacceptable." Also on board was Congressman David Cicilline, who wrote, "This is outrageous, and the president caused it. We should impeach and convict him tomorrow." 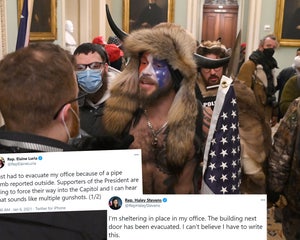 Congressman Ted Lieu, meanwhile, told Pence, "You need to start the 25th Amendment. @RealDonaldTrump is detached from reality." Agreeing with him was The  National Association of Manufacturers, who released a statement saying the VP should "seriously consider working with the Cabinet to invoke the 25th Amendment to preserve democracy."

The 25th Amendment gives the VP and a majority of the sitting cabinet members the power to legally remove the president from office if they believe he's "unable to discharge the powers and duties of his office."

While it remains to be seen whether any of this will actually happen, celebrities are trying to manifest either option into existence. See all the supporters below.

Ratify the electoral college and then impeach Trump up or down vote .
Have senate remove him

Over to you @VP. pic.twitter.com/hziPA4WBhc

Excuse me isn’t this enough for 25th amendment pic.twitter.com/YmMHaNp8pw

It is entirely irresponsible, reckless and dangerous to allow Donald Trump to remain President of the USA for one more day. He still has the nuclear code, and command of the US Armed Forces. He will stop at nothing. He himself must be stopped. The 25th Amendment must be invoked.

Impeach him @POTUS tonight using the #25thAmendment he is crazy! Jb

Domestic terrorism happening in DC and at the Capitol is unfortunately not surprising at all because... America. And because Trump and the entire GOP party have been inciting and stoking violence and now they are instigating an insurrection and a coup.

It is long past time to invoke the 25th Amendment and end a presidency that poses a clear and present danger to America.

25th amendment —duh...like three years ago. This was 4 years in the making. This President was allowed to break laws and norms and repeatedly disgrace the US constitution — all leading up to a moment like this—this is heartbreaking but absolutely expected.

Hello cabinet? 25th amendment? Fire @realDonaldTrump he is a traitorous grifter. Law and order president my ass! Lock him up!

If we do not hold these seditionists to account, this WILL happen again.
Full stop.
Arrest them, impeach them, and hold them all accountable. https://t.co/2jLXL5Fjry

THIS. Shut this Anti-American terrorist up, and remove from our White House NOW. https://t.co/8onbliuZCs

This @realDonaldTrump tweet has not aged well! He was real strong talking about #BlackLivesMatter protestors; but he isn’t taking an aggressive approach against the treasonous, domestic terrorist rioters that he radicalized! #25thAmendment pic.twitter.com/L5ypHZUrLW

A real Vice President and real Cabinet members would invoke the 25th Amendment, and Mike Pence would become acting President immediately to calm the unrest caused by the soon to be Ex-President.

not a "mob" -- not a "militia" -- these are white supremacist TERRORISTS. and trump just said "we love you." Everything in my body hurts. we must impeach immediately! https://t.co/WKnaP5CwJw