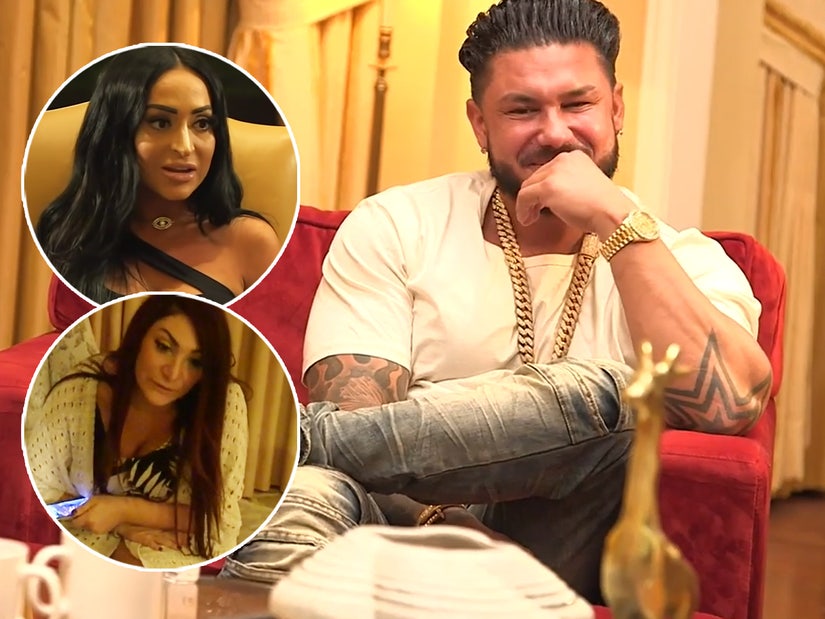 The guys are ready to do damage control for Angelina.

"Jersey Shore" is inching closer and closer to some kind of ceasefire between costars Angelina Pivarnick and Deena Nicole Cortese.

In this TooFab sneak peek at Thursday's new episode, the boys -- minus Mike "The Situation" Sorrentino -- regroup after a serious sit-down with Pivarnick, who has been at war with Deena, Jenni "JWoww" Farley and Nicole "Snooki" Polizzi in the aftermath of their disastrous wedding speech.

"I think tonight, we'll make some real headway," says Pauly D, clearly happy with how that conversation shook out. "We have a master plan in place here. What we're gonna do is make Deena feel good at dinner away from Angelina. We wanna keep her in that good mood, honestly. Keep it all positive."

Vinny Guadagnino joked that they'll all basically be acting as "Angelina's publicists" when they grab dinner with Deena later that night. "We're painting her out to be like she's awesome, she's changed," he added.

"Like my publicist?" cracked Ronnie Ortiz-Magro, who has been rehabbing his image following a nasty few years with ex Jen Harley.

Saying that their talk with Angelina "went way better than we could have imagined," Pauly added he has "high hopes of getting Deena to sit down and to make up with Angelina and move forward."

While you'll have to tune in and see whether the two were able to bury the hatchet, we do know there's at least some levity ahead for Angelina -- who was able to get a wedding "do-over" while the group filmed in lockdown for an upcoming episode.

"Let me tell you something, I almost peed my pants 10 times that night," Pivarnick told TooFab. "Honestly, that was one of the most fun days that night that I had with the roomies in so long."