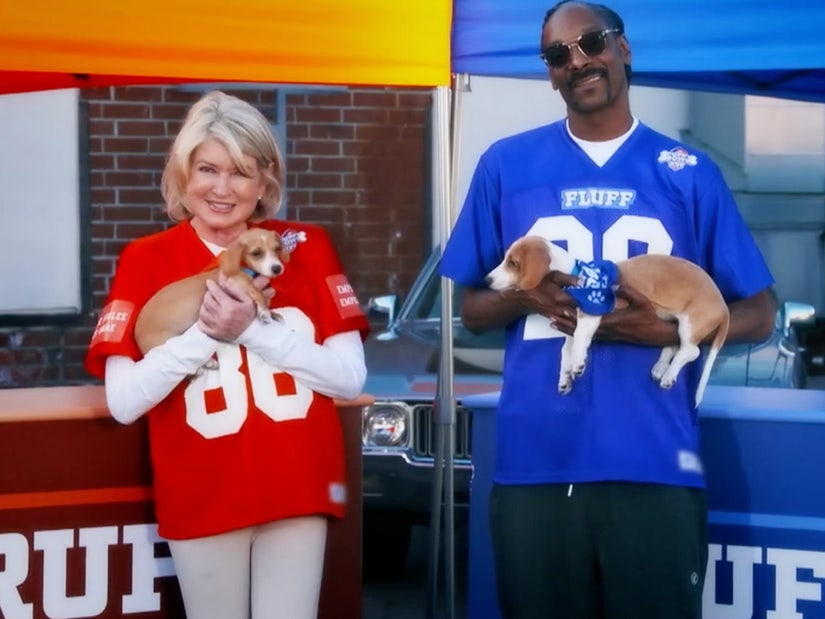 The iconic duo will have the canine companions give online shout outs to fans ahead of the Super Bowl.

Martha Stewart and Snoop Dogg are reuniting to host the 2021 Puppy Bowl ahead of the Super Bowl LV game.

Airing on Discovery+ and Animal Planet, the inimitable pair will be cheering on the adorable pups from rescue shelters Annenberg Pet Space, Paw Works, and SPCA LA.

The lifestyle guru will represent Team Ruff in orange with the rapper on Team Fluff in blue, as the canine extravaganza will include a legendary tailgate party filled with game day snacks and Puppy Bowl-themed cocktails.

Fans will have another special treat in store, as Martha is bringing along her French Bulldogs, Creme Brulee and Bete Noire, while Snoop's French Bulldogs, Juelz Broadus and Chalk, will be rooting for his team. It's been reported that Martha's Chow Chows Empress Qin and Emperor Han may also get in on the game day fun.

The duo's pets are set to give shout outs to fans online during the competition.

And the 70 puppies competing for the Lombarky trophy will be up for adoption during the 3-hour annual event.

Let the games begin!🏅
In a paw-some new special, amateur trainers face off to show who is the greatest showman. Find out who will be crowned Dog Games champion on Sunday February 6, exclusively on @discoveryplus. pic.twitter.com/sdNor6U1WF

"We'll see their skills play out in the brand-new GEICO Stadium, where these adoptable players have even more room to rumble and fumble!" a statement about the competition read.

"Additionally, for the first time ever on the sidelines, our Team Ruff and Team Fluff players will be cheered on by none other than adoptable puppy cheerleaders who will root and howl for their favorite players," it continued. "These cheerleading pups will turn up the volume with cuteness overload by shaking their pom-poms as the Puppy Bowl XVII players make their way down the field!"