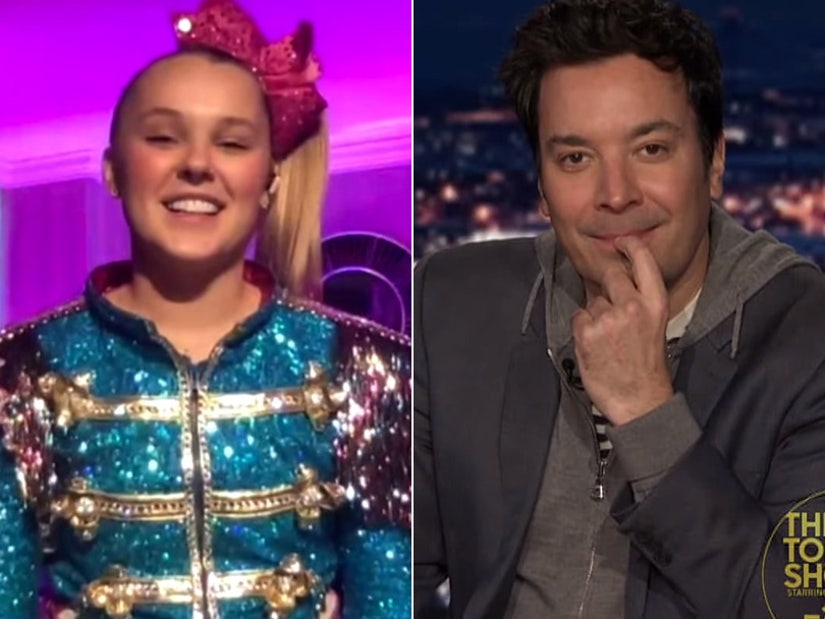 "If I lost everything that I've created because of being myself and because of loving who I want to love, I don't want it."

JoJo Siwa dropped a bombshell in her ongoing coming out saga during an appearance with Jimmy Fallon on "The Tonight Show" Wednesday night.

As it turns out, she had one huge supporter during her nearly week-long coming out reveal via Instagram where she sang along to Lady Gaga and wore a "Best Gay Cousin Ever" shirt, among other hints and clues.

JoJo says her girlfriend was the one who encouraged her to go ahead and own her truth. And now, JoJo is publicly owning the truth that she has a girlfriend.

Talking about a TikTok clip of her dancing to Paramore's "Ain't It Fun" with members of the Pride House, Jojo told Jimmy her thought was, "I think this TikTok is going to out me."

At the same time, she said she realized, "I don't really mind, it is true. I do have the most amazing, wonderful, perfect, most beautiful girlfriend in the whole world. It's not something I'm ashamed of, I just haven't shown the internet yet."

She said that as she slowly teased her official coming out -- which was absolutely intentional to kind of mess with her fans and have fun with it -- she and her girlfriend were taking note of all the positive reactions she was getting ... just for hinting she might be part of the LGBTQ+ community.

But she was also aware that it was "a really big risk" coming forward. And she has received some pushback from less tolerant people, which she's handled expertly by just dismissing them as they come in.

And she just can't let the inevitable haters of the world get her down. "Even if there's a million people that don't accept it, there's a hundred million that do," she said.

In a sweet reveal, JoJo shared that she was on the phone with her girlfriend and actually in tears just before coming out for her interview with Jimmy, but these were tears of joy.

"She's like, 'What's wrong with you?'" JoJo said. "I'm like, 'I'm just so happy because now I get to share what makes me the happiest with the world, and it makes my heart so happy.'"

You can check out the whole journey of JoJo's coming out story in the interview above.