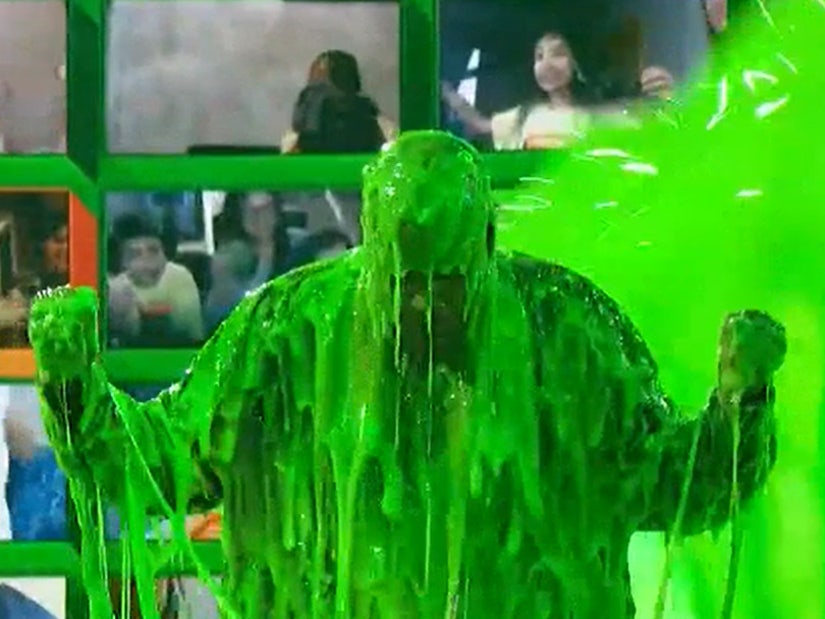 From almost drowning Kenan Thompson after record-setting sliming to VP Kamala Harris' empowering message, these are all the moments that had kids and adults alike talking.

It was another big night for celebrities and slime manufactures alike as the kids converged virtually for the 2021 "Nickelodeon Kids' Choice Awards."

This year's virtual even was hosted by "Saturday Night Live" and "Kenan" star Kenan Thompson (who got his big break on Nick's "All That") with some activities still happening from a traditional stage. An institution on "SNL" longer than many of the target audience members have been alive, he proved game for anything, including near death by (slime) drowning!

He wasn't the only one to take the plunge, so to speak, as there was copious amounts of slime saved for the likes of Robert Downey Jr., Lin-Manuel Miranda, Charli D'Amelio and Liza Koshy.

a #KCA blimp with a side of slime 💚 congrats @charlidamelio on winning fav female social star! pic.twitter.com/kqFgoBokIK

Confirming that even as the world has changed dramatically in the past year, some things may never change. Kids still absolutely adore Millie Bobby Brown and "Stranger Things," honoring both on the night, as well as Justin Bieber.

The latter joined the festivities with a new performance, though not with favorite female recording artist Ariana Grande, despite their collaboration "Stuck With U" winning for favorite ... well, collaboration. Instead, Bieber was joined by Quavo for "Intentions," and a medley of "Hold On" and "Anyone."

Fans were also treated to a reunion of the cast of "iCarly" -- minus Jenette McCurdy -- in anticipation of the show's upcoming revival, as well as a message of hope and inspiration from Vice President Kamala Harris.

we made #KCA history tonight with a @GWR title for the world's largest Slime-ultaneous Sliming! 🏆 pic.twitter.com/ZB2NVqgEE0

For as long as Nickelodeon has been letting kids make their choice of favorites, they've been doing so with copious amounts of slime (usually green) to honor their winners in more ways than one.

For Saturday night's broadcast, it looks like they'd been saving up all the slime they ever slimed on anyone throughout the years to dump it all on host Kenan Thompson.

Kenan actually asked for this, saying he actually agreed to preside over trying to set a "record" -- who's keeping track of this? -- for "most simultaneous online slimings."

After the walls of screens featured at-home fans sliming one another and a guy in a suit (so you know it's official) confirming they'd set the record, Kenan took one (or a thousand) for the team with an in-studio blast of epic proportions.

We suspect he may not have known exactly what he'd signed up for, because this was seriously a disturbing, dangerous and almost frightening amount of slime. "I'm the Creature of the Slime Lagoon!" he shouted in triumph as he was doused.

More than a decade into his career, and still only 27 years old, Justin Bieber remains as popular as ever with the younger set. This year's musical headliner, Bieber hit the stage for two (pre-taped) performances.

He had the virtual audiences screaming when he and Quavo joined forces for a performance of "Intentions," before coming back later for a powerful medley of his more somber recent hits "Hold On" and "Anyone."

To keep the mood light, though, he and Quavo earlier took advantage of the giant vat of green slime on the stage to celebrate their performance with a bath. We may never understand why these celebs choose this slimy life, but we can all be entertained when they do!

such an iConic @icarly moment at #KCA 🧡 who else was excited to see Miranda, Nathan, and Jerry back together? pic.twitter.com/nLm79xr3j4

Miranda Cosgrove reunited with "iCarly" co-stars Jerry Trainor and Nathan Kress to express just how excited they were for the Nickelodeon classic's upcoming revival series. While they were socially distanced on-stage, their larger-than-live TV personas nevertheless were on full display.

Especially Trainor, who couldn't have been more excited to be there had he been at an epic pizza party "paid for by someone else." No pizza for now, they trio instead handed out an award, but at least fans know that they're fully invested in their characters and ready to bring the fan-favorite series back without missing a beat.

such inspiring words from Millie Bobby Brown 💚 congrats on your #KCA wins! pic.twitter.com/rNkZgm4afD

Picking up her awards for Best TV and Movie Actress, the "Stranger Things" and "Enola Hughes" star continued to be a strong voice for women, representation, equality and all the things that are good in this world.

Taking advantage of her platform and speaking to the future of America, Brown told them about her career triumphs and struggles (at only 17 years old).

"I'm incredibly grateful for all the women over the world that continue to redefine and shape women in TV and movies," she said. "I have great inspiration.

She conclude her time by vowing that "we will continue to fight against stigmas and stereotypes and I am incredibly grateful to be part of that movement."

Kids everywhere are truly awe-inspiring 🤩 Y'all deserve this #KCA honor and thank you for the beautiful words @VP @KamalaHarris! pic.twitter.com/cS1fhYjfmv

While Vice President Kamala Harris is a Generation Changer herself as the first female vice president, she nevertheless bestowed Nickelodon's Game Changer Award to the kids themselves, as it is they who will ensure she's not the first and only, and that women and other under-represented groups continue to rise up, be respected, be seen, be heard and be given a seat at the table ... maybe even the head of it!

"From social distancing to remote learning, you've been through a lot this year," she told the kids. "But through it all, you, you young leaders, have really stepped up. You've worn your masks, you've helped out your neighbors, you've been role models in your community."

She then praised the upcoming generations for "creating a better future," telling them that they inspire both her and President Joe Biden every day.

"We are so grateful for you," she told them. "And we want you to know, we are doing everything we can to make sure all of our students and our young leaders can get back to school, and back with your friends, and be safe and thrive."

• Onward
• Phineas and Ferb the Movie: Candace Against the Universe
• The Croods: A New Age
• Trolls World Tour
• Scoob!
• Soul

Favorite Voice From an Animated Movie