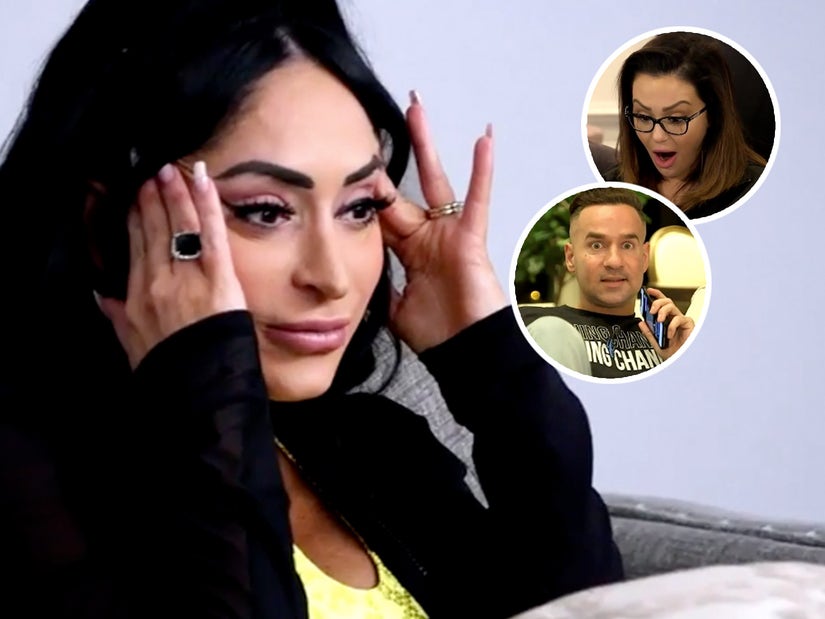 Angelina is accused of stepping out on Chris ... and making a chicken nugget mess outside her "side boo's" home.

The drama began when Mike "The Situation" Sorrentino's wife Lauren got a text from a family member whose hair dresser was complaining about Pivarnick while getting their hair washed. So, yes, we're talking secondhand gossip here.

The hairdresser believed Angelina was cheating on Chris with her neighbor -- saying Pivarnick was "gross, throwing her garbage and chicken nuggets everywhere outside." The woman also claimed to have footage of Angelina on her Ring security camera and was planning to sell it to the highest bidder.

Mike and Lauren didn't really know what to do with all this information, so he called up Jenni "JWoww" Farley and Deena Nicole Cortese, filled them in on everything and had them go talk to her about it. While Jenni was skeptical about the whole situation, she recalled how her own messy divorce from Roger Mathews was "unkind" and wanted Angelina to have all the information so she could "tell her side of the story before it gets spun into something else horrible."

Angelina, however, clearly didn't view it the same way, saying in a confessional that "It's always upsetting and frustrating that Jenni always has to try and say dirt on me, she's like all up in my biz. It's like, girl, what the f--- are you doing?"

Pivarnick said the claims were "not true," before asking to see the alleged footage. "I don't f---ing believe anything anyone's saying anymore. If people have security footage, where is it then?" she asked. She then focused in on the chicken nuggets of it all, something that really set her off.

"I haven't ate chicken in f---ing forever. I eat the two cheeseburger meal. I have not had f---ing chicken tenders in forever. Chicken fingers, what? No, no, no," she exclaimed. "Come on. When you get my f---ing food order wrong, the whole thing's wrong. This is ridiculous. People like to believe somebody else over me and it's kind of bulls---. Now it's like f---ing with my marriage. Get the video, I'm waiting for it. You guys gotta stop listening to everything you hear about me."

During a couples game night between Mike, Jenni and Deena, Jenni decided to contact the alleged "side-boo's" neighbor on the phone. The girl said she had videos of Angelina "screaming" at the guy she was with, claimed they hid from her and her boyfriend, recognized Pivarnick's car and promised to send one for confirmation.

Jenni was still skeptical, believing the girl was just an opportunist out for money. While at home with Zack, however, she got one of the videos texted to her.

"Maybe it's not her," she said while watching it. "No, that's her," said Zack, as viewers only heard someone in the video who sure sounded a lot like Angelina exclaim, "Hello!" The footage itself was blurred by editors.

"I wish these videos did not exist," said Jenni after watching, though she also clarified that the video did not include any "makeouts." She also believed Angelina would "flip" when she found out the alleged footage exists.

While we'll have to wait and see how Angelina reacts to the videos, the episode ended with her getting a call from Chris saying they need to "talk about a couple things." He added, "We gotta talk about marriage."

"I have a knot in my stomach, like wow, it's happening. He's coming home," she said, before the episode ended with her adding, "Lord help me, Jesus."