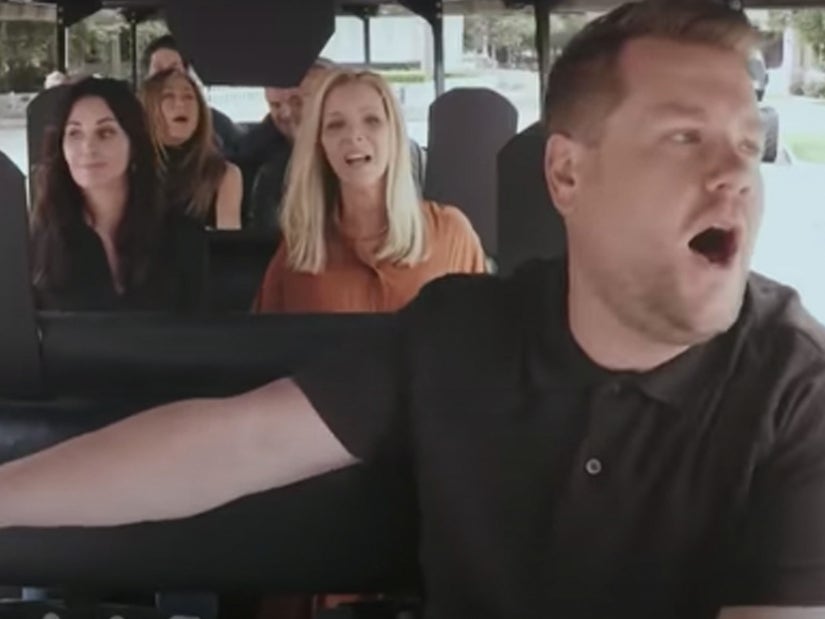 The cast talks about being back on those familiar sets, and Matt LeBlanc gives fans something else to look for in Jennifer Aniston's scenes.

Fans already tried to make a whole thing over Jennifer Aniston clearing her throat before delivering certain lines on "Friends," but now they've got something else to watch out for, thanks to Matt LeBlanc.

As with any production, there are always segments that don't make the final cut, winding up instead on the cutting room floor. Cut to James Corden's "The Late Late Show" on Wednesday night, and there are advantages to the "Friends" reunion host having his own show.

It's been a while since fans have been treated to an edition of his signature "Carpool Karaoke" segment, due to social distancing restrictions, so Corden filmed a special golf cart edition with the whole cast for the special.

While it didn't make it to air on HBO Max, Corden decided to share it with the show's fans on his show. So if you ever wanted to see all six of your favorite "Friends" from the '90s singing "I'll Be There for You," you just got your wish!

But it wasn't all song and games, though. After all, these aren't singers with deep back catalogs of music. Instead, the bulk of the segment featured Jennifer Aniston, Courteney Cox, Lisa Kudrow, Matt LeBlanc, Matthew Perry and David Schwimmer reminiscing about their time on the show as they got their first glimpse at some of the most memorable and iconic locales from the show.

But perhaps the most intriguing segment of the ... segment was when the cast was asked to identify which of them was the answer to a series of questions. Our favorite was when they were asked who was the worst at breaking into laughter.

After initially all pointing to Lisa, Matt backtracked and declared it a tie between Lisa and Jennifer. At first, Jennifer was taken aback, but when he pointed out that it's all those times she holds her hands up over her mouth that she's breaking.

"But I hid it," she said. And yet, so many of those moments did make it into the final cuts of the episodes. She was also quickly pointed out as (and owned up to being) the one who stole the most from wardrobe. "I still wear it," she trumpeted proudly.