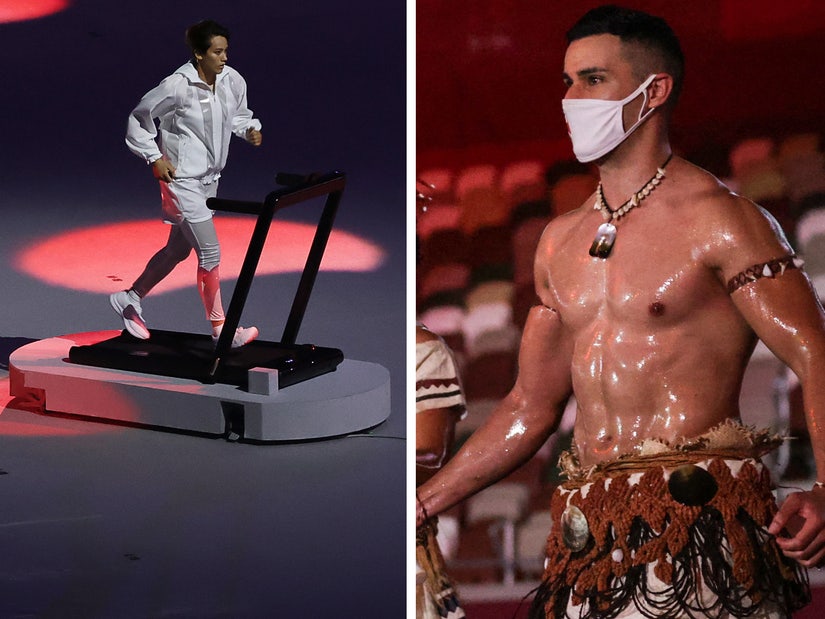 Although fans had to wait an extra year for the opening ceremony to kick off, the international stage didn't disappoint with more than enough viral moments going for gold.

After a year-long delay due to the coronavirus pandemic, the 2020 Tokyo Summer Olympics kicked off on Friday, July 23 in the capital city of Japan.

A scaled-down opening ceremony in the newly rebuilt Olympic Stadium was witnessed by less than 1000 spectators in a venue built for 68,000, as the threat of COVID-19 still looms over the world sporting event. But even as local support for the Games lagged, athletes were disqualified for testing positive for the virus and teams opted out of the parade of participants, the Olympics proved just as exciting and memorable as ever.

Keep reading for the all the best moments from the 2020 Summer Olympics opening ceremony that kept fans talking and tweeting, below.

A Japanese Boxer and Her Treadmill Steal the Show

Although Japanese boxer and front line nurse Arisa Tsubata lost her chance to compete in the Games due to the pandemic, she was able to capture the world's attention at the opening ceremony with her one-woman treadmill show. In a gesture signifying the social distancing challenges faced from COVID-19, Arisa spent almost five minutes alone running on the machine. And she instantly became the first viral moment of the Games, as Twitter exploded with their take on the solitary exercise showcase.

*turns on Olympic ceremony*
Fifteen minutes of a star Japanese boxer jogging on a treadmill in an empty stadium, her story of triumph against odds... then an announcement that she won't get to actually compete because her qualification tournament was cancelled due to Covid.

Treadmill running person going nowhere for a really long time at the Opening Ceremony is basically a perfect metaphor for 2020-21. #OpeningCeremony

Every time I've attempted to get on a treadmill since the pandemic started. #TokyoOlympics pic.twitter.com/cYycCA7rxl

If they asked me to run on a treadmill in front of the world I would simply hide forever. S/o to the performer

Pita Taufatofua returned in all his bare-chested glory, as he once again carried the Tongan flag for the opening ceremony. After causing fans to swoon at the 2016 Rio Summer Games and the 2018 Winter Olympics in Pyeongchang, Pita, who will be competing in Taekwondo, was joined this time by Malia Paseka, Tonga's first-ever female Taekwondo Olympian.

Let’s be honest, this is the only reason we all watch the #OpeningCeremony #Olympics #Tokyo2020 #Tonga pic.twitter.com/drZyKUh0KS

That’s a lot of lube pic.twitter.com/6of3jOsah2

The opening ceremony including a rendition of John Lennon's "Imagine" once again (the 1996, 2012 and 2018 Olympics all featured the ditty), causing one of this year's organizers to proclaim, "If the Games were a song, 'Imagine' would be the song," according to NBC's Savannah Guthrie. Tokyo's Suginami Junior Chorus started off the first verse, with international sensations Angélique Kidjo and Alejandro Sanz joining in. But it wasn't until John Legend and Keith Urban flashed onscreen that caused major flashbacks to Gal Gadot's ill-received version she debuted at the beginning of the pandemic.

Gal Gadot said Imagine, and the Olympics were like, okay

Did they consult Gal Gadot before recording the Opening Ceremony montage of Imagine? #Olympics

Don’t know how the Olympic organizers saw Gal Gadot and co singing Imagine and thought “yes. We need THAT” but here we are.

Imagine song doesn't hit like it used to after Gal Gadot thought she did something by singing it to remind us that we're all in this together during the pandemic, from her million dollar mansion while the rest of us were struggling. #Olympics #Olympics2021 #Tokyo2020 #Tokyo2021

After defending herself against Megyn Kelly's criticism over her Sports Illustrated cover, Naomi Osaka triumphantly lit the Olympic flame with her torch to symbolize the beginning of the Summer Games. The United States tennis star, playing in the Olympics for her home country of Japan, called the moment "the greatest athletic achievement and honor I will ever have in my life."

Undoubtedly the greatest athletic achievement and honor I will ever have in my life. I have no words to describe the feelings I have right now but I do know I am currently filled with gratefulness and thankfulness ❤️ love you guys thank you. pic.twitter.com/CacWQ5ToUD

Naomi Osaka, Japan's 23-year-old tennis star, was the final carrier of the Olympic flame. The Tokyo Olympics will be her first competition since dropped out of the French Open in May, citing intense anxiety caused by mandatory news conferences. https://t.co/JGhgJLSMpT pic.twitter.com/Y8MP0AESMT