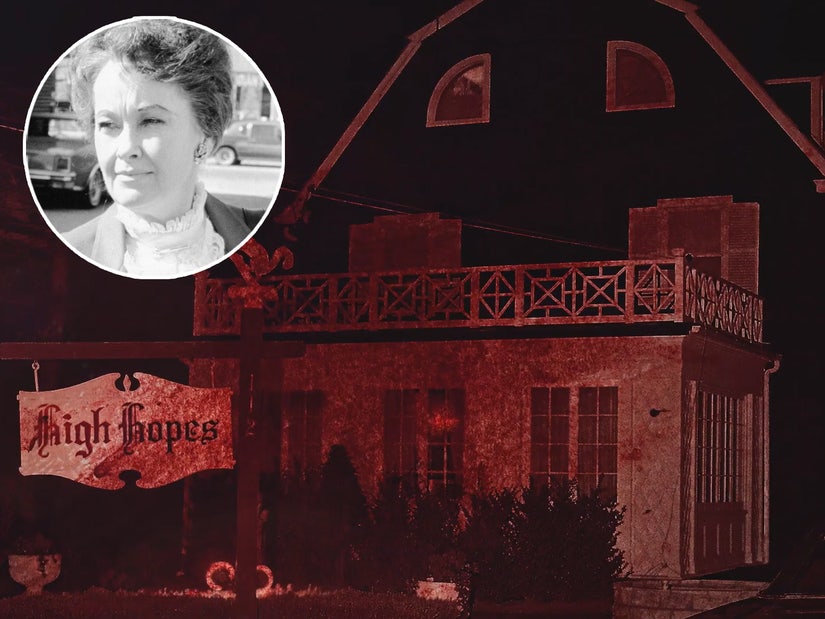 She also detailed a spooky incident with Annabelle -- and what it was like to witness The Conjuring seance!

The real-life horror story of the 1974 Amityville killings of the DeFeo family has captured the attention of true crime fans for decades -- and convicted murderer Ronnie DeFeo's death this year only drummed up renewed interest.

Debuting for the streaming service's month-long Halloween celebration "Terror on Tubi," the film searches for the truth behind DeFeo's "devil made me do it" defense, the hauntings that drove a family to abandon the Long Island house a year later and why paranormal experts Ed and Lorraine Warren were terrified of the investigation.

TooFab had a chance to chat with one of the documentary's stars, Laura Didio, who was an investigative reporter in the Amityville area back in the late '70s. She ended up cracking open the case by tracking down George and Kathy Lutz -- the couple who moved into and subsequently fled the house after the murders -- and teaming up with the Warrens to explore the allegedly haunted home.

When you interviewed the Lutz' in 1976, they told you about their experience with the hauntings in the Amityville house that made them abandon it after 28 days. But years later, George admitted parts of it were embellished. Did you ever feel like you were lied to by the Lutz family?

So as crazy as a lot of the stuff sounded, what was very convincing was that these two people, George and Kathy Lutz, seemed genuinely terrified. Now, if they were acting, they would have been right up there with like Robert DeNiro and Meryl Streep. They were giving Academy Award-winning performances.

What was the experience like when you went into the Amityville house with Ed and Lorraine Warren?

I recall Lorraine didn't know whose room was what, but she walked into Ronnie DeFeo's bedroom and I was behind her and she stopped right at the door sill. And she backed out and says, 'I can't go into this room. There's just too much evil and too much oppression here.' So she was obviously picking up on Ronnie's vibes. And I remember at a certain point on the stairs, the second floor landing, she also got a headache.

And two weeks later was when we went in and did the so-called psychic slumber party, as I dubbed it, and the séance. And it was one of those things that was actually kind of funny in hindsight. What happened was you had the film crew there, Ed and Lorraine Warren brought one of their research associates, a photographer, and a couple of psychics that they dealt with. George Lutz had called up some other paranormal investigators, invited them. So there were about 21 people in the house that night, and it actually took on a party atmosphere. So in terms of people expecting 'Poltergeist' or 'The Exorcist' -- you know, levitating dining room tables, beds, or a portal from the next dimension to open up --  that did not happen.

With that said, there were a couple of very interesting things that did happen that night -- which was our camera man. He got called in to do this at the last minute, so my point was, he didn't know a lot about this story or the house. And he went up the stairs with his light meter and he got halfway up the first flight of stairs and he turned around and he looked at me with an almost quizzical look on his face. And he says, 'There's a room on the second floor. It's the second bedroom, the second door on the right. And one wall is filled with mirrors.' And he says, 'And I don't know how I know that.' Again, that was the master bedroom where the Lutz's were and where obviously Louise and Ronald DeFeo Sr. were murdered.

And [the cameraman] continues up the stairs. And he turns around -- I was at the bottom of the stairs looking up at him and I see all the color drain out of his face. And he clutches his chest and doubles over, at which point, our sound guy and the lighting guy ran upstairs to him, get him back down to sit on the bottom step, get him some water -- cause he really didn't look good. I remember taking his pulse and you could see it was pretty rapid. He goes. 'I just had heart palpitations. I just felt this heaviness. I've never felt anything like this.' That was scary.

Did you feel any kind of haunting in the house?

No, I mean, I was just watching. It was almost like '10 Little Indians.' You see the cameraman go up the stairs and he has heart palpitations. This one feels a chill. That one feels a chill. The psychics are saying, 'Oh my God, I have an oppressive feeling.' Somebody runs out of the room screaming and gets sick. Another psychic says, 'It's upstairs in the second floor bedrooms. It's moving around.' Now I don't know what it is or it was, but all of these things were happening.

I remember saying to Lorraine -- I think it was just a couple of years before she passed away (in 2019) -- I said, 'Lorraine, of all the cases that you've done, what do you think was the scariest case that you've ever had?' And she said, 'Amityville.' And she always said - and maintained -- 'That was as close to hell as I ever want to get.'

She and Ed, when they were driving home from the house that one night, they said they felt something followed them and that their car almost went off the road.

Did you have other paranormal adventures with the Warrens?

Yeah. In fact I was in 'The Conjuring' house with them. I was there with Ed and Lorraine when they did the séance in that house. And I was sort of sitting in the background and the owner's wife during the séance was flung out of her chair across the room. It was like something picked her up and flung her. This was not, 'She leaned back and fell off the chair.' This was up and out of the chair. So that was scary.

Ed and Lorraine had a lot of spooky cases. They have that museum in their house. Annabelle the doll? Okay, before 'The Conjuring' movie, I went up to visit Ed and Lorraine one day in the summer, it was probably 1978, 79. And we're just going out to lunch and Annabelle wasn't in her case at the time. And the doll looks nothing like what you see depicted in the movies. Clearly it looks like a regular Raggedy Ann doll. And the doll was in one place in their family room.

We came back from lunch and the doll was on the other side of the room and its legs crossed and there was nobody else in the house. So that was kind of spooky. But they said, 'Don't touch the doll.' It's like, 'Ok, you don't have to tell me!' I'm not that brave!"