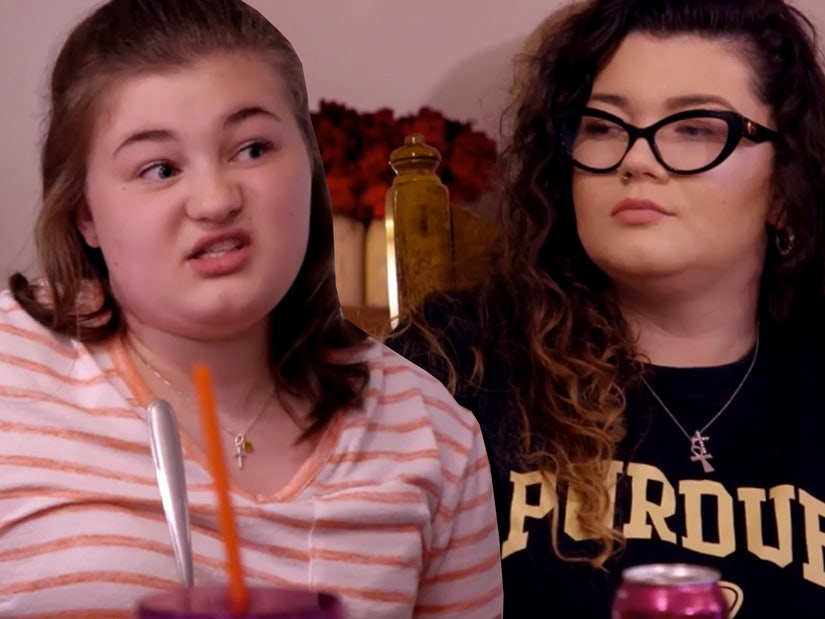 "A pissed off mini-Amber, I don't wanna deal with that."

Amber Portwood's dinner at Gary's on Tuesday's "Teen Mom OG" may not have been the mother-daughter reunion she was hoping for -- but all parties involved still left thinking it was a step in the right direction for their relationship.

After Portwood, her ex and his wife Kristina came to a truce the week before, Gary made good on his promise to make more of an effort to involve Amber in their daughter's life by inviting her over for dinner. Amber and Leah have been on the outs lately, with the 12-year-old feeling abandoned after Portwood's rehab and prison time, as well as relationships with other men.

The reality star appreciated the invitation and felt good about their progress. She then spoke with her producer about her concerns going into the dinner.

"As long as she's not acting super, super weird and 50 feet away from me. I just want to go over and just spend time and be around with her," she said. "I missed some good years. I know she feels the same way, but she's also pissed off too. A pissed off mini-Amber, I don't wanna deal with that."

The dinner itself wasn't much to write home about, unfortunately. Viewers saw Amber catch fill Kristina in on her school work, while trying to engage with her daughter. Leah, however, wasn't all that receptive to conversation.

At one point, Amber asked her Leah what a movie she wanted to watch was about, with Leah making a sassy face before simply answering, "Stuff." She later elaborated a bit, but overall seemed disinterested in having her mother around. After eating, Amber said she was tired and got up to leave. Leah didn't even say goodbye.

"I don't know what the point of this was," Amber said to herself in her car after. "For driving 20 something minutes. But that's cool."

Though she was clearly frustrated, both Gary and Kristina thought the eventing went as well as it could have gone, considering where things stood between Leah and Amber.

"Even though Leah has her own way she feels, I think she was comfortable enough. Leah didn't feel the need to go and do her own thing," Gary said. "I think she's trying to process how to interact with her mom. If anything, her mom probably wished it was a little different."

He felt Amber did well too, praising her for "not pushing or pressuring" their daughter for anything. Added Kristina: "I think it's a start."

The next day, Portwood herself admitted that while Leah was a bit "standoffish," she herself came to the realization that "part of this journey will be understanding and accepting Leah's feelings." Amber's producer then gave her props for not expressing her frustrations in front of Gary, Kristina and Leah.

"You don't wanna be like that in front of them when you're trying to hold things together," said Portwood. "With Leah, she was very off, but I already thought it was going to be that way."

"The only thing that bothered me with Leah was she was kind of getting a little snappy at a point. Don't talk to me like that, answer the question," she added. "Other than that, I was perfectly fine with everything. It felt good, it's been a little while since the last time I went there. I miss her a lot."

Going forward, she promised to keep showing up and be present, no matter what.