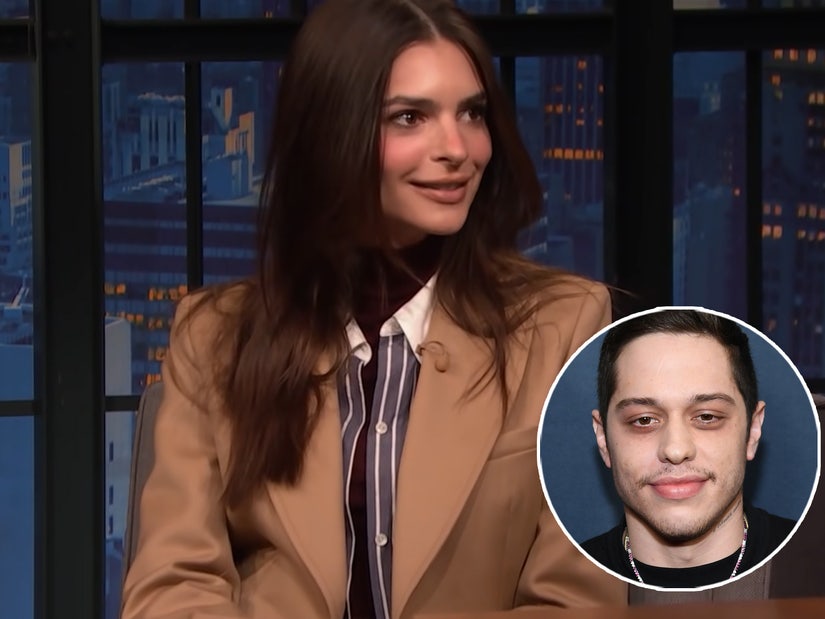 "Guys are like, 'Wow, what's that guy got?'" the model explained, before listing off some of the comedian's characteristics that could explain his appeal.

Emily Ratajkowski is sharing her thoughts on why women find Pete Davidson attractive.

On Monday's episode of "Late Night of Seth Meyers," the model -- who recently did a David LaChapelle photo shoot alongside Davidson -- gave her two cents on Davidson's allure, which has been discussed lately amid his rumored romance with Kim Kardashian.

Meyers first asked Ratajkowski about the photo shoot she did with Davidson, while showing off one of the images. Ratajkowski, 30, then recalled working with Davidson, 27. "I think he's great," she said, adding that the "SNL" was a "professional."

While Meyers, 47, poked fun at Davidson being the "not-a-model in the model shoot," Ratajkowski defended Davidson, joking that Meyers was "being a little mean."

"He's got the height, obviously women find him very attractive," she said as the audience cheered.

Meyers went back on his words, agreeing with his guest, "Yeah, you're right. I don't know why I'm like, 'How's that guy a model?'"

Ratajkowski said she thinks "only other men" question Davidson's allure, before listing off some of the comedian's characteristics that could explain his appeal.

"Guys are like, 'Wow, what's that guy got?' ... I mean, he seems super charming. He's vulnerable. He's lovely," she explained. "His fingernail polish is awesome. He looks good! He's great!"

"Good relationship with his mother, we love it!" she added. "It's hard to find them."

Davidson also appeared on Monday's episode of "Late Night with Seth Meyers." During his interview, the "Big Time Adolescence" star teased fans about his rumored romance with Kardashian. Davidson poked fun at the rumors out there without actually getting into them at all.

"I want to address something. I feel like I want to confirm if it's real," Meyers asked, appearing to reference all the relationship talk.

"There's a lot of people I walk by, people are like whispering, and, you know, making eyes at me. And, you know, but it is true," Davidson began -- before coyly adding, "I do have a show on Tubi coming out."

Davidson has dated a bevy of gorgeous female celebrities, including Kate Beckinsale, Margaret Qualley, Phoebe Dynevor, Kaia Gerber, Cazzie David, Carly Aquilino and of course, Ariana Grande, whom he was engaged to from June to October 2018,

As previously mentioned, the "King of Staten Island" actor has recently sparked romance rumors with none other than Kim Kardashian. It all began late last month when the two joined some pals, including Kourtney Kardashian and Travis Barker, on a trip to Knott's Berry Farm. Davidson and Kardashian, 41, were seen holding hands while riding a rollercoaster together. Sources told TMZ that the pair were just friends.

However, Davidson and Kardashian went on to grab dinner two nights in a row last week. Last Tuesday, per TMZ, the two met up for a private dinner at Campania restaurant in Staten Island, where Davidson is from. The following night, Davidson and Kardashian went out to dinner with friends at Zero Bond in New York City. According to witnesses, per TMZ, the pair seemed "very comfortable" with one another were showing off some PDA at both restaurants.