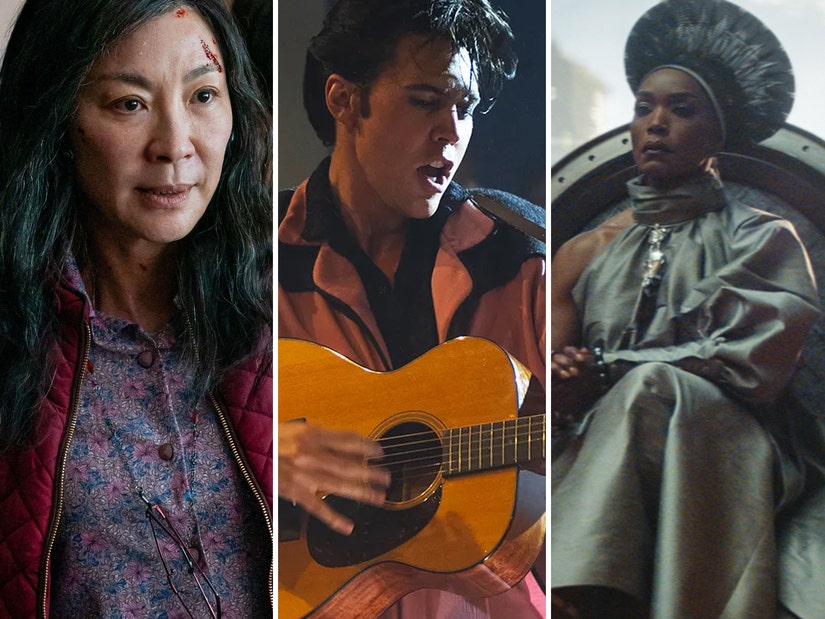 Jimmy Kimmel will host this year's event, held in March.

And the nominees are ...

On Tuesday morning, "Sound of Metal" star Riz Ahmed and "M3GAN" star Allison Williams were tapped to announce the nominations for the 95th Annual Academy Awards.

Angela Bassett made history, becoming the first actor from a Marvel movie to be nominated for their work in one of their films. "Black Panther: Wakanda Forever," however, failed to earn a Best Picture nom this year.

"Everything Everywhere All at Once" came out on top with 11 nominations, including first time nominations for most of the cast -- as Michelle Yeoh, Jamie Lee Curtis, Stephanie Hsu and Ke Huy Quan were all recognized. Other first-timers included Austin Butler for "Elvis," "The Banshees of Inisherin" costars Colin Farrell, Barry Keoghan and Brendan Gleeson, as well as Brian Tyree Henry for "Causeway" and Paul Mescal for "Aftersun."

Andrea Riseborough's last minute, celebrity-fronted campaign for a nomination paid off as well, as she earned love for "To Leslie."

"Babylon" failed to garner much attention, as its stars were shut out of the acting nominations and the movie wasn't recognized for Best Picture, Directing or anything outside of Production Design, Costume Design and Score. Another film that was totally -- and surprisingly -- shut out: Jordan Peele's "Nope."

Taylor Swift was also snubbed, after her song "Carolina" from "Where the Crawdads Sing" failed to make the cut, while Rihanna and Lady Gaga's tunes from "Black Panther" and "Top Gun" both got some love.

Other snubs: "RRR," which was only nominated for Best Original Song, James Cameron for directing "Avatar: The Way of Water," and actors including Viola Davis for "The Woman King" -- which was ignored completely -- Paul Dano for "The Fabelmans and Danielle Deadwyler for "Till." Tom Cruise also failed to earn a Best Actor nom for "Top Gun."

It's worth noting that the Best Director category this year once again skewed all-male, with no women directors getting nominated. The most glaring omission is Sarah Polley for "Women Talking," which earned both Best Picture and Adapted Screenplay nominations.

This year's show will be hosted by Jimmy Kimmel and airs live March 12 on ABC.

Best Picture
All Quiet on the Western Front
Avatar: The Way of Water
The Banshees of Inisherin
Elvis
Everything Everywhere All at Once
The Fabelmans
Tár
Top Gun: Maverick
Triangle of Sadness
Women Talking

Directing
Martin McDonagh, The Banshees of Inisherin
Daniel Kwan and Daniel Scheinert, Everything Everywhere All at Once
Steven Spielberg, The Fabelmans
Todd Field, Tár
Ruben Ostlund, Triangle of Sadness

Cinematography
All Quiet on the Western Front
Bardo, False Chronicle of a Handful of Truths
Elvis
Empire of Light
Tar

Sound
All Quiet on the Western Front
Avatar: The Way of Water
The Batman
Elvis
Top Gun: Maverick

Production Design
All Quiet on the Western Front
Avatar: The Way of Water
Babylon
Elvis
The Fabelmans

Makeup and Hairstyling
All Quiet on the Western Front
The Batman
Black Panther: Wakanda Forever
Elvis
The Whale

Original Song
Applause, from Tell It Like a Woman
Hold My Hand, from Top Gun: Maverick
Lift Me Up, from Black Panther: Wakanda Forever
Naatu Naatu, from RRR
This Is A Life, from Everything Everywhere All at Once

Documentary Short Subject
The Elephant Whisperers
Haulout
How Do You Measure a Year?
The Martha Mitchell Effect
Stranger at the Gate

Animated Short
The Boy, The Mole, The Fox and The Horse
The Flying Sailor
Ice Merchants
My Year of Dicks
An Ostrich Told Md the World Is Fake and I Think I Believe It

Film Editing
The Banshees of Inisherin
Elvis
Everything Everywhere All at Once
Tar
Top Gun: Maverick