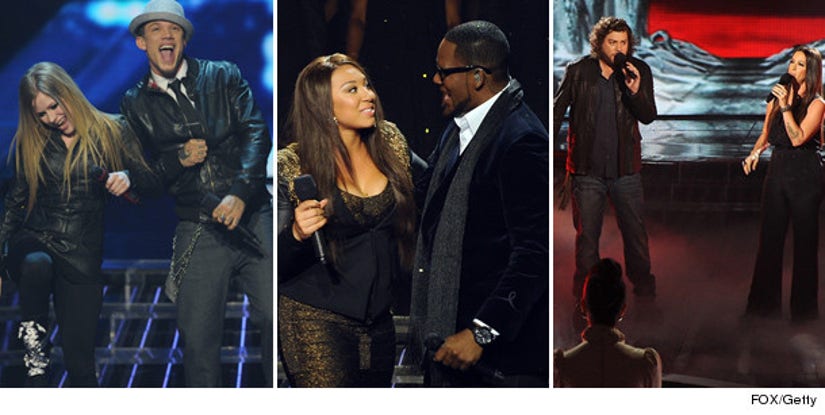 It was a star-studded showdown on "The X Factor" Wednesday night, with each of the top 3 pairing up with a celebrity duet partner.

Josh Krajcik was the first finalist to perform, sharing the stage with Alanis Morissette to perform her dark hit "Uninvited." While their duet was a little rigid, Josh loosened up for his solo performance to Etta James' "At Last." His mentor, Nicole Scherzinger, praised his consistency throughout the competition.

Chris Rene teamed up with Avril Lavigne. They sang "Complicated," and Chris added his own rap. Later in the show he reprised "Young Homie," an original song he performed during his audition round. Judge Paula Abdul called the performance "magic" while Simon Cowell called him brilliant.

The only female finalist, Melanie Amaro, closed the show thanks to a random draw. She sang "I Believe I Can Fly" with R. Kelly, the most difficult song of all the finalist duets. R. Kelly praised his partner, saying she was unbelievable. Simon Cowell said it was "close to godly." She later sang "Listen," which sealed her place as Simon's favorite.

"I think you, based on that performance tonight, to me, should be the winner of 'The X Factor,' because you're going to represent this country all over the world," Simon told Melanie. Do you agree with his pick? Check out the finalists' duets below and tell us who should be the winner.