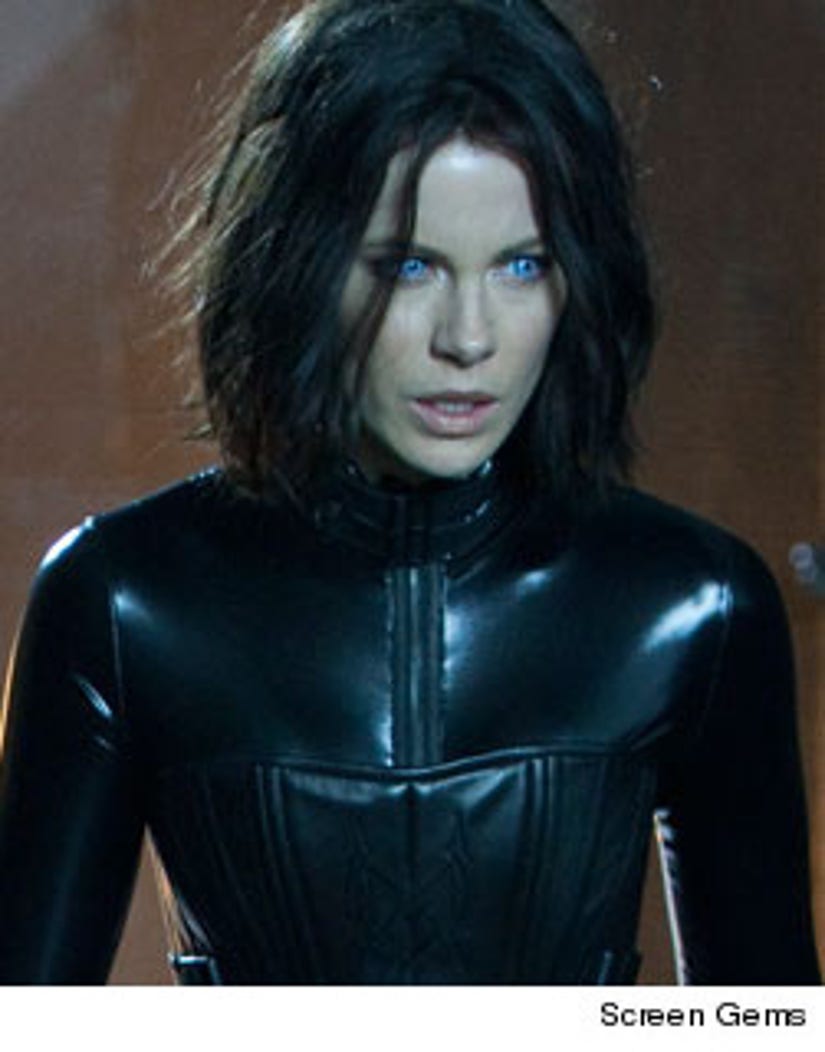 LOS ANGELES (AP) -- Kate Beckinsale is back with a vengeance, with her latest "Underworld" movie opening at No. 1 this weekend.

This is the fourth film in the vampire action saga. Beckinsale starred in the first two movies as the warrior Selene, then bowed out of part three but returned for this latest installment. "Underworld Awakening" was shown for the first time in 3-D as well as on IMAX screens, where it made $3.8 million. That's 15 percent of the film's weekend gross, which is a record for an IMAX digital-only run.

Sony had hoped the film would end up in the low-$20 million range. But Rory Bruer, the studio's president of worldwide distribution, says the fact that it did even better - despite a snow storm that hit much of the Midwest and East Coast - primarily has to do with Beckinsale's return.

"She is such a force. Her character - you just can't take your eyes off of her. I know the character is very dear to her, as well, and she just kills it," Bruer said. "The 3-D aspect of the film also brings something, makes it a fun, visceral ride."

Opening in second place was "Red Tails" from executive producer George Lucas, about the Tuskegee Airmen who were the first black fighter pilots to serve in World War II. It made an estimated $19.1 million, according to 20th Century Fox, which was well above expectations; the studio had hoped to reach double digits, said Chris Aronson, executive vice president of domestic distribution.

"I believe what George Lucas has stated all along: This is an important story and a story that must be told. It is a true story of American heroism and valor and audiences have really responded to this message," Aronson said. "People want to feel good about themselves, they want to be uplifted. We have enough hard crud going on in this country right now. Times are tough, and if we look back and are told a story of some really fantastic deeds, that's really compelling moviegoing."

Hollywood.com analyst Paul Dergarabedian said a grass-roots effort to get groups of people into the theaters to see "Red Tails," along with positive word-of-mouth, helped its strong showing. The film saw an uptick from about $6 million on Friday to $8.65 on Saturday.

Overall box office is up 31 percent from the same weekend a year ago, Dergarabedian said, thanks to new releases as well as movies like "Extremely Loud & Incredibly Close," which had limited runs for awards consideration at the end of 2011 and are now expanding nationwide. The 9/11 drama from Warner Bros., starring Tom Hanks and Sandra Bullock, came in fourth place with $10.5 million.

"This is a great, perfect January weekend. You've got these holdover films and newcomers creating an overall marketplace that people are really responding to," Dergarabedian said. "It sounds cliche but this marketplace really has something for everyone."

As for worldwide box office, "The Twilight Saga: Breaking Dawn - Part 1" has now crossed the $700 million mark. The first half of the finale of the girl-vampire-werewolf love triangle franchise has grossed an estimated $701.3 million in global box office receipts since its release last November, according to Lionsgate, which recently acquired Summit Entertainment, which distributes the series.