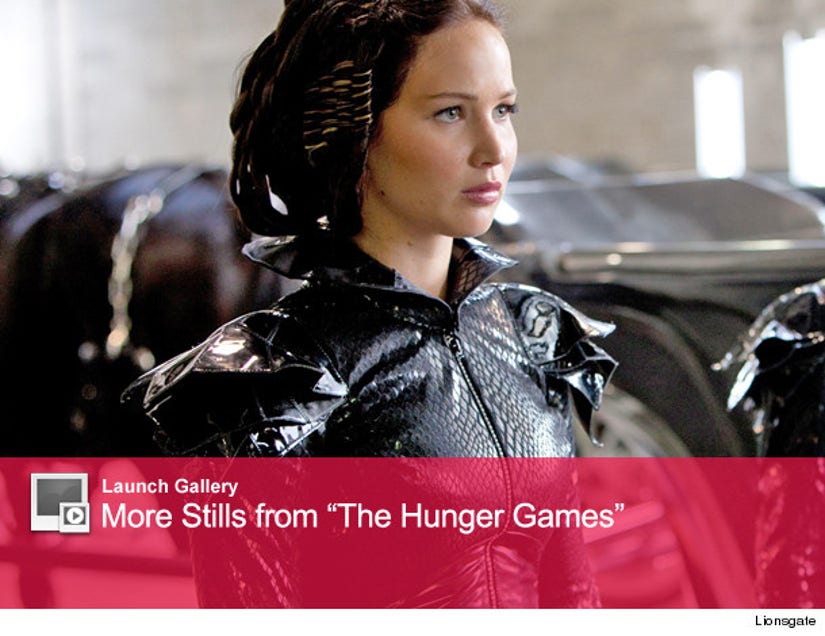 Jennifer Lawrence landed the role of a lifetime as Katniss Everdeen in "The Hunger Games" -- and it's a role that she almost didn't take!

The 21-year-old star recently sat down with toofab and a small group of journalists, where she revealed why she considered turning down the role, what it was like wearing the famous "Girl on Fire" dress and what happened during filming that landed her in the hospital.

Did you think you'd always be doing independent movies like "Winter's Bone"?
Yeah, I think that was why this was so weird, because I had planned my life and it was much simpler. It was doing small indies and maybe direct and produce and then having a family and moving back to Kentucky or something like that. I never saw my career being bigger than my life and so I was a little taken aback by this. At the same time, I wanted to make it for all the reasons I wanted to make all of the indies that I've done.

Does a film of this magnitude throw a wrench into your life plan?
Of course it threw a huge wrench into it, but its nice. It's different. It was an incredible opportunity and I would have regretted it every single day of my life if i had said "No," I'd be telling my kids "I passed on that. They gave it to me and I said 'No.'"

Did you ever think of saying "No"?
Yeah I did, because it was so big and I didn't know. I love my life and there's not a lot of time in a person's life where a yes or no decision can change your life forever and it will never, no matter what, go back to how it was before.

That was terrifying to me and even on a professional standpoint, I wanted to make small passion projects that I love and I still want people to lose themselves in characters. I don't want people to watch something and go "Look what Katniss is doing! Katniss is wearing a dress!" I didn't want that and then I realized that all of the "Nos" just happened due to be being scared and I didn't want to miss out on something just because i was scared.

How did the project come to you?
I read the books on my own and I loved them. Then I found out they were being made into a movie and I had a meeting with [director] Gary Ross. My agents did the brunt of the work!

You're blonde now, but brunette in the movie -- which do you prefer?
Blonde. I loved it when they first did it. During shooting I loved being brunette because I had never ever been brunette before, and then after we wrapped my blonde started coming back. It looked like it was going grey and then it got this rusty color, so it was either go blonde or go back to dark brown.

What kind of training did you have to do to play Katniss?
There was running, free-running, archery, combat, climbing, and yoga.

What was the hardest to pick up?
Archery. It's all like a mind game and all technique. Then when you get it wrong, it whips you on the inside of your arm and then you throw your bow and you have to do it again. But once you get it and get the technique and you can actually see something and be like "I want to hit that" and then actually hit it, it's great.

Did it stay with you?
Yes! I still have arrows in my car, which is weird, I didn't realize it until two of my friends were getting into the back seat of my car and were like "Why do you have spears back here?" [laughs].

We heard you were hospitalized during training -- what happened there?
I had to do wall runs during free running, which is when you run at a wall as hard as you possibly can so you can build up traction and climb up it eventually. I was doing them and when I run to jump, my feet just stayed down and then I went BOOM! Just hit my stomach as hard as I possibly could to the point that all the stunt doubles were like "Whoa! I haven't seen somebody hit the wall like that in years!"

So they roll me on the ground, I'm trying to be cool because there's all these stunt guys around so I couldn't burst into tears, which is what I wanted to do. Then my trainer the next day had me do crunches and I was like, "I can't I ran into a wall really hard yesterday." He is a hypochondriac and made me go to the hospital, get an MRI and an IV with the hot stuff, it was awful. And then turns out everything was fine ... I think it was like bruised, but not hospital worthy.

Donald Sutherland [Who plays President Snow] said you should change your name to Jennifer Olivier, you're so good in this -- how does that make you feel?
From Donald Sutherland ... It feels like a big kiss!

Was it hard not to think about where Katniss goes, how her character changes in the series while filming the first movie?
We don't know where we're going, we don't know what's gonna happen or what we're gonna grow into and become so it was kind of important to leave that out of my mind. At the same time, we're shaping a warrior, so she had to be scared. She's a 16-year-old girl fighting for her life and she had to be vulnerable because I never wanted anybody to feel at any point during The Games that she couldn't die ... but at the same time, that strength of a budding warrior, Joan of Arc, had to be there.

Katniss seems to have a lot in common with your character in "Winter's Bone" ...
I still saw this as a drama. I never saw it as a thriller, as an action movie, I read this as a drama and filming it felt like an indie. They have a lot in common, but it's important when you're making characters ... they can't ... they're completely different people and it was important to keep them separate.

Why do you think Katniss and Rue bond so much?
She talks about it in the book, she was the same age as Primm [Katniss' younger sister] and also, she helped her. I do think she reminded her of Primm and that's why they started that relationship.

How was your relationship with Amandla Stenberg, who plays Rue?
Easy. Amandla is absolutely amazing. I still text with her, she's like 25-years-old [In actuality, Amandla is 13]. She's so much cooler than I am. She's funny and she's smart. There's so many pictures of her, with us like cracking up and me like tossing my head back laughing. She's awesome.

What did you think about the script after reading it for the first time?
Reading the script was incredible. I called Gary right afterwards and said "You did it." It was nerve-wracking because I was a big fan of the books and I went into it like a fan of the books, completely skeptical and looking for every single flaw and I thought that it was absolutely beautiful. Just a beautiful war drama.

Did reading the books help you prepare or did you have to clear everything you read out of your brain?
Filmmaking wise, we had to throw it out. We took everything that we needed and that we loved from the book and that was in the script. Then we had to focus on the script, the script it what we we were making and not the books. From an actor's standpoint, having your characters inner dialogue is incredibly valuable and not something that you get a lot normally, you have to make it up yourself.

Fans are anxiously anticipating seeing you in the Girl on Fire dress. What was filming that scene like?
Amazing, that was my favorite part! That dress was unbelievable, it was most of our budget. Dead serious! When I walked onto set, Gary was like "That's our budget!"

It was beautiful and really heavy and honestly, I think they used a touch of CG, but they didn't really need it. It was unbelievable and it wasn't "Dancing with the Stars." Judi [Costume Designer Judianna Makovsky] did such an amazing job of making everything beautiful.

Are you prepared for frenzy?
A little bit, but at the same time I don't really know until I get there.

"The Hunger Games" lands in theaters this Friday. Click here to read our review of the movie!