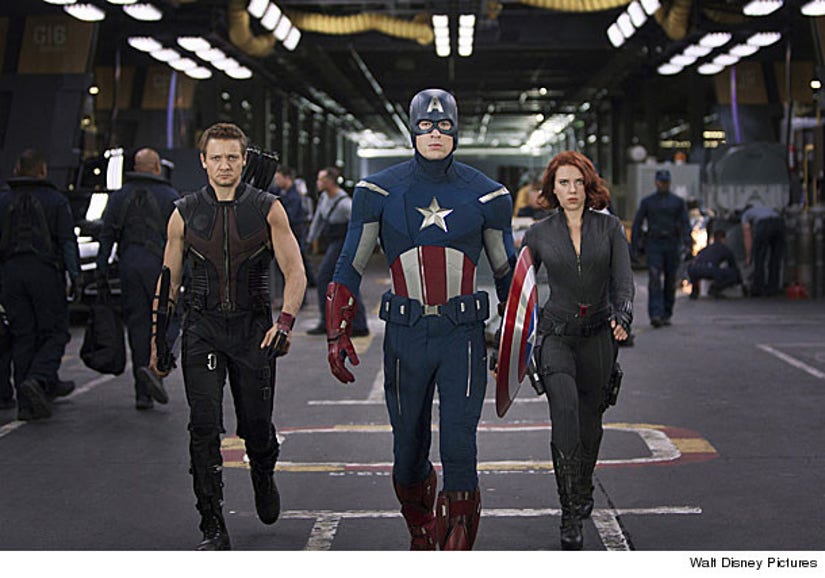 LOS ANGELES (AP) -- "The Avengers" has extended its box-office superpowers with a record $207.4 million opening weekend domestically, an even bigger start than originally projected.

Final figures from distributor Disney on Monday put the film's debut $7.1 million higher than the studio had estimated a day earlier.

With a superstar cast, great reviews and glowing word of mouth from fans, "The Avengers" bounded past the previous record of $169.2 million set by last year's "Harry Potter" finale.

The Marvel Comics adaptation also has taken in $447.4 million overseas since it started rolling out in international markets a week earlier. That brings its worldwide total to $654.8 million in just 12 days.

The film drew in comic-book fans and general audiences alike, with the audience evenly split between those over and under 25, according to Disney. Teens packed theaters, couples came to see it as a date movie, and parents with children made it a family outing.

"Fans, non-fans, parents, non-parents. Any kind of descriptor you can come up with, people are embracing this film," said Dave Hollis, Disney's head of distribution.

Over the same first weekend of May 10 years earlier, "Spider-Man" rocked Hollywood with a $114.8 million debut, the first movie ever to open with more than $100 million in a single weekend.

"It was unthinkable. People thought, 'Wow, a blockbuster film should do $100 million in its whole run, not just opening weekend,'" said Paul Dergarabedian, analyst for box-office tracker Hollywood.com. "The $200 million opening weekend is something I didn't think I would ever see, or something I wouldn't see until after I retired."

"The Avengers" leaped beyond the "Potter" finale with a long, shrewd buildup by Marvel Studios, which had tucked teasers for its eventual superhero ensemble tale into solo films such as "Iron Man," "Thor" and "Captain America" for years.

Directed by Joss Whedon, who has been reading "The Avengers" comics since he was a boy, the film features Robert Downey Jr. as Iron Man, Scarlett Johansson as Black Widow, Samuel L. Jackson as Nick Fury, Mark Ruffalo as the Hulk, Chris Hemsworth as Thor, Chris Evans as Captain America and Jeremy Renner as Hawkeye.

The sum of all of those superheroes proved more than the parts. "The Avengers" already has surpassed the worldwide box-office totals for "Iron Man," "Iron Man 2," "Thor" and "Captain America" in their entire runs.