The upfront presentations and parties continue to roll on in New York City, with ABC stars -- including a svelte Kelly Clarkson and, well, Hayden Panettiere's cleavage -- in the spotlight on Tuesday night!

The original "American Idol" winner hit the red carpet with Robin Thicke and John Legend to celebrate their new singing competition series "Duets," which premieres on May 24. Kelly looked fit and fabulous in a curve-hugging floral print dress, sandals and chunky bangs.

22-year-old Hayden was on hand to support her new fall drama "Nashville," in which she plays an up-and-coming country singer who isn't exactly the nicest girl in the world -- and who relies on her cleavage to get her by. Hmm, life imitating art? The former "Heroes" star flaunted her assets in a brazen red vintage Moschino Couture dress and matching lips. 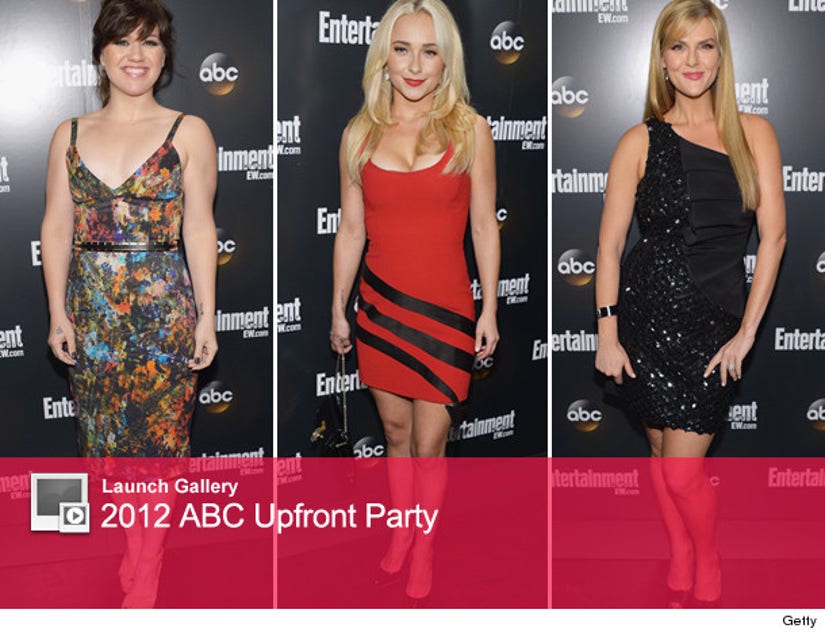 Some of the other ABC stars who turned up to celebrate the network's upcoming schedule include Emily VanCamp and Madeleine Stowe from "Revenge," the cast of "Happy Endings," Krysten Ritter from "Don't Trust the B---- in Apartment 23,” and those in new shows like Hayden's "Nashville" costar Connie Britton, Terry O'Quinn and Vanessa Williams from the supernatural show "666 Park Avenue," and Reba McEntire and a super-skinny (and blonde!) Sara Rue of the family comedy "Malibu Country."

Plus some more big ABC news -- host Tom Bergeron confirmed on the show last night that the next season of "Dancing with the Stars" will be an All-Star edition, bringing back favorite dancers from previous years! Who would you like to see compete again for the mirrorball trophy?

Click "Launch Gallery" above to see shots of all the new and returning ABC stars, and look below for the network's full fall schedule!