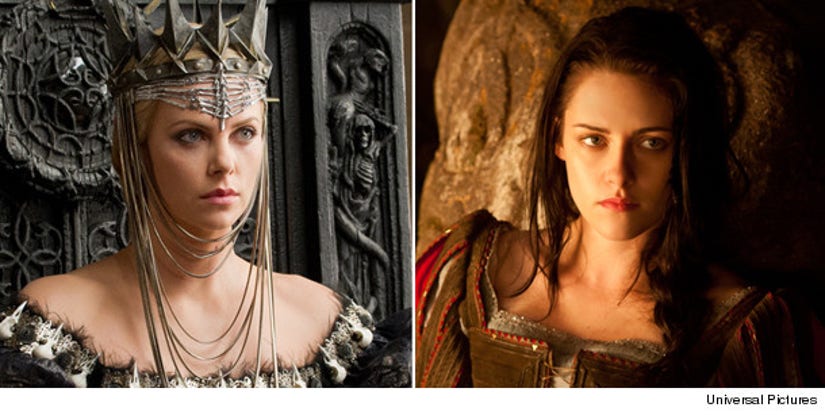 The actress plays Ravenna, the evil Queen who will go to any length to maintain her youth and beauty -- including draining the life force of her female subjects.

The key to her everlasting beauty lies in Snow White, played by Kristen Stewart. The fairytale princess possesses a grit and fire that her character Bella from "Twilight" lacks, mainly because Snow White is driven by revenge instead of love. The target of Snow's vengeance is Ravenna, who usurped her father's throne and imprisoned her for years.

Snow is aided in her quest by The Huntsman (Chris Hemsworth), her childhood friend William (Sam Claflin), and eight not-so-merry dwarves. The male characters help propel the storyline, but ultimately this is a battle between the two female leads.

Ravenna's presence doesn't only stem from her beauty and lavish costumes, but her rage. There are points Theron becomes so furious that you expect she'll pop a blood vessel in her unblinking eyes. When she finally lets go, it is a scary sight to behold. Stewart holds her own against the Oscar winner, showing a range of emotions from anger to sadness to courage.

"Snow White" is a stylish film with incredible special effects. The action sequences are satisfying, but those expecting large-scale CGI battles ala "Lord of The Rings" won't find them here. The middle does feel slow in parts, perhaps because Theron has less screen time then. The romantic subplot feels slightly underdeveloped as well.

At one point in the film, Snow White recites The Lord's Prayer, which temporarily takes the audience out of the incredible fantasy world. But Theron's magical performance and the stunning visuals help draw viewers back in.

"Snow White and the Huntsman" opens this Friday. Check out the trailer below!