Kelsey Grammer and his wife Kayte recently celebrated their marriage in a big way -- by renewing their vows in Las Vegas ... with a very pregnant belly!

The 57-year-old actor and his 32-year-old love hit up the Little Church of the West in Nevada city to reconfirm their commitment to each other on June 02, 2012. Photos of the renewal were released today.

The groom donned a cream suit with a lavender shirt and dark purple tie, while the bride wore a short cream, strapless dress and flaunted a very big baby bump!

The couple is expecting twins next month, though we'll be surprised if she makes it that long! The pair also celebrated their growing family with a baby shower at Dumbar in Chicago Tuesday night. 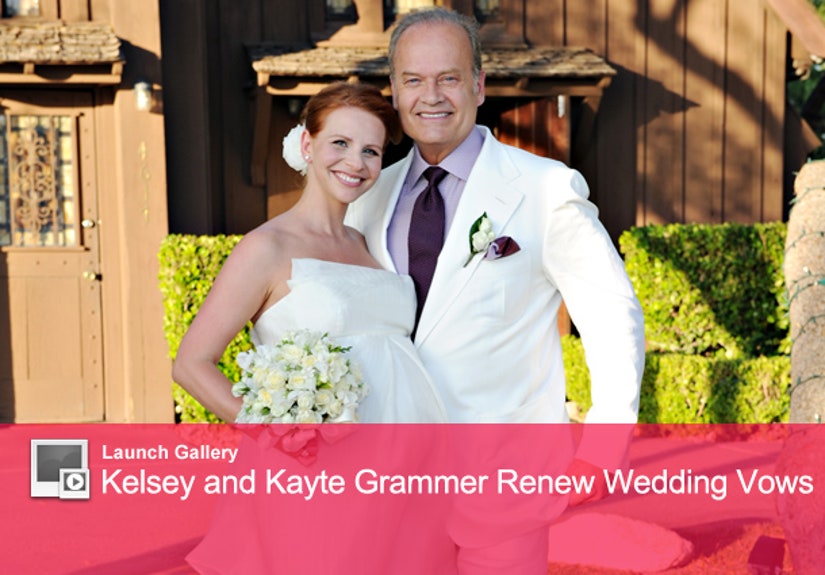 The May-December pair has been together since 2010 and married for the first time in February of 2011. Kelsey's said "I do" four times already and has four children from previous marriages.

In 1997 Kelsey wed former Playboy model Camille Donatacci, who currently stars on Bravo's "Real Housewives of Beverly Hills." They share two children together, but called it quits in 2010.

Perhaps the fourth time is the charm ... or fifth if you count Kelsey and Kayte's recent renewal!

Click "Launch Gallery" above to see pics from their shot-gun wedding!