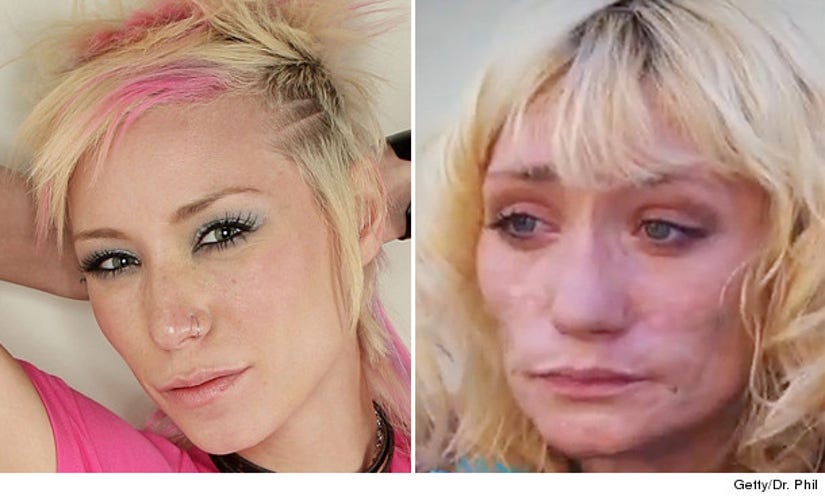 With her quirky personality and unusual beauty, Jael Strauss is one of the most memorable contestants in "Top Model" history. During Cycle 8, Jael's friend died of a drug overdose and she struggled to stay in the competition, finishing 5th.

In the five years since her season aired, her looks -- and life -- have been ravaged by meth addiction. Jael's family have staged an intervention with the help of Dr. Phil. Watch the dramatic footage below:

Caridee English, who won a different season of "America's Next Top Model," commented about Jael's plight on Gawker:

"They should have evaluated her a lot more before letting her on the show. All they saw was a personality good for television. Well, this hopefully will save at least her life and someone watching. Everything happens for a reason."

Caridee went on to describe about life after "Top Model" and how host/creator Tyra Banks and the show did little to equip her for the real modeling industry:

"Tyra won't do anything [for Jael]. She provided a wonderful platform for girls to have a chance at their dream, but after there is no "Tyra Mail." I had to guide myself, and even though I won a model competition I still had no idea what the modeling BUSINESS was like. I had no idea what the industry was really like. I was famous, but no one wanted to take my picture."

"The fashion industry had NO idea how to market us. Our agents, our managers... We became instant celebs, but had the portfolio of a rookie model. Even though we just were named "TOP" our place in line at Fashion World was at the bottom. The industry many times didn't care about our name, but did turn a snobby cheek to the name ANTM."

Caridee did admit that she chose to be on the show and was "thankful" she followed through with her decision. She's also been one of the more successful winners, landing several modeling gigs and hosting Oxygen's "Pretty Wicked." But most of the show's participants have faded into obscurity, and in the case of Jael, misery.

Eva Marcille, the winner of Cycle 3, echoed Caridee's statement on her show "Girlfriend Confidential: LA." Even though she was managed by Tyra Banks for a few years after "Top Model," she continually needs to fight to find work, despite her "Top Model" crown.

See what the other winners of "America's Next Top Model" have been up to after the show:

Meanwhile, the 19th Cycle of "Top Model" is struggling in its Friday night time slot, and the show may be near it's end.