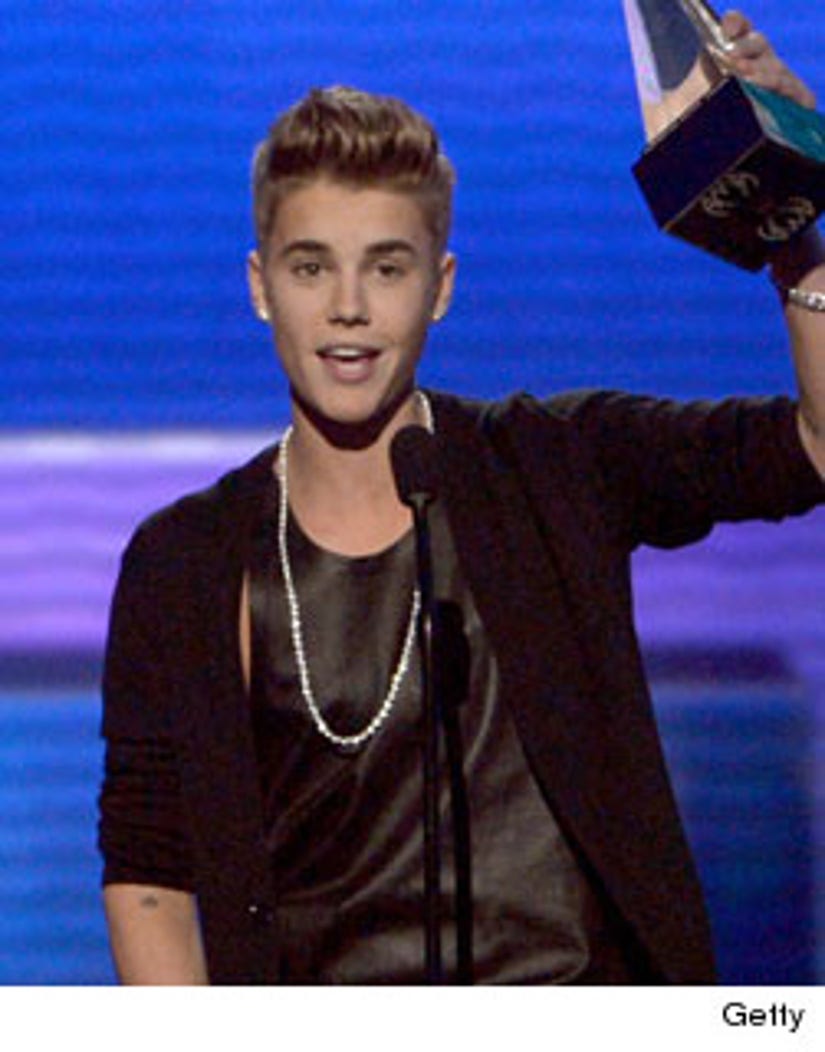 LOS ANGELES (AP) -- Justin Bieber may be Canadian, but he was the all-American boy at Sunday night's American Music Awards.

The pop singer dominated the awards show, winning three trophies, including artist of the year. His mom joined him onstage as he collected the award, beating out Rihanna, Maroon 5, Katy Perry and Drake.

"I wanted to thank you for always believing in me," Bieber said, looking to his mom.

The 18-year-old also won the honor in 2010. He said it's "hard growing up with everyone watching me" and asked that people continue to believe in him.

But the teenager who brought his mom as a date also got in some grinding with Nicki Minaj -- who shared the stage with him and took home two awards -- and a kiss on the neck from presenter Jenny McCarthy.

"I did grab his butt," McCarthy said backstage. "I couldn't help it. He was just so delicious. So little. I wanted to tear his head off and eat it."

Another collaboration was the night's most colorful performance: Korean rapper PSY and MC Hammer. Hammer joined the buzzed-about pop star for his viral hit "Gangnam Style." PSY rocked traditional "Hammer" pants as they danced to his jam and to Hammer's "Too Legit to Quit."

Minaj, who wore three different wigs and four outfits throughout the night, repeated her AMAs wins from last year, picking up trophies for favorite rap/hip-hop artist and album for "Pink Friday: Roman Reloaded." She was in an all-white get-up, including fur coat and pink hair when she performed her new song "Freedom." The scene was ghostly and snowy, as a choir -- also in white -- joined her onstage. One background singer stole the performance, belting semi-high notes as Minaj looked on.

Usher kicked off the three-hour show with green laser lights beaming onstage as he performed a medley of songs, including "Numb," "Climax" and "Can't Stop, Won't Stop," which featured a smoky floor and a number of backup dancers, as Usher jammed in all black, with the exception of his red shoes. He won favorite soul/R&B male artist.

His protege Bieber won favorite pop/rock male artist in the first award handed out and gave a shout-out to those who didn't think he would last on the music scene.

"I want to say this is for all the haters who thought I was just here for one or two years. I feel like I'm going to be here for a very long time," he said.

He also won favorite pop/rock album for his platinum-selling third album, "Believe." He gave a stripped down, acoustic performance of "As Long As You Love Me," then transitioned to the dance-heavy "Beauty and a Beat," where Minaj joined him onstage, grinding with the teen for a few seconds.

"This is unreal. I want to thank the fans. You guys are the ones who voted on this," she said.

Swift gave a masquerade-themed performance of the pop song "I Knew You Were Trouble." She sang onstage in a light dress while dancers wore mostly black. But then she changed into a red corset and black skirt, matching their dark mood. She even danced and sang on the floor as lights flickered throughout the performance.

Dick Clark, who created the AMAs, was remembered by Ryan Seacrest and an upbeat performance by Stevie Wonder.

"What a producer he was," said Seacrest, as Wonder sang his hits, including "My Cherie Amour."

"I am floored. Wow," she said, thanking Bieber and his manager, Scooter Braun.

Party girl Ke$ha was glammed up on the red carpet, rocking long, flowy blonde hair and a light pink dress. She switched to her normal attire when she performed her hit single "Die Young." It was tribal, with shirtless dancers in skin-tight pants, silver hair and skeleton-painted faces, who also played the drums. Ke$ha was pants-less, rocking knee-high boots and rolling on the floor as she finished up the song.

Minaj and Christina Aguilera were blonde bombshells, too: Minaj's hair was busy and full of volume and she sported a neon strapless gown to accept her first award. Aguilera wore a blonde bob in a purple dress that matched her eyeshadow.

Aguilera performed a medley of material from her new album and joined Pitbull onstage.

Kelly Clarkson also hit the stage, making a nod to her "American Idol" roots with a number on her dress and three judges looking on as she sang "Miss Independent." Then she went into "Since U Been Gone," "Stronger" and "Catch My Breath."

"These people that go on these shows are so talented, you know? And I would love to see if so many of the other artists that are out there today would go back and try out for these shows, because they might get their behinds kicked by some of the contestants," she said.

American Music Awards nominees were selected based on sales and airplay, and fans chose the winners by voting online. At this award show, even the stars were fans: Pink said on the red carpet that she'd like to collaborate with Lauryn Hill. Cyndi Lauper said her musical playlist includes Pink and Minaj. Boy band The Wanted said they were excited to see PSY and Colbie Caillat wanted to watch No Doubt.

"What makes the American Music Awards special is the fans choose the winning artists," said Chester Bennington of Linkin Park, who won favorite alternative rock artist and performed "Burn It Down," as Brandy sang along and Gwen Stefani, Usher and Phillip Phillips bobbed their heads.

Along with Rihanna, Minaj was the top nominee with four nominations.