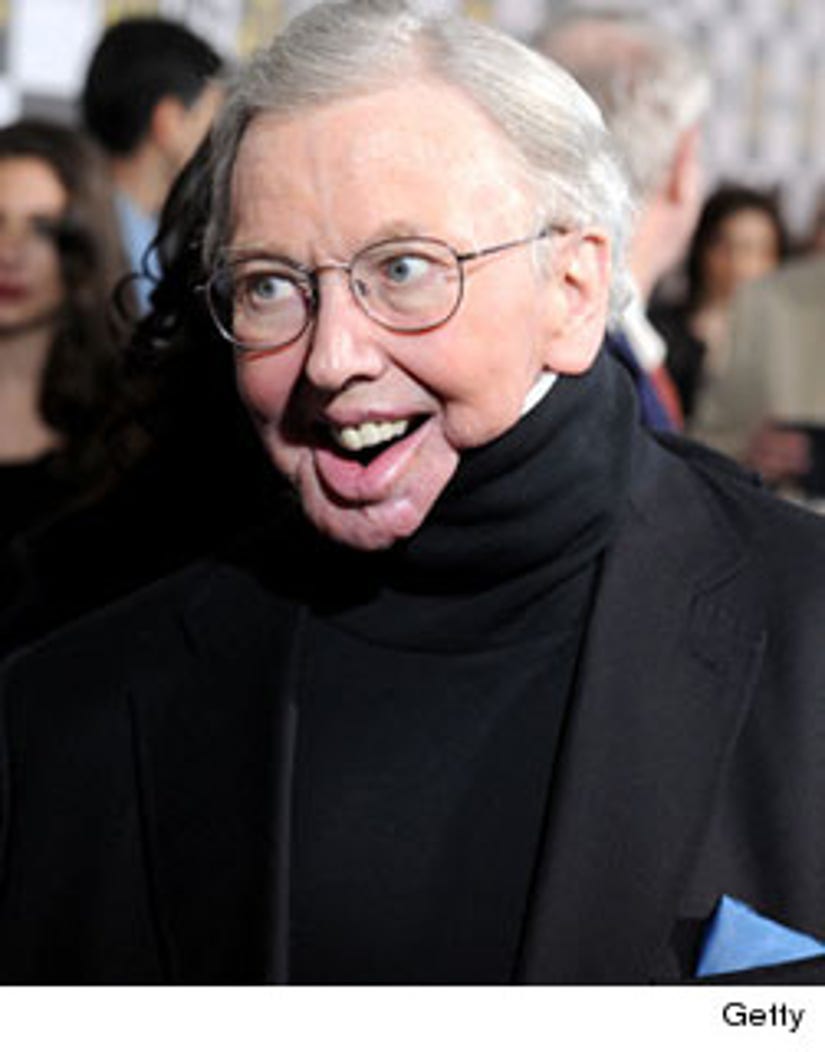 Longtime film critic Roger Ebert has died after a long battle with cancer. He was 70 years old.

Ebert reviewed movies for the Chicago Sun-Time for 46 years and on TV for 31 years, most famously with fellow critic Gene Siskel (who died in 1999) and their "thumbs up, thumbs down" rating system. After Siskel's death, Ebert was joined by Richard Roeper.

Ebert battled cancers of the thyroid and salivary gland, losing part of his lower jaw in 2006.

Ebert won a Pulitzer Prize and a star on the Hollywood Walk of Fame.

Just two days ago, Ebert went on a "leave of presence" from the Sun-Times, writing:

"What in the world is a leave of presence? It means I am not going away. My intent is to continue to write selected reviews but to leave the rest to a talented team of writers handpicked and greatly admired by me. What's more, I'll be able at last to do what I've always fantasized about doing: reviewing only the movies I want to review.

It really stinks that the cancer has returned and that I have spent too many days in the hospital. So on bad days I may write about the vulnerability that accompanies illness. On good days, I may wax ecstatic about a movie so good it transports me beyond illness.

So on this day of reflection I say again, thank you for going on this journey with me. I'll see you at the movies."

His wife, Chaz, released this statement:

"I am devastated by the loss of my love, Roger -- my husband, my friend, my confidante and oh-so-brilliant partner of over 20 years. He fought a courageous fight. I've lost the love of my life and the world has lost a visionary and a creative and generous spirit who touched so many people all over the world. We had a lovely, lovely life together, more beautiful and epic than a movie. It had its highs and the lows, but was always experienced with good humor, grace and a deep abiding love for each other.

Roger was a beloved husband, stepfather to Sonia and Jay, and grandfather to Raven, Emil, Mark and Joseph. Just yesterday he was saying how his grandchildren were “the best things in my life.” He was happy and radiating satisfaction over the outpouring of responses to his blog about his 46th year as a film critic. But he was also getting tired of his fight with cancer, and said if this takes him, he has lived a great and full life.

We were getting ready to go home today for hospice care, when he looked at us, smiled, and passed away. No struggle, no pain, just a quiet, dignified transition.

We are touched by all the kindness and the outpouring of love we've received. And I want to echo what Roger said in his last blog, thank you for going on this journey with us."

Our deepest condolences to his friends and family. We'll see you at the movies, Roger.

Since the news broke, celebrities, directors and others in the entertainment industry have taken to Twitter to share their tributes:

President Obama
Michelle and I are saddened to hear about the passing of Roger Ebert. For a generation of Americans - and especially Chicagoans - Roger was the movies. When he didn't like a film, he was honest; when he did, he was effusive - capturing the unique power of the movies to take us somewhere magical. Even amidst his own battles with cancer, Roger was as productive as he was resilient - continuing to share his passion and perspective with the world. The movies won't be the same without Roger, and our thoughts and prayers are with Chaz and the rest of the Ebert family.

Richard Roeper
The guy you saw on TV, telling all those great stories, and having such great passion for movies and being so passionate about so many things, first and formost his family...That was the real Roger Ebert.

Steve Martin
Goodbye Roger Ebert, we had fun. The balcony is closed.

Justin Lin
RIP @ebertchicago Thank you for always being honest & fair. I'm forever grateful for the discourse you created 10 yrs ago to start my career

Elijah Wood
very sad to hear of Roger Ebert's passing. hard imagine a world without him.

Anna Kendrick
Shocked and truly, deeply saddened at the loss of the great Roger Ebert. A legend. His voice will be missed.

Diablo Cody
R.I.P. Roger Ebert. It was a privilege to interact with you. Thank you for the support, the criticism, and the true love for the movies.

Michael Moore
Roger Ebert. Millions of thumbs up for you. RIP

Marlee Matlin
So sad to read passing of Roger Ebert. He will be forever be watching movies with Gene Siskel. Thumbs up to him!

Justin Long
Reading Roger Ebert's reviews as a kid was instrumental in determining what I did w my life. He will be sorely missed.

Anthony Bourdain
RIP the inspiring Roger Ebert. One of the greats.

Neil Gaiman
RIP and goodbye Roger Ebert. You sent me such nice emails over the years. I loved your twitter feed, enjoyed your reviews. Thank you.

Dianne Warren
There is an empty seat in the theater that no-one else will fill. RIP Roger Ebert

Darren Aronofsky
we lost a thoughtful writer, i remember my first review from him, pi (i got his and siskel's thumbs) it was a career highlight. #rogerebert

Albert Brooks
R.I.P. Roger Ebert. One of the greats in his field. I'm very sad.

Adam Shankman
So sad to hear about @rogerebert. RIP brave unyeilding soldier. Maybe you get your own show now with the big guy! We will miss you. Xo

Dane Cook
Sad to hear about Roger Ebert passing away. RIP kind sir. I give your life two enthusiastic

Seth Green
Ever a class act, @EbertChicago made me love movies even more.