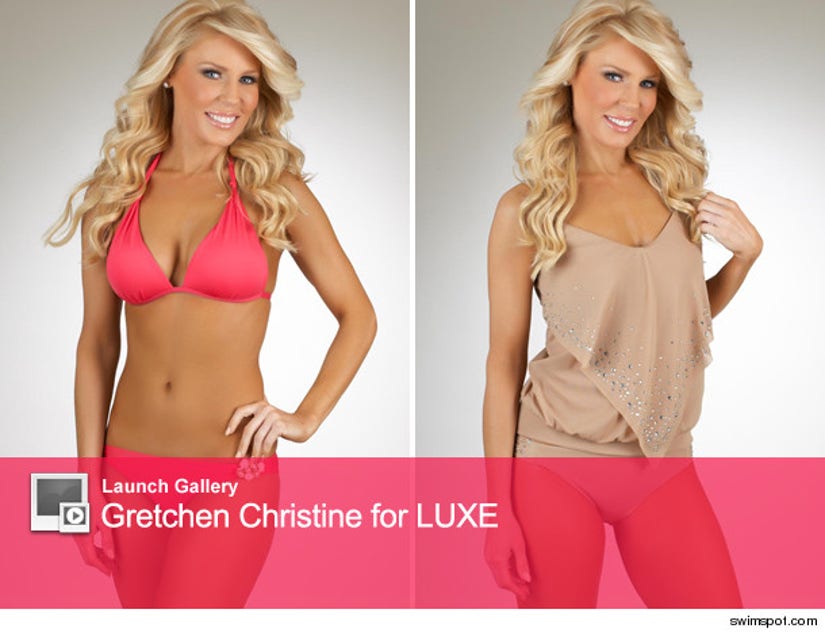 "The Real Housewives of Orange County" star opened up to toofab's Brittany Kyles about her new sexy swimsuit collection, Gretchen Christine for LUXE, and this season's drama on the hit Bravo reality show.

So how did she come up with the bikini collection? "I did this collaboration with Lisa Vogel from LUXE – I met her at a fashion show and we just really hit it off and started talking about how I've always wanted to add swimwear to my collection. We just connected and she said let's start talking about a collaboration," Rossi told us.

You may remember Gretchen's nude rhinestone bikini from the ladies' Mexico trip -- well, now you can purchase the same one at swimspot.com. “The swimsuit I wore in that scene actually sold out nationally in two days," Gretchen revealed.

While the blonde beauty has one of the best bikini bods on show, she made sure that any woman will feel confident in the collection.

“I really wanted it to be a swimwear line that anyone could wear; anyone could feel comfortable in and for any body type," she said. And that's why Gretchen's line has three different silhouettes, "We have a skimpier version (the one with the bling on it), the medium coverage and the tankini version," she added.

While Gretchen's bikini line has been doing great, some of her relationships with her fellow "housewives" this season have taken a hit. Rossi's especially had a rocky start with his season's newest cast member, Lydia McLaughlin.

"I think what happened is that Lydia heard grumblings from the girls and sort of got an opinion from that. I think she was pre-judging me without even getting to know me yet. So those couple situations that we were in, where something transpired, she was trying to prod a little and I didn't like it. I also didn't like that she was coming in with such strong opinions that she didn't really know anything about," Gretchen told us.

But since the filming has wrapped, the two have actually become closer, "We've been texting back and forth for the last month or so now being like, 'remember how we're like best friends now and we didn't even talk during the season.' It's kind of funny and ironic how that works," she said.

Gretchen and Tamra Barney have also had some problems this season, and while the two are still friends ... there's been some drama since Barney reconciled with Alexis Bellino.

“Alexis and I are civil with each other, but it's not like we call each other or hangout. The thing I think that was unfortunately not shown [on the show] is that I was not upset about Tamra and Alexis making amends. I think anytime anyone can make amends that's great, and that's your personal choice. What bothered me was that I felt like I was getting a little played by Tamra – she was texting me saying one thing about Alexis, and then doing another," Gretchen explained.

"When I asked her about inviting Alexis dress shopping I said, 'Did you really invite Alexis dress shopping?' I was very confused about that. And normally on camera I want to know what I am getting into before I walk into a situation, and she said, 'no, who told you that?' and I said, 'production said all the girls were invited' and she continued on that she didn't want her there and couldn't un-invite her,” she said.

Now that Tamra's big day is done and over with (she said "I do" to her beau Eddie Judge earlier this month), the 34-year-old can focus on her own wedding and family. While Gretchen recently got engaged to her long-time boyfriend, Slade Smiley, she's only started to think about her wedding plans ... and there may be a baby before a wedding band!

"We've just been so busy with my work and my businesses, it's just been so hard to get in planning mode. Quite frankly it was Tamra's moment there for awhile, so it was just the timing of everything. Now that everything is done, I think that I can start talking about it more and what it is that we want to do. It took four years to get engaged so I'm not sure how quickly a wedding is going to happen," she confessed.

"Who knows, maybe there will be a baby before a wedding, we just haven't made any of those final decisions yet," Rossi added. But her family isn't the only aspect of her life she wants to expand -- the reality star plans to grow her Gretchen Christine bikini line into a resort wear collection.

As for now, Rossi says stay tuned to this season of "The Real Housewives of Orange County" -- even though some of the episodes have been hard for her to watch.

“It's very difficult. It's not easy. Especially when you think people are your friends and have your back, and then you watch the show and see what they are saying, it's just really disappointing. And like I said I just don't like being played, being told something one way and then hearing it later another. At the end of the day I just try to live my life with integrity and that's all that matters," she told us.

You may have seen promos for tonight's episode where Heather Dubrow finds out that her blonde costar was not offered a spot on "Malibu Country," and the ladies label Rossi a liar. To that, Gretchen would like to clear the air. Check out the promo below:

“So for Heather to say that I was lying about that is just silly, there's no reason for me to lie about that, I don't really ever say things that I don't have proof of, so I encourage people to keep watching. The truth will come out. I think Heather was just getting different information than I was getting. Obviously I was disappointed to hear that Heather went to speak with the girls about that. I consider her a friend so I would have just hoped that she'd come talk to me first instead of the other women, but I guess that makes better TV," Rossi explained.

The OC ladies celebrate their 100th episode tonight -- make sure to check next week's episode to see what happens with Heather and Gretchen!