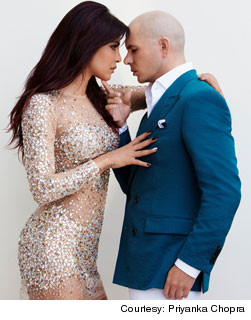 Pitbull has collaborated with some of the biggest names in music: Jennifer Lopez, Ne-Yo and Christina Aguilera, just to name a few.

The rapper is living up to his "Mr. Worldwide" nickname by teaming up with international beauty Priyanka Chopra.

Like many crossover stars, Priyanka got her big break in beauty pageants -- winning Miss World when she was just 17 years old. Over the last decade, she's become a bonafide star in her native India, with a successful film career.

She's also embarked on a music career as well, with her new duet with Pitbull -- aptly named "Exotic" -- dropping Tuesday, July 9th on iTunes (the music video will premiere on VEVO on July 11th).

Check out an exclusive preview of their music video below:

UPDATE: The full video has just been released:

toofab spoke with the Bollywood beauty exclusively about her new single "Exotic," her collaboration with Pitbull, and the challenges of crossing over to the States:

toofab: How did "Exotic" come about? What's the message of the song?

Priyanka: It was pretty organic, actually. "Exotic" was born from a discussion with RedOne when we first met in London -- I was so fortunate to work with one of the most talented producers and songwriters in the world on my first album. Literally after 5 minutes (or less) of discussing the kind of music I wanted to make, Red played a version of "Exotic" for me and I thought …"ok, this guy gets me." Even before Pitbull and I added our own flavors to the track, the song had so much character and infused so many different cultures, which is exactly the kind of music I had envisioned making. Once we knew this was the song, RedOne brought it to Pitbull. And then while recording the track, I was inspired to write the Hindi lyrics ... it was all just so spontaneous and amazing. This is a fun summer song created by fusing many cultures together, which itself is a message ... I think.

toofab: How was it working with Pitbull?

Priyanka: It was a fantastic experience. Not only is he immensely talented, he is SUCH a great guy. He has an infectious energy and enthusiasm that instantly puts you at ease – making music with him is so much fun.

toofab: "Exotic" is a blend of three distinct styles – pop, rap and Indian music. Was it a challenge bringing them together?

Priyanka: It was actually a breeze ... an insanely seamless and creative process, where the ideas and the music just organically came together. It was instantaneous, it felt right, and it works ... we knew it was a great sound that would appeal to a global audience.

toofab: Who are your musical influences?

Priyanka: Growing up, I was exposed to a many genres of music, and my parents had pretty varied tastes. Mom favored Jimmy Hendrix, Bruce Springsteen, U2, and the like, while my dad favored Indian music greats like Mohd. Rafi R.D. Burman. There was always music in our house! My dad has been my greatest musical influence and supporter. My personal list of musical influencers is quite long and varied: Tupac, Michael Jackson, Whitney Houston ...

toofab: Bollywood stars are making inroads into Hollywood. What do you hope to accomplish?

Priyanka: Right now, I’m just glad to have been given this opportunity to share my music with the world. Through my music and other aspects of who I am, I hope to be able to give the world a taste of India and all that it offers.  I have always believed in pushing the envelope and I hope that this new journey gives me the opportunity to learn and do new things.

toofab: Bollywood is known for being a little more conservative. Do you feel you have to compromise to fit a Western audience?

Priyanka: The Indian film industry has evolved considerably over the years and is today reflective of the modern society that we live in.  What you see is what you get… this is who I am whether I am here or back home.

Priyanka: It's a toss between New York and Miami. I love them both and each has their own unique vibe, which is why I find it hard to pick one.  Also given all the time I’ve spent in LA recently, I’m really beginning to love this city as well. 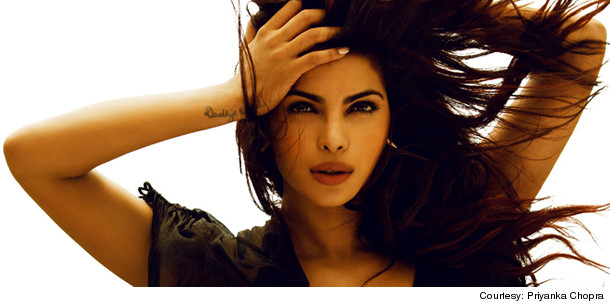 toofab: Who else would you like to collaborate with?

toofab: Has your beauty queen background helped or hindered your career?

Priyanka: I won the Miss World title when I was just 17 years old. From meeting world leaders to spending time with orphaned children in war torn countries, made me grow up really fast. It has definitely helped me in my career.

toofab: What other projects are you working on?

Priyanka: I recently lent my voice for a Disney animated film "Planes" which releases on August  9, 2013.  I am also currently shooting for two films in India. And, I’m also adding the finishing touches to my next single and my album!

Mr. Peanut Dead at 104, Killed In the 'Ultimate Selfless Act'

Prince Harry's Net Worth: How the Royal Makes His Money 19 Movies About Cheating We Secretly Can't Stop Watching Meghan Markle and Prince Harry May Sue Over the Latest Paparazzi Photos of Baby Archie