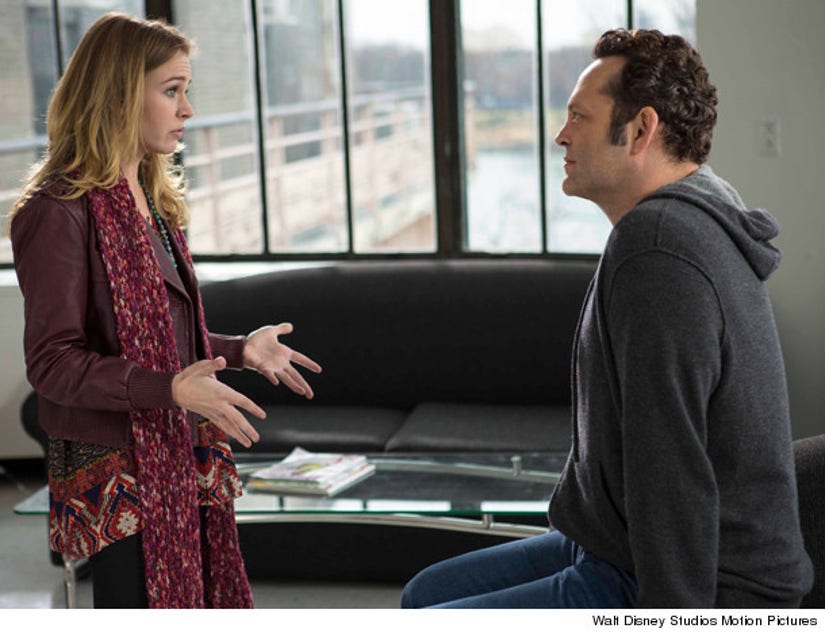 “Delivery Man” stars Vince Vaughn as jovial underachiever David Wozniak, whose anonymous donations to a fertility clinic 20 years earlier resulted in 533 children. David must now embark on a journey that leads him to discover not only his true self but also the father that he could become.

In his quest to find his kids, David meets Kristen Lawrence (Britt Robertson), a heroin addict who is spiraling out of control. He comes into her life just in time, ultimately saving her life on the day they meet.

Actress Britt Robertson spoke to toofab's Rachel Hoffman about what attracted her to the film, working with Vince Vaughn and pranking George Clooney!

toofab: How did you come to this role?

Britt: I auditioned for this movie eight times! I think I put it on tape in six different states. Yeah, I was really fighting for it. I put it on tape a bunch of different times and they sent me notes ... and eventually, they cast me and it was awesome.

toofab: What was it like to work with Vince Vaughn?

Britt: Vince is awesome. He's so good at his job, and he's so good at so many aspects of his job. I was able to take a lot from him. There would be so many times where I would literally just watch him. He was just really fun to work with. He gave me something new every single take.

toofab: So, does he improvise a lot?

Britt: Yes, he does improvise a lot, but in this film, they wanted to stick to the script. Even when he's not improvising, he will come in a different direction every single time. He never does the same take twice. Working with him was a really fun time for me.

toofab: Was this role difficult to play since she's so different from you?

Britt: Yeah, I'm not a total drug addict, just slightly. (laughs) It was a really cool role. When we were filming, they always wanted it to be Vince's journey. So, they follow him up the apartment and he only gets a sneak peek into my emotional state. He has no idea what I'm talking about or what I'm saying, but I'm clearly not doing very well. That part of it was really fun because they would be on him and I could go crazy in the back room. I would get a reaction out of him and play off of that.

toofab: As an actor, is it easier to do something completely different than yourself?

Britt: It is. For me as an actor, you always sort of want to bring yourself to a character in some way. You want to find a way to approach something in a way that's real and interesting, and also so there's some empathy there. It's a little more difficult when I haven't been through something, having to create those scenarios. But also, it's easier because you aren't mimicking how you are in life. Creatively, you're imagining these situations to be real. So, it's easier and also harder in some ways. It's challenging, and I think anything that's challenging is fun.

toofab: Did Vince do any pranks on set?

Britt: For this film especially, he was trying to bring a very real tone to the film and keep it kind of low key, but then we had these moments where he wants to improv a little and go back to his comedic roots. No, I don't ever remember him pulling any pranks, but he's just a funny guy. He's funny to have around. He will just go on rants for hours! He had all of us in awe, saying "what is he going to say next? We love you, Vince, you're awesome."

toofab: You're shooting "Tomorrowland" now. What's it like to work with George Clooney?

Britt: George Clooney is actually a huge prankster. That's sort of his jam. I had no idea. You see George Clooney and you think he's suave and handsome and really charming, but he's such a goofball! He's been on a little bit of a hiatus from us, so we have a few pranks lined up, just to make sure he's comfortable. Apparently, there are no pranks that he's not comfortable with.

toofab: What is your dream role?

Britt: I'm actually doing my dream role. It's pretty true. I never knew how to answer that question prior to this, but "Tomorrowland" is probably my dream role. It's a huge movie with action, and so much heart and emotion, but it's fun and funny. I get to do anything and everything that you could imagine, and I get to work with really cool people. So, I'm doing it, I'm living it. I remember the moment that I realized that I was going to get the opportunity to be in my dream role, and I said, "I just don't think life gets any better!" You have to take that moment and expand it for as long as possible because it's such a cool feeling. I just wish it would last forever, and it does, if you let it.

toofab: Do you have any spoilers for Season 2 of "Under the Dome?"

Britt: I don't know anything about the second season. They keep it under wraps, and I'm not even sure they know what's happening. I know Stephen King is writing our first episode. If Stephen King is writing it, there's going to be some blood and guts and sex scenes galore! He's very racy, so I can almost guarantee you something of that nature.

toofab: What are your favorite TV shows right now?

Britt: I am watching "X Factor" like a mad woman. I love Tim Olstad! I was really hopped up on one of his performances, so I was tweeting about him like crazy. When he almost got kicked off, I was like, "What is "X Factor" thinking?" So, then he tweeted me and I had to retweet him. So, now it's just a brand new relationship. But, Alex and Sierra! I mean ... I love them! I'm also really into "The Originals." My friend is on it, so I started watching her, and it's really good. It's really addicting! Those are my two favorites, oh and, "Parenthood." That's my long time love.

toofab: Who are your style icons?

toofab: Are you a T-shirt and jeans girl?

Britt: Yes, definitely. I'm actually more of a pajamas girl. Not so into the glam. I'm always photographed at 6:00 a.m. in my pajamas, on my way to set, with no hair and makeup and a coconut water. I need to work on that, but at least I'm being healthy!

Check out Britt Robertson in "Delivery Man" when it hits theaters on Nov. 22.