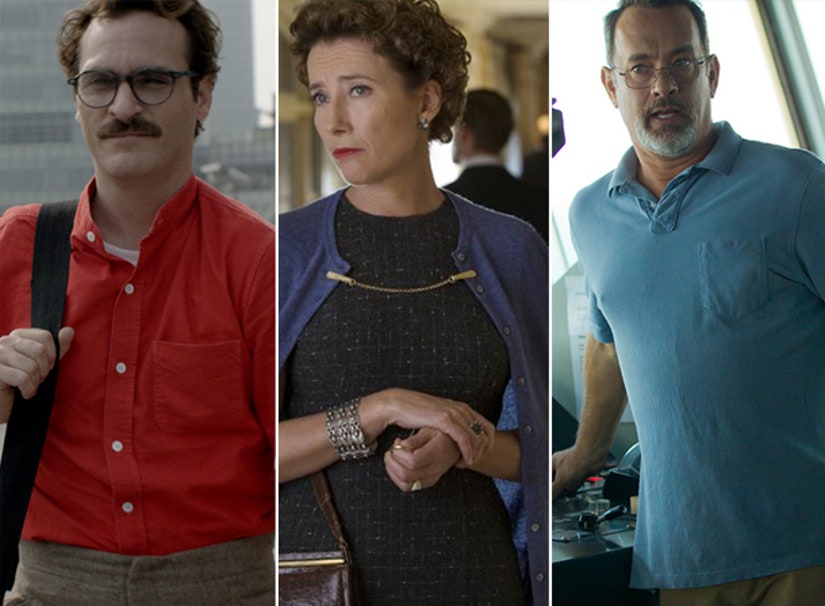 There were definitely a few glaring omissions when Chris Hemsworth read the Oscar nominations early this morning.

And while stars like Jennifer Lawrence, Amy Adams, Chiwetel Ejiofor, Leonardo DiCaprio and Matthew McConaughey all scored their expected noms, quite a few BIG names were noticeably absent.

So, who got snubbed? Keep reading to see our biggest disappointments.

When casting was first announced for "Saving Mr. Banks," everyone thought it was a shoo-in for numerous Oscar nominations. So consider us surprised that neither the film or its two lead actors, Tom Hanks and Emma Thompson, were honored for their work. Thompson's absence in the category is the biggest shock here.

While Hanks did a great job as Walt Disney, it's his work in "Captain Phillips" that we thought would garner a nomination this morning. The film was nominated for Best Picture and that has a lot to do with Hanks' portrayal of the title character.

The film was also slighted in the Best Director category, as Paul Greengrass also failed to get recognized for his work.

Another film that was short a few nominations was "Her." While it was honored with a Best Picture nom, stars Joaquin Phoenix and Scarlett Johansson failed to get acting nominations. Both stars were irreplaceable in the flick. While ScarJo was considered a long-shot since her work was all voiceover, Joaquin's slight is surprising.

Films like "The Butler" and "Fruitvale Station" were totally shut out as well, with Oprah Winfrey's lack of a nomination being the most surprising thing about those snubs. And "Mandela: Long Walk to Freedom" was only nominated for Best Song. Sorry, Idris Elba!

Other snubs: Robert Redford didn't score a Best Actor nom for his work in "All Is Lost," "Before Midnight" losing out on Best Picture and James Gandolfini failing to be recognized for what would be his final film role in "Enough Said."