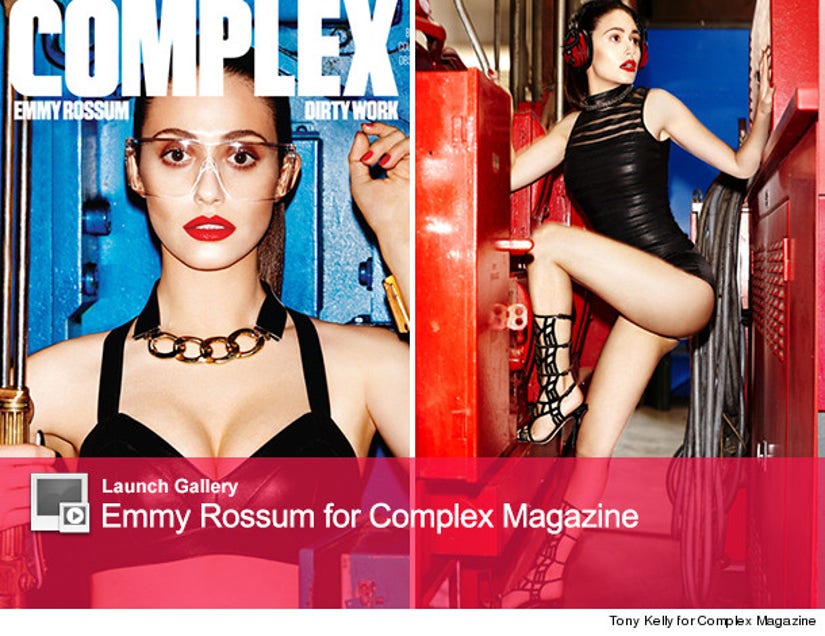 The "Shameless" starlet is showing off her hot bod in the February issue of Complex magazine, stripping down in a dominatrix-inspired photo spread.

In one photo, the brunette beauty is wearing a skin-tight black leotard and thigh high leather stiletto boots as she gets hoisted up at the waist by a crane.

In another racy pic, Emmy is rocking a high-neck black leotard with strappy stilettos, as she climbs onto a big piece of machinery.

The actress has gotten rave reviews of her portrayal of Fiona Gallagher on the hit Showtime series, a role that's required her to appear nude in sex scenes. While her character is very open about her sexuality, Emmy is much more reserved in her personal life.

"In the beginning I was hesitant and nervous to do scenes like that," she told the mag. "I cared about how it would affect my real life. And it has affected my real life. People think that I am a much more sexual person than I am because they identify me with the character."

"I'm not like her in my real life. I've never had a one-night stand. Ever," the 27-year-old added. "The one quasi-one-night stand that I had evolved into a two-year relationship. I was like, Is there something wrong with me, or them?"

We love how open Emmy is about her sexual past, but what do you think about her candid comments? Sound off below, and click "Launch Gallery" above to see more pics from her sexy photo shoot!