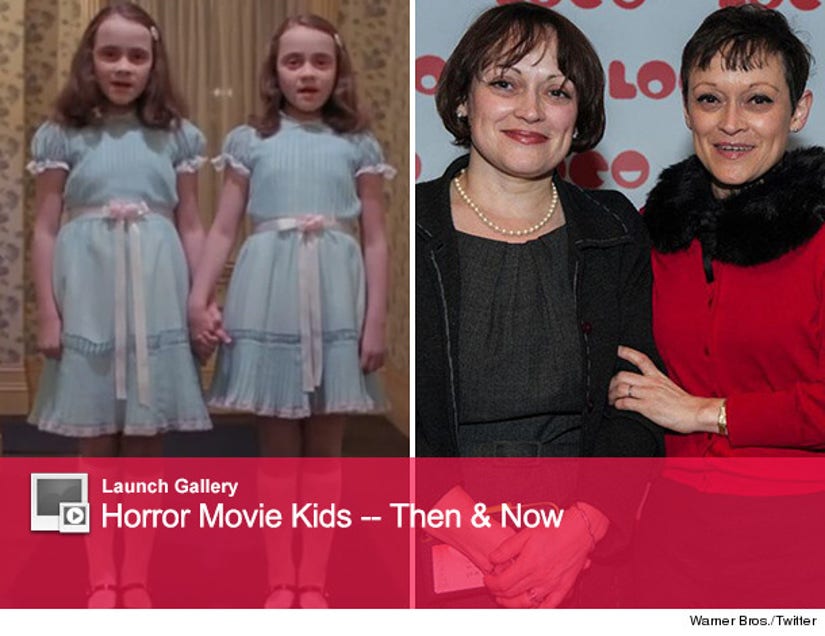 While they may reappear in our nightmares from time to time, the infamous twins from "The Shining" have been largely MIA from the public eye since the film's release almost 35 years ago.

After making a surprising red carpet appearance last month for the 50th anniversary screening of "Dr. Strangelove" at the LOCO London Comedy Film Festival, toofab's Brian Particelli reached out to Lisa and Louise Burns and asked them about how being in the classic fright flick changed their lives.

Check out the exclusive Q&A below!

While you were making the movie, did you ever think "The Shining" would have such a big impact in the film world? What was it like being on that set?

We were very young when we made "The Shining," Only 10 or 11 years old. We knew the other actors [including Jack Nicholson and Shelley Duvall] were famous but everyone was very welcoming.

[Director] Stanley Kubrick was very family-oriented person, I recall his daughter Vivian was there a lot. Everyone was very down to earth.

What was it like for you two when the movie was released? Did it change how people reacted to you in public?

Films then weren't released to huge fanfare like today. I recall someone phoned from the production company to say the film was coming out but other than that life carried on much as normal.

As "The Shining" was released in the UK with an 18 Certificate [equivalent to an R-rating in the US], we were too young to see it in cinemas.

One big difference was the London Evening Standard's film critic, an acquaintance of Kubrick's, Alexander Walker came to our school play and wrote up his critique of our performance. That wouldn't have happened without the film!

How often do people ask you to say "Come and play with us?"

On Twitter, a lot. We always wonder, is it creepy when your twitter feed gets the message "@shining_twins are following you"? [Editor's note: No, it's awesome!]

Will we be seeing more of you in public now?

We are venturing slowly into the world of horror conventions.There aren't so many of these in London where we are based. We are doing our first one at Monstermania in Cherry Hills, New Jersey from March 7th to 9th. We are also at the Autographica event at the Radisson near Heathrow London on March 23rd. .

We'll be signing/taking photos there for people who would like to come and meet us. All being well, we hope to do more conventions both this year and next, which as you probably know is the 35th anniversary of "The Shining's" release.

What has the reaction been like since you reappeared in public in February?

It's been fantastic to hear via Twitter and Facebook of the impact the film and our small role has had on people.

The response has been overwhelming. It's really amazing when people write such nice things and they don't seem to have minded being scared at all!!

It's personally very rewarding to hear how much people enjoyed "The Shining" and we try to respond to everyone who contacts us.

And check out the gallery above to see what more horror movie kids look like today, including the one who played little Danny Torrance!